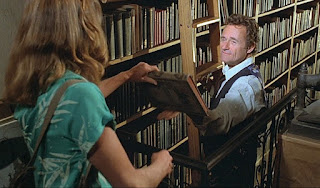 None of these ring a bell for me, so I'm hoping one of my lovely TMHF readers will recognize them:

1. Possibly as early as 1969, no later than 1973.  COVER ART: in the background, there is a huge hulking silhouette behind a house window--inside the house. In the foreground is a shotgun--from the shooter's POV--blasting away at the silhouette.  CONTENTS: A group of suburbanites are under attack and running from an enemy--I can't remember now if it's gang members, the Commies, space aliens or who. The main gist of the story was the way that the worst in a lot of these people came out, and what they started doing to each other. Sort of an R or X rated variation on THE MONSTERS ARE DUE ON MAPLE STREET.  It also delivered on the violence promised by the cover.  There were a lot of raunchy situations and dialogue.  At one point, a villain gets the upper hand and threatens to rape one of the women all three ways…”Maybe the seed’ll meet somewhere in the middle!”

2. This was a paperback I read back in the late 80s-90s, out of my dad’s collection. It may have been published earlier. Not a typical incubus-succubus story, the main villain is a mythological immortal, half woman half-snake creature, possibly called Lamia or Naga, who feeds on blood and can possess people's bodies.  The plot I can remember: The protagonist is a single woman with a teenage son. The creature possesses the body of her sister and then comes to stay with them. The woman begins to notice odd things, and the sister begins killing random people, transforming from human into its snake woman form and draining them of blood. The first of the attacks is a girl from the local high school, very athletic, and the creature finds the smell of her blood irresistible.  More people die. There is a hint of a past lesbian relationship between the protagonist and another woman—the other woman ends up being targeted and killed by the creature as a warning not to pry. At some point, the sister leaves and takes the teenage son with her and seduces him. He returns later, but the only thing he remembers is ‘she kept putting me to sleep.’  The woman contacts the sister’s employer and discovers that her sister had been ill for several weeks before coming to see them. I think she learns about the creature possessing her and decides killing her sister is the only way to stop the evil. Thinking that’s the end she walks to the body, but the creature is waiting for her, thinking something like ‘It was a good body” and starts to speak the words for possession. Found! 1981's Ludlow's Mill. 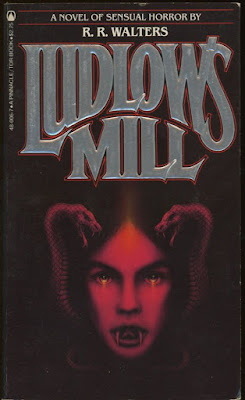 3. On the cover, background was black or very dark blue, and it the extreme foreground was a noose.  A young man was coming up behind it.  He was white with short blond hair that curled on top, and wore a blue suit with a white dress shirt and dark tie.  On the left side the man's face had a look of horror, but on the right the face looked more eager, the mouth closed.  It looked like it might have been two of them coming up to the noose, but the outer edges of the noose covered part of their faces so it looked more half and half. Found! 1988's Surrogate Child. 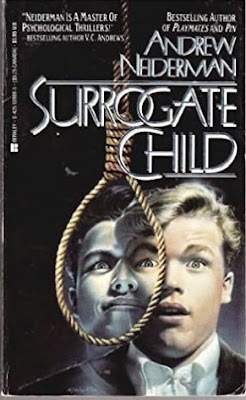 4. The cover was dark, and depicted a sort of "Solid Gold" (the tv show) stage set, with large squares. It was a photograph, not a painted cover. And there was a single hand extended from behind one of them.

5. 1966, 67, somewhere around there, I read a story involving a boy who wakes up to witness small, lizard-like creatures entering his body and carrying away bits of it. Of course no one believes him, and this keeps happening. He discovers the creatures are somehow taking the place of the bits they carry off. In the end, he meets a copy of himself, assembled from the bits that had been stolen, and when this copy announces itself as the real boy, our protagonist disintegrates into a swarm of the lizards.

6.  The basic plot was a newlywed guy discovering his new wife was a member of some cult. She slips him a sleeping pill and sneaks down to the beach every night to engage in some weird ritual that involves crocodile critters coming out of the sea (they were called Sobeks, like the Egyptian gods) and eating dead bodies, and the cult leader sucking the life force out of his underlings.  Over the course of the novel, we find out that he was from Atlantis, and became a life force sucking vampire who can shape-shift. He is looking for his Atlantean lover who fled from him. Found! It's 1984's The Fellowship. 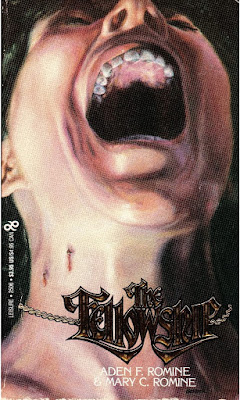 Well, now that I need it I can't find my copy of it to verify it for certain, but I'm pretty sure the second one is Ludlow's Mill by R. R. Walters. https://www.fantasticfiction.com/w/r-r-walters/ludlows-mill.htm

Thanks for the help guys! I've forwarded the info to the seekers.

Hello. I believe I can help you identify the novel described in Horror Fiction Help XXII. This answer is for the #2 request describing a possessive serpent creature. The creature is in fact called Lamia according to the author and based on classical mythology. The book is called "Ludlow's Mill" by R.R. Walters. 1st publ. July, 1981 / Tor fiction. I read this book a month ago. The coverart is fairly sinister and probably in my top 30.

Yep, I finally tracked down my copy and skimmed it, and the second one is, indeed, Ludlow's Mill.

Regarding #1: A member The Best Horror Comics, Books, Magazine Covers Ever! group nailed it for me: NIGHT OF THE DAMNED by Leonard Caine, Berkley Books 1973.