The Sweet Taste of Burning by Paul Andreota (1972): Witchery Weakening 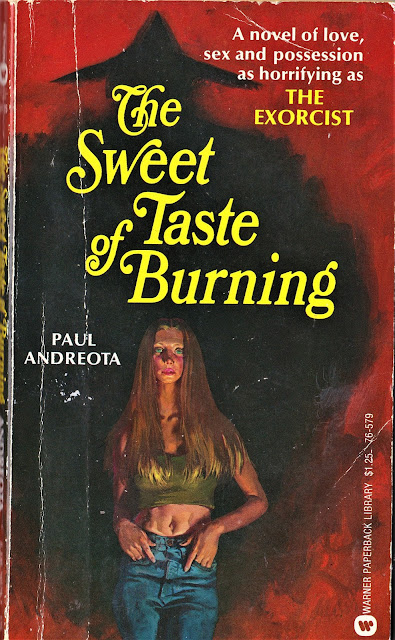 Slim oh-so-Seventies French novel detailing the life and loves of, well, French sophisticates who get mixed up with the supernatural. Savor The Sweet Taste of Burning (Le Piège in French, "The Trap"; this edition from Warner Books, Sept 1974), a mild romantic thriller with witchy undertones. Journo Serge heads to the countryside to investigate occult goings-on and regular old murder at the behest of his scandal-hungry editor—the Golden Age of peasant witchcraft, old boy! There Serge goes looking for the local healer/shaman, Bonafous, but he first meets the man's niece, Teresa, and quelle surprise things slowly start to ooh là là. Cue middle-age crisis for Serge! 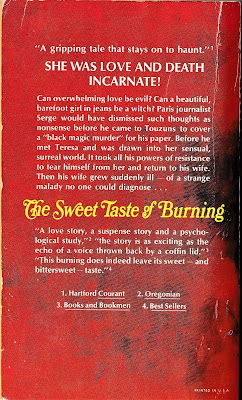 Then Serge's wife gets sick, and it's the same type of sickness that had plagued some now-dead folks in the country town where Bonafous and Teresa live, the reason Serge went there in the first place. Could Teresa, in a fit of jealousy and cold hate, cast a spell on her? In this day and age? Unbelievable for modern, sophisticated people to entertain. Carry on like this and you'll soon go completely mad yourself... 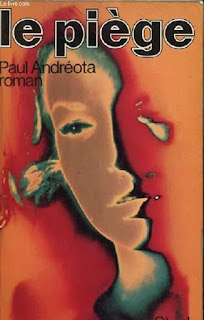 Our author, Paul Andreota (1917-2007), wrote novels of suspense and witchcraft, sez the paperback's bio page, as well as screenplays for French films I've never heard of (decidedly not the arty Truffaut/Godard type) ranging from the 1950s to the 1970s. Looks like he enjoyed himself, seems a regular bon vivant type here: 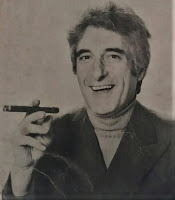 The book reads easily enough, if it's the sort of thing you like, but any comparison to contemporaneous works like The Exorcist or Rosemary's Baby is wildly overstating the case. Much of it reads like an obsessive hard-boiled novel of fatalistic love but with that tinge of the otherworldly, especially the final pages. But it's too little too late. 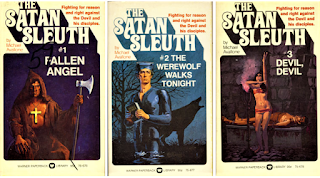 Although I was intrigued by the idea of a French occult novel, the main reason I bought Sweet Taste was for that sweet cover. Artist Charles Sovek, best known for his work on the early Seventies series Satan Sleuth published by Warner Books (and prominently featured in Paperbacks from Hell!), has a moody model evoking just the right amount of come-hither crazy ("Sometimes at night I'm two people," she tells Serge at one point). Not a terrible book overall, nothing I'd recommend, but you could—and probably do—have books with worse covers in your collection.

Posted by Will Errickson at 5:09 PM