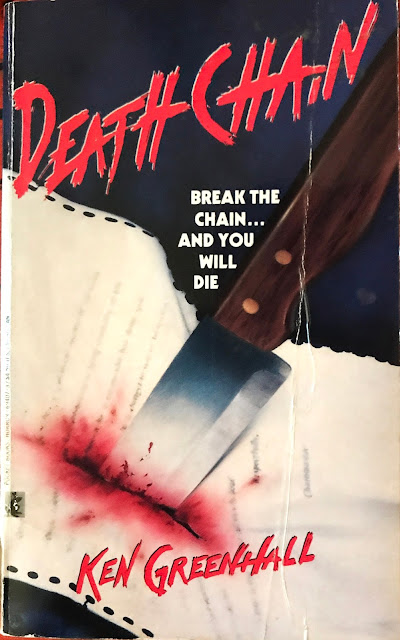 Chain letters have long poked and prodded at the deep superstitions seeded deep in even the most rational minds; even while one is tossing them in the trash it's a creepy thought that someone out there thinks so little of their fellow humans that they will compose a missive of vague threat and malice intended to motivate behavior for selfish gain. Kinda gross, actually, as it implies the letter-writer knows something about you that you yourself do not. Which is what's behind Deathchain: the Chainmaster, as the letter-writer refers to itself, knows There is someone you wish were dead. And so begins the novel, with youngish clock-repairer Dwight Bailey murdering an old indigent woman as instructed by a letter he's received. Rather than creeping Dwight out, the letter pleases him, flatters him, inspires him. He will do what it says because  there is indeed someone he wishes were dead, someone who never pleases or flatters him or notes how careful and perceptive and resourceful he is: that person is his hateful mother. And so the chain, though its beginning to us is clear, will not be unbroken. 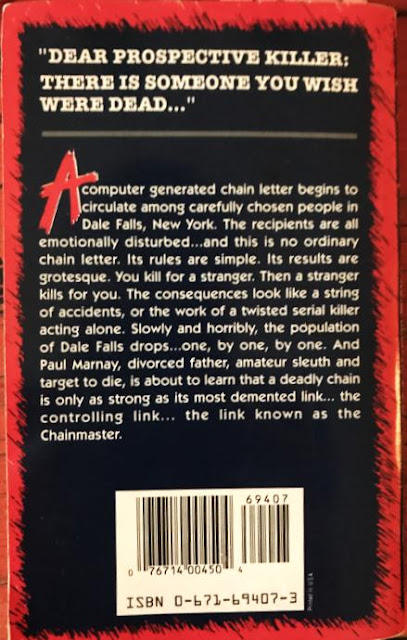 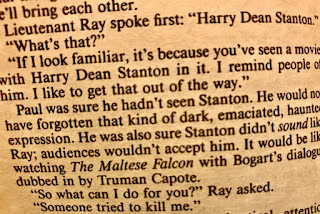 Posted by Will Errickson at 9:12 AM

Excellent review. This is the only Greenhall I'm missing. I did read CHILDGRAVE last year, and it's very nearly on the same level as ELIZABETH and HELL HOUND, imo. A clever mixture of horror and humor (btw thanks for bringing this author to my attention back in the day).

I have all five of his books -- ELIZABETH, BAXTER (aka HELL HOUND), CHILDGRAVE, THE COMPANION, and DEATH CHAIN -- and while I've enjoyed all of them to varying degrees, none of the other four hold a candle to BAXTER...there is something so uniquely special and compelling about that novel, one that shows an author truly running on all cylinders.