The Legacy by Jere Cunningham (1977): That Demon Life Got Me in Its Sway 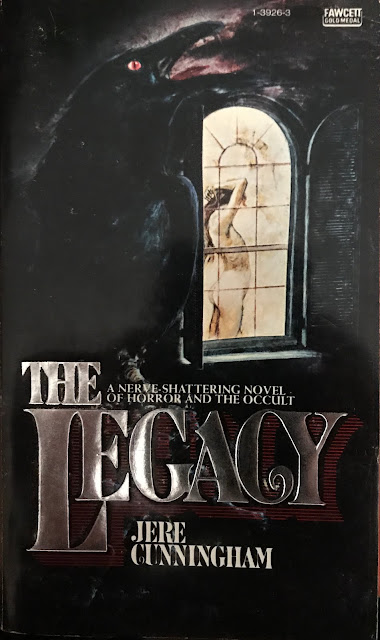 You might or might not be familiar with the name Jere Cunningham, a writer who published several horror paperbacks during the classic vintage era but who moved on to Hollywood screenplays later in his career (couldn't turn up a photo of him anywhere, only an illuminating interview, and I'm never sure if the name "Jere" is pronounced "Jare" or like the standard spelling "Jerry"). Not to be confused with that other late 1970s horror paperback of the same title—a novelization of the Katharine Ross/Sam Elliott/uh Roger Daltry movie—Fawcett Gold Medal's The Legacy, with art-student nude-model cover art and a cawing raven 'cause ravens are always spooky, is a 1977 paperback original. Cunningham's not a complete unknown, as other books of his have been rediscovered, but I haven't read any. That could change, since I found The Legacy to be an effective horror read, with all the hallmarks of its day and few of the faults.

A prologue of mysterious import on a stormy night, death, madness, and despair, sets the stage (and not in italics, thank the gods!). Then switch the scene to Dr. David Rawlings, wife Sandra, daughter Melanie, and her Doberman Streak; he's a successful Memphis doctor but as the novel begins he has an upsetting dream about his estranged father one night. Chester Rawlings has died, suicide by gunshot—a-ha, that prologue! Father's lawyer calls David to break the news, maybe they could come to the small Mississippi town of Bickford in which David grew up in but left for med school against Chester's wishes, to where his father met his untimely doom. 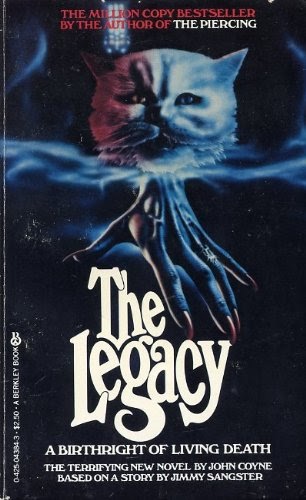 You've got the wrong Legacy

He reacquaints himself with the old family estate, Whitewood, and its attendant memories, including old Sam, his father's stalwart friend, who in many ways raised David himself. Sam gets off one of the creepiest lines in the novel, one night when they're trying not to talk about the weirdness going on as they watch the Mississippi beneath a bright moon: "They says if you sleep under the moon without a rag over your face you go moon-crazy. That the moon got blood on it and it'll come down and get in your head." Uh, yeah, thanks for the advice, Sam.

Lots of pages are spent on the Rawlings marriage, of Melanie and Streak playing in the fields surrounding the estate, of David tooling around Bickford and realizing what a shithole it is and seeing old faces again. Other characters come into David's orbit: Dewey Pounds, with whom David had played football in high school, now Bickford sheriff well aware if he doesn't solve this issue of a missing body he'll be working in a gas station. There's sketchy teenager Woody, long-haired and resentful, son of Ruth, the local soothsayer living in a trailer and another old friend of Chester's. She drops mysterious hints and warnings, inscrutably vague (basically "You should get the fuck outta Dodge"). Then there is blind Philip Sprague, a man of perhaps 70 who looks younger (uh-oh), who arrived in town some years before and rebuilt a nearby old DeBois manor into a grand new edifice. 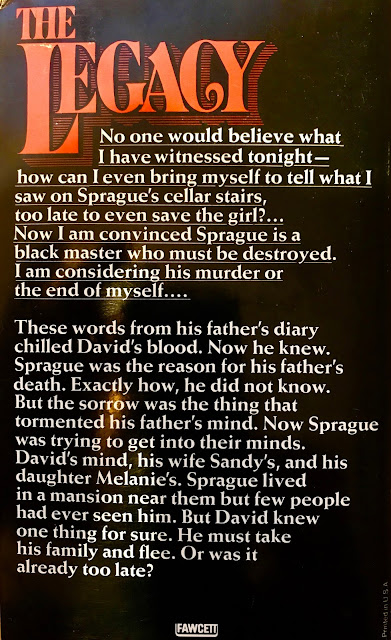 The first true note of oddness comes when dad's lawyer Barksdale reads the will and its requirements of David: "I ask that you stay on at Whitewood for seven weeks, never leaving for a single night. Check the seal on the crypt daily. Tend the ivy around the manor and my crypt. I am sure that Sam will stay on with you"—hold up hold up! Did he say check the seal on the crypt?! The fuck? Except Sandy seems to think it an unreasonable burden on David's burgeoning medical practice, but David knows he must do it. Unlike other sons in horror novels, in which family secrets metamorphose into supernatural elements, David loved and respected his father, even if they had grown estranged over his decision to leave.

Exploring his father's library one afternoon, David seemed to feel the hours and hours of his father's presence here. As if the man and years had soaked into the books and walls and floors. Chester Rawlings was a closet intellectual, reading ancient history and philosophy in Latin and Greek. But David is taken aback when he finds a new shelf of books on sorcery and witchcraft and whatnot. There's even a locked door with more spooky shit behind it. Wizard and sorcerer spooky to be precise:


Daddy, he thought, my poor daddy... is that what happened in your mind? Did fantasies kill you? Don't you know that one real cigarette is more evil than all that silly occult shit put together?... A foulness clung to his hands from the cloying leather. in the light the stretched hide looked almost like human epidermis... He left the room with a sadness tainted by revulsion. Never would he have dreamed his father—of all people—would have sought solace or refuge in an area so degrading in its vulgar absurdity. The foulness of the iron-bound book felt ugly on his hands. 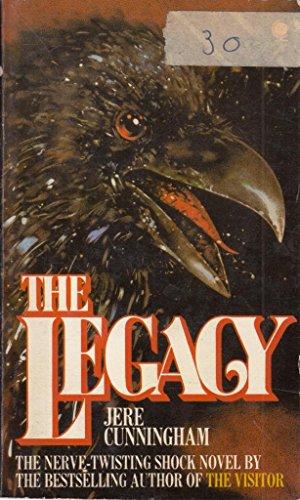 I don't have to tell you, dedicated reader of horror fiction, how important this is. This kind of exploration and discovery is one of my favorite genre devices. And Cunningham deploys it well; a foreshadowing that hovers even though it will be quite awhile before the payoff. Slowly but surely all kinds of horrible things will happen: a missing corpse, a vandalized crypt, a dead friend, Sandra sleepwalking, a figure following Melanie and Streak through the nearby woods. Add in a backstory of the recent suicide of a Bickford banker, the institutionalization of his wife, and the disappearance of their young daughter, and you've got a sweet potboiler recipe.

Eventually David finds his father's journal and learns Chester knew Sprague, also dined with him, was taken on a tour of the manor's foundation, and there saw something that drove him to near madness, breaking his heart and setting Chester into a morass of despair.

Now I am considering the murder of Sprague. Or the end of myself. No night of rest.... I spoke with Ruth. She is more afraid than I am, if that is possible, and she knows nothing we can do. What can we say about the little girl? What would the authorities believe? That we are mad? 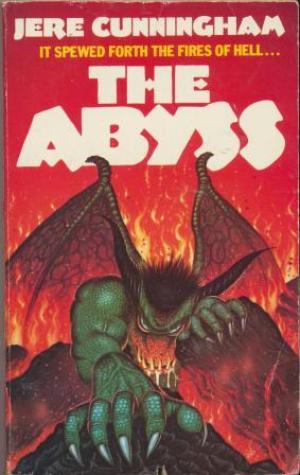 One of the best scenes in the novel is a dinner party, of course. Sprague invites the family to dinner, unerringly pouring them drinks and serving them an elaborate European meal. He is a continental sort and his blindness poses no real problems; in fact it seems to give him a preternatural sense for anyone around him. Après dinner Sprague entices Sandra—whose pretensions to culture and wealth he appeals to—to play for them on his luxurious piano, even joining in with her on his violin. What beautiful music they make ("That was really wonderful," she beamed, hardly able to retain modesty)! And you can be sure David isn't too happy about it. This sequence sets up the finale in high style.

I must admit though that early on, The Legacy had me iffy on continuing; there is a lot of build-up. The narrative tightens up considerably as the book nears conclusion, with occult horror and mayhem rampant, elevating this unassuming-looking paperback original beyond others of its ilk. Cunningham is adept at writing dialogue and character, mood and suspense: aspects horror writers much more famous and wealthy often suck at. Plentiful sex scenes are warm, believable, titillating but restrained. There are touches of early King in the depiction of modern family life while some gruesome set-pieces—David and the dog, David and the corpse fingers, Sandra sleepwalking with Melanie in tow—which reminded me of the work Michael McDowell would soon publish. Despite the leisure taken with setting the story in motion, once it kicks into gear, The Legacy delivers the demonic goods.

I dug the hell out of this as well. I hope Cunningham's other novels are on the same level. I've got The Abyss somewhere in my increasingly ridiculous to-read pile/pyramid.

Excellent job reviewing this one. I own this title and can't wait to get to it.

David and the dog - so we can expect some doggie death? It's funny, I love me some people being torn asunder but you kill off the little fluffy ones and I get all bothered. Still haven't been able to watch The Hills Have Eyes because of that...

Yes, you can expect it.

I had this book back in the late 70's and I think I read it but I'm not sure -- got a copy after reading your post about it and read and enjoyed it -- but honestly do not remember the plot at all. I read so many of these books as a kid that a lot of them just blurred together. Read Cunningham's The Visitor right after and it was also fun. But honestly, I think Cunningham was really a bit of a hack - which doesn't mean I don't want to read The Abyss as well.

Recently picked up a beautiful copy of the UK paperback of this, plan on getting to it soon.