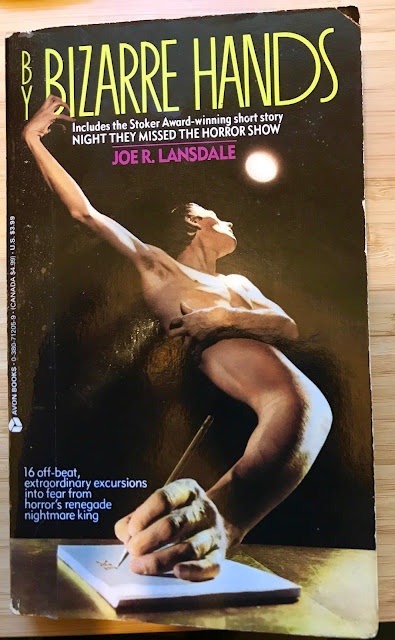 If you were a horror fiction reader in the late 1980s and paid attention to such things, you knew that Joe R. Lansdale was being marketed, if that's not too strong a word, in a manner not seen since probably Clive Barker. Their respective publishers knew, even if they couldn't put their finger on it exactly, that these writers were incredibly special (this has nothing to do with the individual styles of Barker and Lansdale, which are markedly different, only that they both went further, deeper, harder, than other even very good writers of that age did) and deserved to be widely read. Check out the cover copy, front and back, of By Bizarre Hands (Avon Books, Sept 1991): "Renegade Nightmare King"?! "May Be Hazardous to Your Health"?! These types of superlatives reach higher than the usual boilerplate encomium, and worked to entice readers who wanted more than just the latest humdrum hack horror.

I was ecstatic to be reading Lansdale for the first time in various anthologies back then; like many readers I'd never read anything like him. Sure there was the Vonnegut and the Twain, the Mencken and the Joe Bob Briggs, the King and the Matheson and the Bradbury, here and there a whiff of Elmore Leonard and Harry Crews (I noted these last two much later as I had not read them on my first encounter with Lansdale). But still there was something original, tough and sure and daring that sang beneath those familiar notes... and I wanted more. 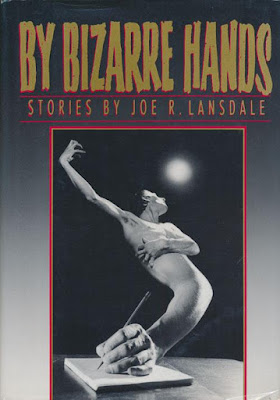 Around 1990 or so I paid big bucks for a signed copy of Joe's short story collection, the 1989 hardcover edition from specialty publisher Mark V. Ziesing. Consisting of his earliest as well as his major stories, I devoured it, loved it, but sometime later, during a bleak broke span during my college years, I had to sell off a major chunk of my limited-edition horror collection, so it was bye-bye By Bizarre. Ah well. Then a month or so ago a TMHF pal emailed a link to this Avon paperback edition from 1991, adorned with the same illustration as the hardcover, thanks to usual suspect JK Potter; it was in good shape and at a fair price, who doesn't love that. Sold! So it's great to have By Bizarre Hands back on my shelves. Couldn't wait to revisit Lansdale's singular landscape of horror, black humor, science fiction, crime, and whatever the hell else he puts in. 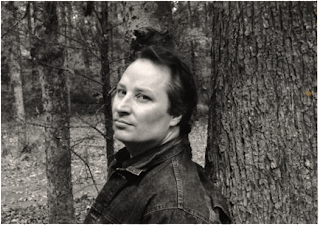 Lansdale often succeeds at impossible tasks, with setups that would make lesser writers blanch (or not even realize what deep waters they were in), and pulls them off with a tough, vulgar, self-conscious but not arch energy. He may wink at you but it's not a cute wink of "Hey we both know this is ridiculous" but a wink of devilish glee, acrobatic mischief, "You can't believe I'm getting away with this, can you?!" Like a sort of Tarzan swinging through the jungle hoping a vine will appear in the nick of time, you can't fault him because it all kinda takes your breath away even when his moves are occasionally clumsy or crude. His confidence and his trust in his own instincts, talent, character sketches, and unique vision thrills the reader, makes the reader forgive those tacky lapses scattered about (as if Lansdale were afraid of upsetting social niceties in the first place). YOU HAVE BEEN WARNED! 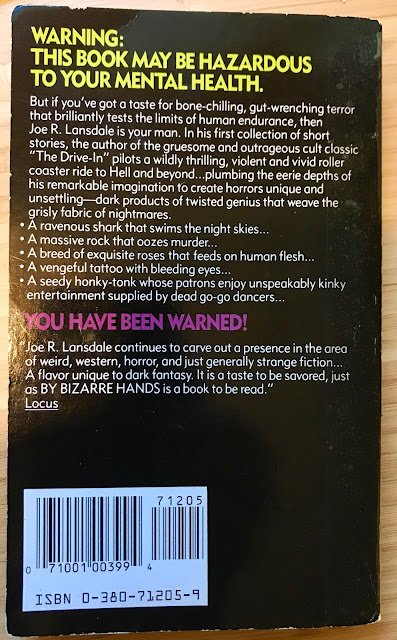 Let's get to the goods, right from the opener. "Fish Night," hearkens back to Bradbury's love of dinosaurs and other creatures of our earth's past, but lacks any wide-eyed nostalgic innocence. Nostalgic for the ravenous extinct monstrous creatures which swam that prehistoric sea, perhaps... "Duck Hunt" satirizes male camaraderie and companionship, machismo and violence masquerading as such. The terrific title story was also published in the first Borderlands (1990); I wrote a little about it here. It's tasteless, sure, sometimes you think, "Jeez, Joe, I didn't need to know all that," but that's just Joe: he's gonna give it to you straight, maybe chase it with pickle juice and gasoline. Then light the match. 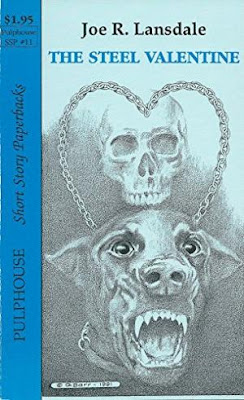 Ever read any of the Black Lizard reprints of 1950s crime/hardboiled pulp fiction? Not just Jim Thompson, but Dan J. Marlowe, David Goodis, Charles Willeford? Written with pulp muscle and a refusal to sugar coat with any moralizing, Lansdale presents the criminal lifestyle as-is, no returns, no refunds. More than one tale here reminds me of those stark, sere, brutal crime novels, particularly "The Steel Valentine" and "The Pit." "I Tell You It's Love" revels in the romantic sadomasochism of James M. Cain. "Down By the Sea Near the Great Big Rock" is almost whimsical, a Gahan Wilson cartoon come to life. And three stories became three novels: "Boys Will Be Boys" part of The Nightrunners; "Hell Through a Windshield" is the beginnning of The Drive-In; "The Windstorm Passes" became The Magic Wagon. All are must-reads, both the stories here and the actual novels themselves.

One of the very best stories included is "Tight Little Stitches in a Dead Man's Back," the title alone which has bounced around in my head for 25 years even as the details faded, is a mean little masterpiece. It's funny, sad, disgusting, outrageous, insightful, empathetic, painful, humiliating, gory, unsettling, a near-effortless melange of SF and horror tropes. His weirdo SF is kinda mind-blowing. I'm not sure what apocalyptic authors Lansdale read—John Brunner? JG Ballard? John Wyndham?—but it's just powerhouse stuff nobody else could've written. Guilt, hatred, regret, only these human emotions survive the apocalypse, along with monstrous thorny vines and mutated animals. Behold the surreality: 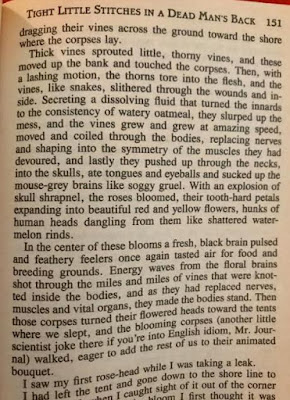 The collection concludes with two of Joe's most infamous stories, late 1980s classics that made a splash then and still retain their power decades later: "Night They Missed the Horror Show" and "On the Far Side of the Cadillac Desert with Dead Folk." The former contains some of the ugliest, most blistering imagery and dialogue for its time, and isn't even really a "horror" story in the generic sense; it's the blackest of noir, maybe. Scorched earth policy here, a glimpse of unfettered human depravity and ignorance, outcast kin to the blistering art and exploitation of, say, Taxi Driver or Henry: Portrait of a Serial Killer or James Ellroy's LA Quartet. If you haven't read "Night They Missed the Horror Show," I can't say you've missed a treat but you have missed a milestone in extreme fiction. The latter tale, from the zombie universe of George A. Romero (RIP!), is a long rambling road story of bounty hunters and the undead, plus lots of Bible talk (a staple of many a Lansdale), gunplay, and gore. You won't be scared but you will be impressed by its colorful energy. 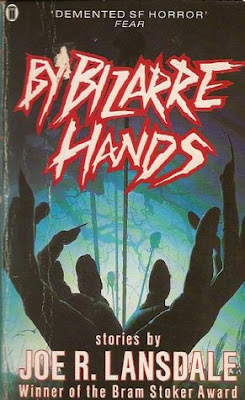 We all are aware of how unique voices can be forgotten, or become cult/fringe favorites, and never find a broader audience. Not so with Joe.  It's satisfying to know that today he has a bigger following than ever, with a movie and TV series adapted from his work (Cold in July and Hap & Leonard, respectively), and more and more award-winning novels. He is a friendly and supportive online presence as well. Reading Joe Lansdale is a free-for-all. For the adventurous, unsatisfied reader who demands more, more, more, I can say get your hands on By Bizarre Hands; it is an essential and uncompromising read.

I need to read this, as well as Lansdale's other horror-oriented material. Years back I read one of the Hap and Leonard and novels and enjoyed it enough. Recently tore through a copy of his much, much earlier serial killer novel Act of Love but didn't, er, love it. AoL was unthinkably vicious in bursts, but the rest was clunky dreck, very obviously a first novel. By Bizarre Hands sounds waaaaay more my speed.

My introduction to Landsdale was through a review in TWILIGHT ZONE magazine for his novel THE DRIVE-IN. I went out and bought the paperback which had a cover of a couple alien looking creatures on it. I loved it, lent it to my friends who also loved it, and who knows where that damn paperback ended up. Anyway, the next paperback I bought of his was this very collection in paperback, which I held on to. Years later he signed it for me when coming through the area promoting one of his Hap and Leonard novels.

Ooo~ I've never actually read Lansdale. I'm going to have to add him to my 'watch-for' list when I scavenge the library sales. I've pretty much cleared out all of my known authors but hadn't gone on the hunt for anyone new yet.

Thank you for the recommendation.

That's some creepy cover art with that hand/body.

J. k. Potter's photography was another shared branding of Clive Barker and Joe Lansdale, the two guys lumped in with Splatterpunk (understandably) who never gravitated to (or in Lansdale's case, appreciated) the label. Potter all over splat lit.

ACT OF LOVE is indeed not the best introduction to Lansdale, and while more self-assured, I'd suggest THE DRIVE-(N and its sequels aren't, either. But BY BIZARRE HANDS will do just fine. And I have a sneaking affection for "Bob the Dinosaur Goes to Disneyland," as intentionally shaggy-dog (shagging Sinclair dinosaur) as it is.

I wouldn't recommend ACT OF LOVE as an intro to Lansdale, and I don't think he would either! This collection is the perfect starting point; it has everything that makes Lansdale unique!