Scars and Other Distinguishing Marks by Richard Christian Matheson(1987): Do the Ultra Twist 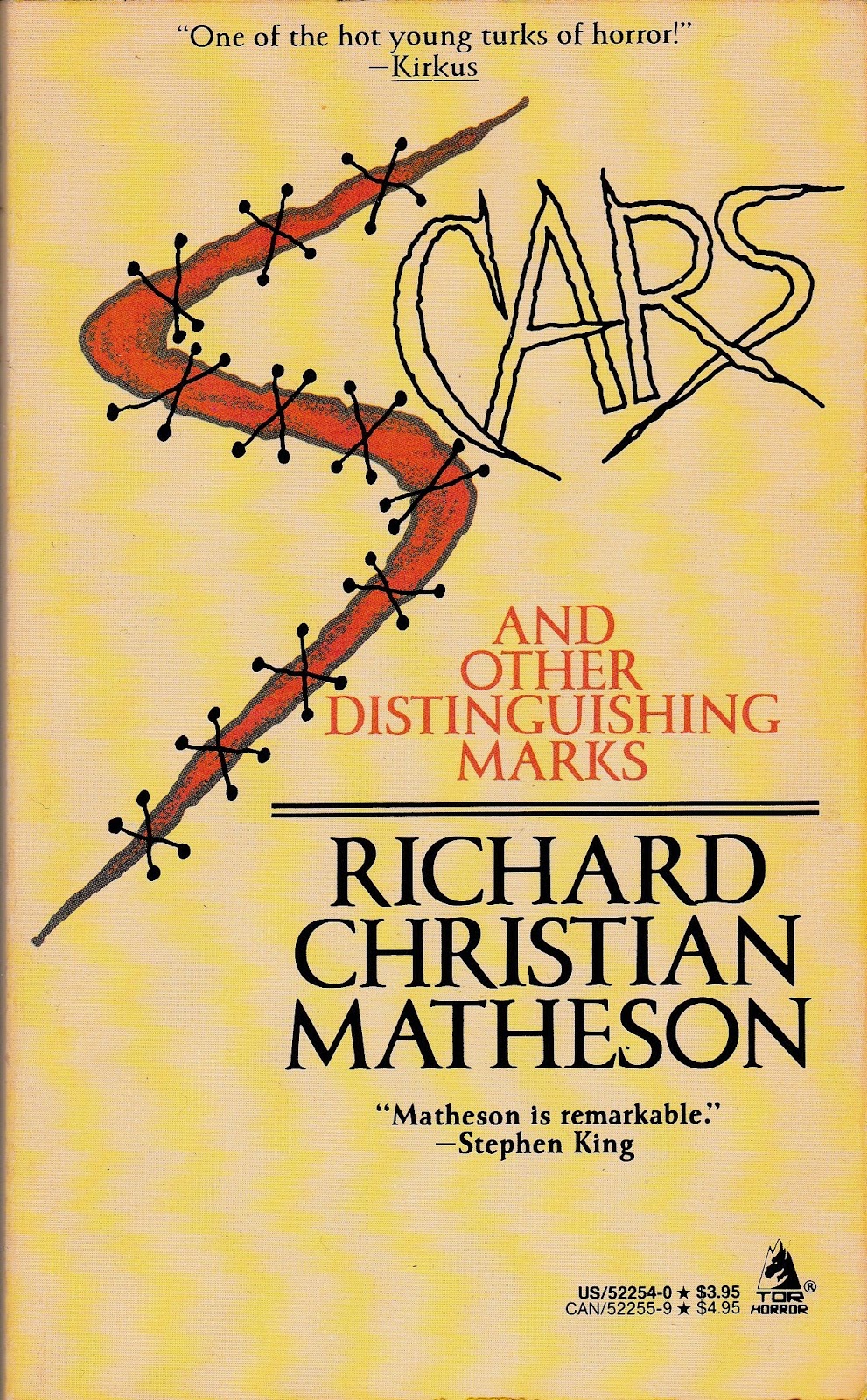 Long before Joe Hill made horror a family tradition, Richard Christian Matheson was born of legendary Richard Matheson and began cranking out short-short genre fiction that appeared in The Twilight Zone and Night Cry magazines and 1980s anthologies edited by Charles L. Grant, Dennis Etchison, and Stuart David Schiff. While his name alone could have gotten him published, Matheson garnered much attention in the field on his own skill for stripping his stories to the absolute bone, with some consisting solely of one-word sentences or very nearly that. During an era in which horror showed a tendency to bloat and stuffing, some editors and readers found Matheson's pared-down work refreshing, while still maintaining edge and bite. For a short while he was aligned with the splatterpunks, mostly because he was young and had a background in television (you know--so modern) and palled around with Skipp, Spector, Schow, et. al. My first experience with him was in 1986's Cutting Edge, which included "Vampire." It's just two pages of: 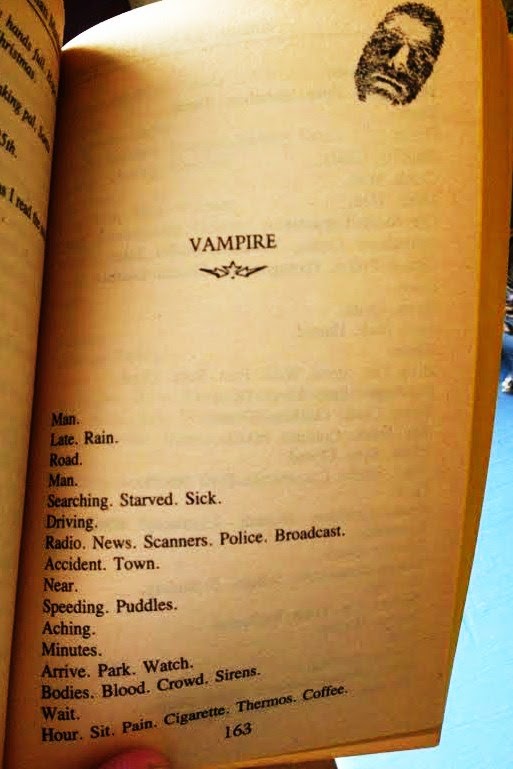 In the '80s I found it quite striking, and the title is more metaphor than literal. Today, I dunno, it seems more gimmicky than powerful. Which is the problem with Matheson's whole style of clipped brevity: does it engender more chills for the reader, is it essential to the story to be told so? What's frustrating about this wildly uneven collection (first published by Scream/Press in 1987, Tor Books paperback July 1988) is that the style is in service to stories that are threadbare and obvious, rife with twists and fillips that depend only on leaving out crucial details. Oh, the servant is a human and the served is a robot! Oh, they're not people, they're endangered whales! Oh, the little girl is death itself! If he'd just told us that stuff at the beginning then maybe there'd be an interesting story. Stories often end just when they should be beginning. They seem like tales told inside-out, writerly warm-up exercises to get to the good stuff. Except that never really happens, not like I remembered from first reading Scars in the early '90s. 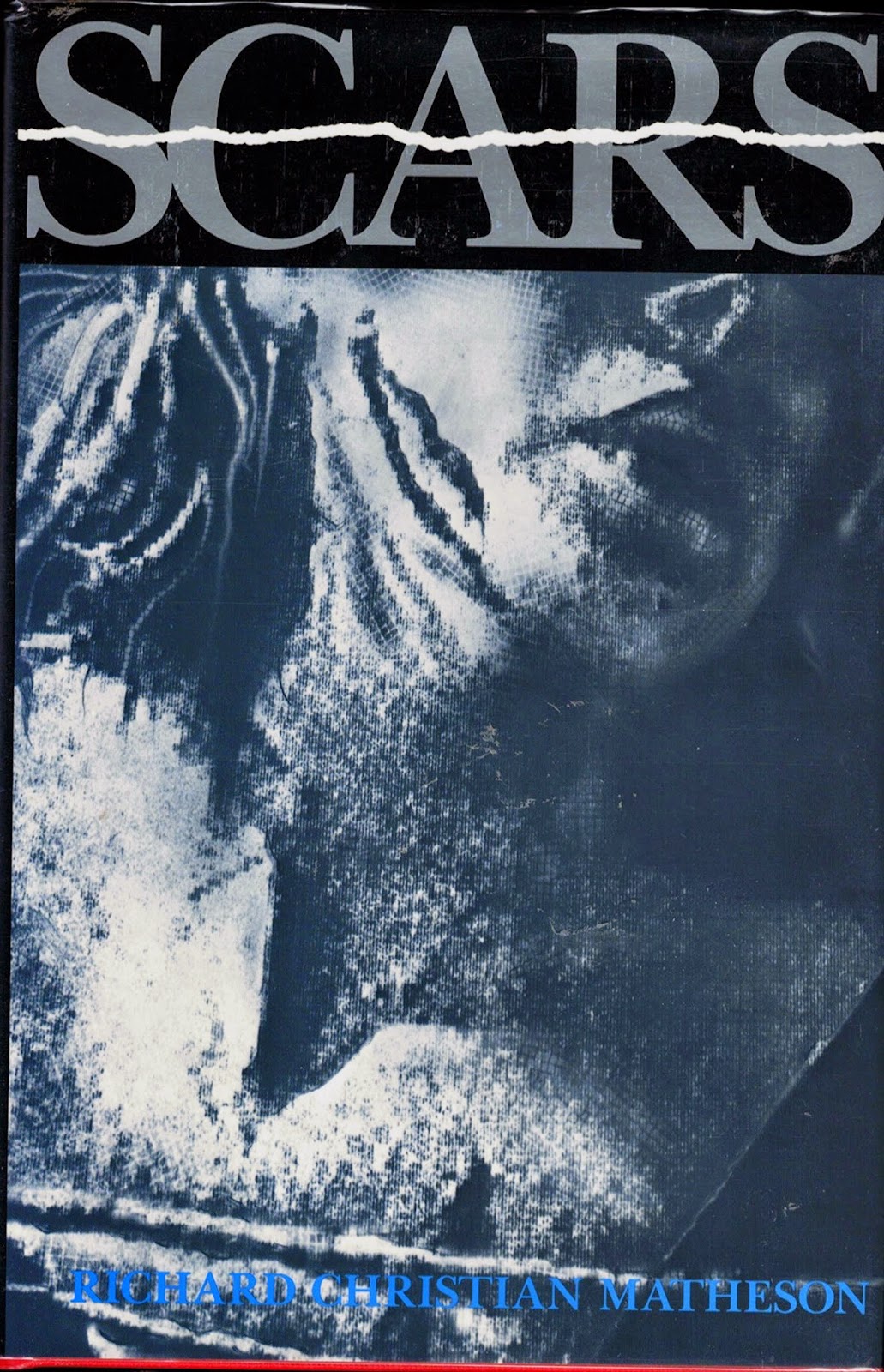 Too many scenarios are redolent of moldy "Twilight Zone" and "Night Gallery" tropes: beware "Sentences," "Obsolete," "Intruder," "Beholder," "Incorporation." Did Rod Serling come over and babysit a young Matheson?! Treacly beyond endurance, "Holiday" rolls out a real Santa Claus, while the 60-page teleplay for an episode of the Steven Spielberg-produced '80s TV anthology "Amazing Stories" is well-nigh unreadable. Ballplaying kids and their grampas and dopey dogs in a Norman Rockell town... oh god, spare me. Please. Try to read "Cancelled" without cringing at the ridiculous slangy stream-of-consciousness and labored satire of crass network television shows. "Conversation Piece" was done with more subtle chills, sincerity, and thoughtfulness by Michael Blumlein with his "Bestseller." Graphic unsettling violence rears an ugly head--or ugly bump--in "Goosebumps," a bit of meta-horror that would be silly were it not for the image of a guy stabbing a butcher knife into his own mouth. It's still silly but now it makes you wince, so...

Is it ironic that "Graduation," which I'd read in Whispers, is probably Matheson's best work, and it was his first published? Written with strength and style and its only gimmick is the letter-writer's references to "you-know-who" and even on this second read I have no idea who that's supposed to be. Unreliable narrators can be great devices for horror but not when the reader has no way to grasp the truth. Still, I found it vivid and unsettling; "Graduation" has a precision that briefer works lack. Other standout works--the aforementioned "Vampire," "Mr. Right," "Red," "Dead End"--can be found in various anthologies. Editors chose wisely (Paul Sammon included the broiling, LA's burning, high-pressure radio-DJ nightmare "Hell" in Splatterpunks). I believe it was "Red" that got Matheson attention in the first place, and how could it not? It's about SPOILER a guy picking up parts of his daughter's mangled corpse off the road after he accidentally dragged her behind his car. Of course Matheson doesn't spell that out like I just did and while it's pretty shocking it kind of stretches the boundaries of belief. Would the police and EMTs even allow that?! 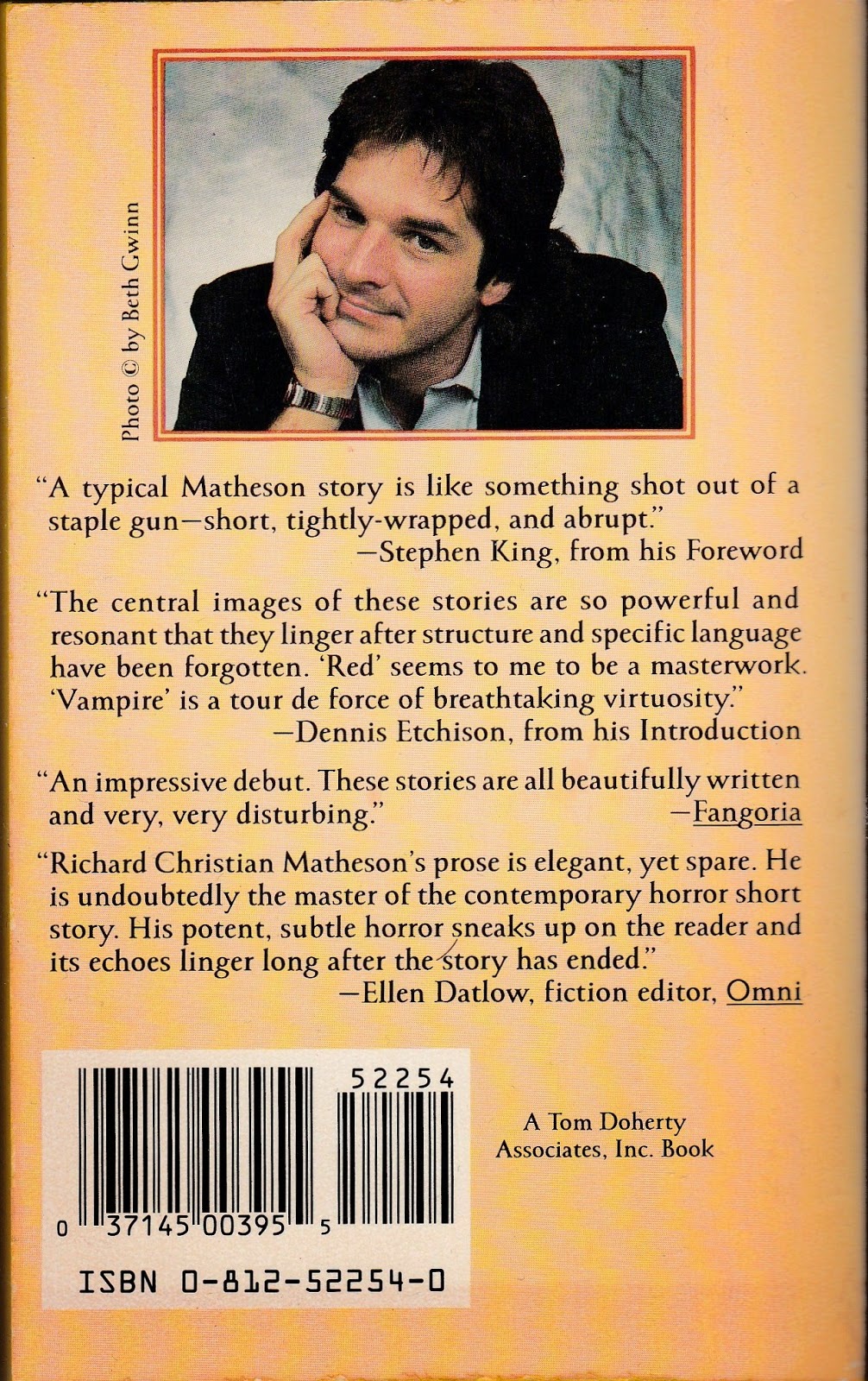 When you look at Matheson's TV-ography as a writer, it's prolific but the quality is actually rather dismal. Highlights include such well-loved but not terribly brilliant shows like "Three's Company," "Knight Rider," "The A-Team," and "The Incredible Hulk," as well as not so-well-loved and not terribly brilliant shows like "B.J. and the Bear" and "The Powers of Matthew Star." With that in mind, the horror stories make more sense: they're not changing the world, they're just entertaining you for 22 or 45 minutes or so. But they're entertaining you not because they've got a new vision; they're entertaining you because it's the familiar dressed up in unfamiliar garb. The only raison d'être is that twist, that surprise, so anything that would get in the way of that--character, dialogue, realism--is jettisoned. As I said, perhaps in the 1980s a writer could have gotten away with this--and obviously, he did!--but today, as a much more experienced reader and fan, I find Matheson's approach to horror fiction incredibly jejune.

I began to think of this collection as high-concept horror: ideas that seem intriguing at first but are little more than tiny gimmicks, not actual stories about real people and situations. His penchant for writing stories made up of one-word sentences is interesting at first, but when it's over you think, That's all? Despite the introductory encomiums from Stephen King and Dennis Etchison, I was very little impressed with Scars, and despite the Matheson family name, found it not very distinguishing at all. 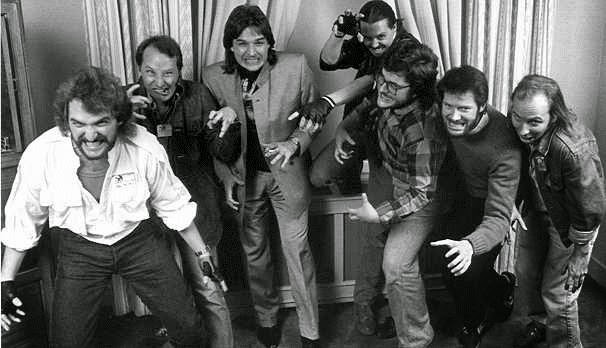 I do see your points and agree with several of them to a degree, but I would still contend that Matheson's short fiction is, for the most part, quite compelling and typically stands out among his contemporaries, in spite of those shortcomings you mention. I will concede, though, that read en masse the stylistic brevity that he often utilizes (and not always successfully) in his stories can be a bit much.

He has two other collections, DYSTOPIA and the upcoming ZOOPRAXIS (both pub. by Gauntlet Press), and while I won't argue that his later stories are substantively different that those early stories in SCARS, there is a sense that perhaps he has cautioned himself to not sacrifice story for stylistic brevity.

I first discovered him with the vampire tale and loved it, because it was different. I'm not sure I've read anything of his since. A couple of years back, my wife & I went on an A Team kick and got the first two series on DVD. The first is surprisingly good, I thought and when I saw RC's name on the second, I had high hopes but they were much poorer episodes.

As an aside, I met him briefly at WFC in Brighton and he came across as a really nice bloke.