The House on the Borderland by William Hope Hodgson (1908): Into That Great Void My Soul'd Be Hurled 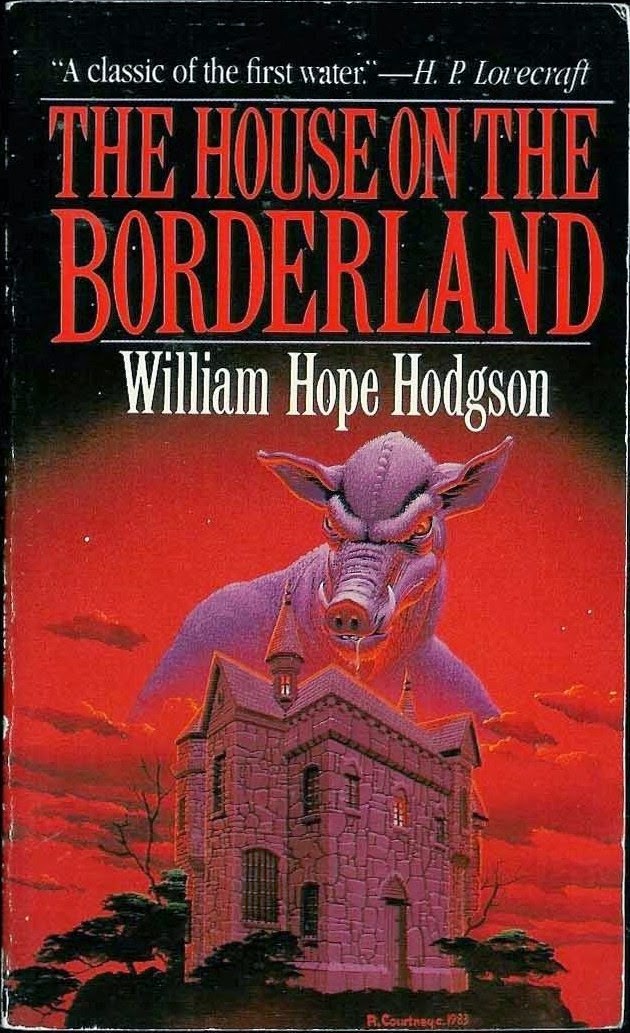 An unassailable classic of supernatural horror and science-fantasy, The House on the Borderland is a cosmic hallucination, a phantasmagoria of time dilation and psychedelic imagery, a monster mash of mind-expanding terror and loneliness across multiple dimensions and numberless aeons. William Hope Hodgson (1877-1918) reached for the stars and beyond and gave us a novel that would deeply affect and influence H.P. Lovecraft (and of course many other genre writers); indeed HPL never hid the fact that he was indebted to Hodgson's visionary delirium [update: not as much as I'd previously thought; see comments]. It is the well from which so much weird fiction has sprung. But is that well still worth visiting today? ...perched almost at the extreme end of a huge spur of rock that jutted out some fifty or sixty feet over the  abyss. In fact, the jagged mass of ruin was literally suspended in mid-air.

That's the house itself, as described by the two men who are tramping through the "dismal and and sombre" wilds of west Ireland. They come upon a striking landscape, a rushing waterfall and an enormous rocky cavern. Across it stands this house on the borderland, its crumbled remains high above the abyss. One of the men finds a crumpled old notebook in the debris; before the men can make their way back to their camp, an eerie wailing rises from the woods. Filled with "haunting dread," they hightail it out of there and read the manuscript later. Said manuscript is a nameless narrator's account of his life before this house fell... 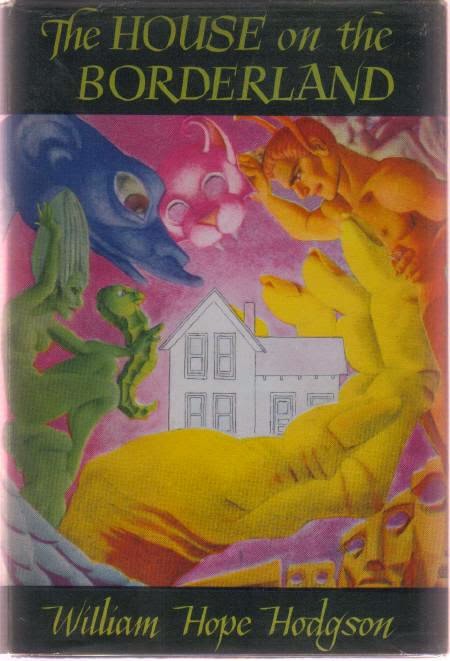 A widower who lives with his spinster sister and dog Pepper, the narrator relates how he'd moved into the garden-surrounded house 10 years before, that locals had said the devil built it, and that as years passed he became "aware of something unseen, yet unmistakably present, in the empty rooms and corridors." I'll say. Soon he's exploring the lightless depths of that chasm--"the Pit," he calls it--and battling with loathsome swine-monsters who swarm over the house! And that's not all.

One evening, the narrator is sitting in his chair and finds everything about him has become an insubstantial mist, and begins the first of several bodiless travels through the space/time continuum. It's the kind of thing would put the climax of 2001 to shame; eventually he's zipping along the cosmos, watching the Sun die, the earth freeze, stars born, collapse, and reborn. At one point he sees his own lifeless body still sitting in a chair and all covered in dust, sees his own home on a vast Plain in some other reality, crawling with creatures as in his own reality. Cosmic horror, complete with its incomprehensible deities and endless vistas, begins here.

Far to my right, away up among inaccessible peaks, loomed the enormous bulk of the great Ass-god. Higher, I saw the hideous form of the dread goddess, rising up through the red gloom, thousands of fathoms above me. To the left, I made out the monstrous Eyeless-Thing, grey and inscrutable. Further off, reclining on its lofty ledge, the livid ghoul-Shape showed--a splash of sinister colour, among the dark mountains. 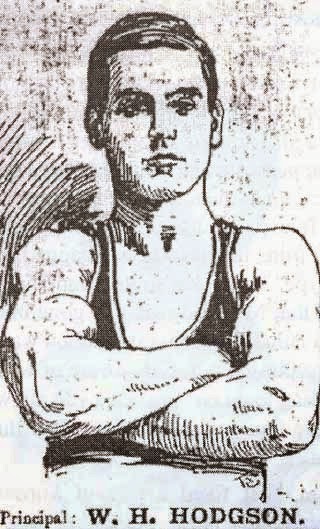 The ending itself you've read a million times before, but in the early 20th century I doubt it had been done much before then. Lovecraft popularized it but it quickly became a hokey cliché and I think you'll agree. And after the whirlwind of interstellar visions I think you'll find the climax a bit underwhelming. But. If you reorient your imagination by jettisoning from your memory the fiction it inspired, then House works like nothing before it. Even Hodgson's old-fashioned and comma-riddled prose can't impede on the power of some of the more hypnotic, disorienting passages. 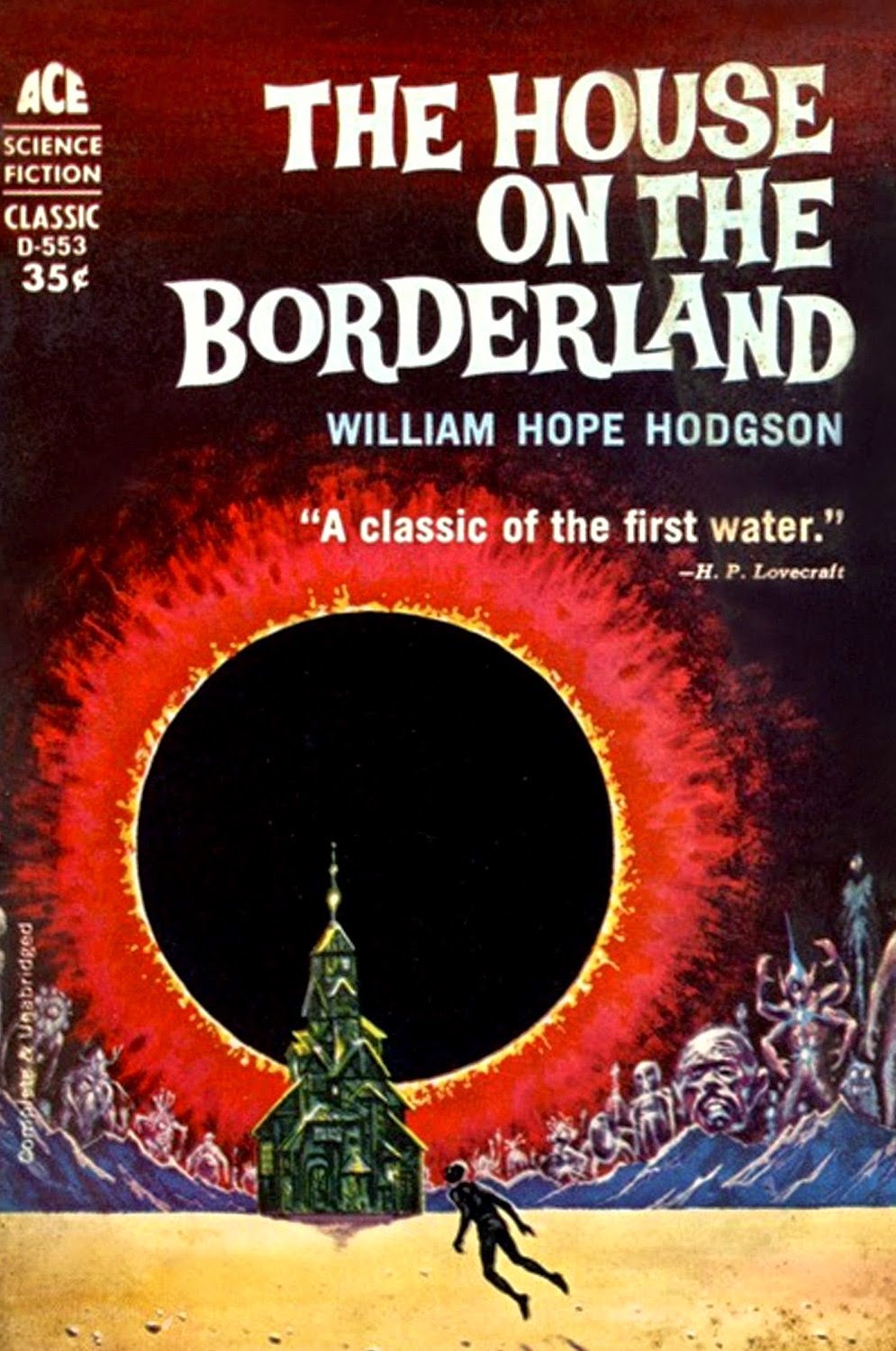 House is almost two books in one, and my reaction to it was in places mixed. I enjoyed the adventure/horror of the narrator's battle with the Swine-people in the first part of the narrative but later found the seemingly endless pages of space-travel tedious. There seemed to be no anchor to the flights of fancy; just more and more riffing on the bizarre nature of traveling through the space-time flux, colored globes floating about, the sun speeding across the sky and changing colors, the world spinning faster and faster into the void--much like Lovecraft's fantasy tales, which were never my favorite of his. But Lovecraft shares with Hodgson a fascination, an obsession really, with the unexplored deeps beneath homes, beneath the earth, of places where other realities can slip through into ours, of an indifferent malevolence threaded through the very warp and woof of our universe. 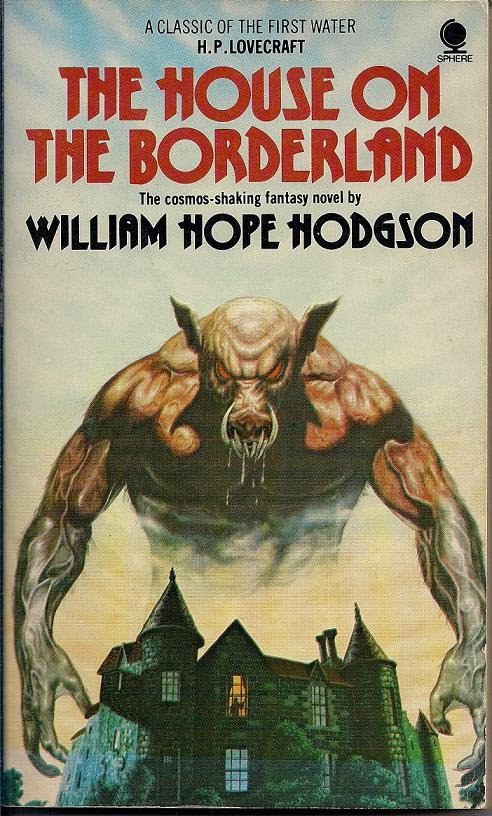 Lots of good paperback editions have been released over the years, as you can see. My copy is the red one at top, Carroll & Graf, 1983 with cover by Richard Courtney; it and this one from Sphere, 1980 with cover by Terry Oakes, play down the cosmic angle in favor of the hulking, drooling, terrifying swine-people--and you'll note how prominently Lovecraft's name is featured on most covers (the quote is from his famed and essential Supernatural Horror in Literature). 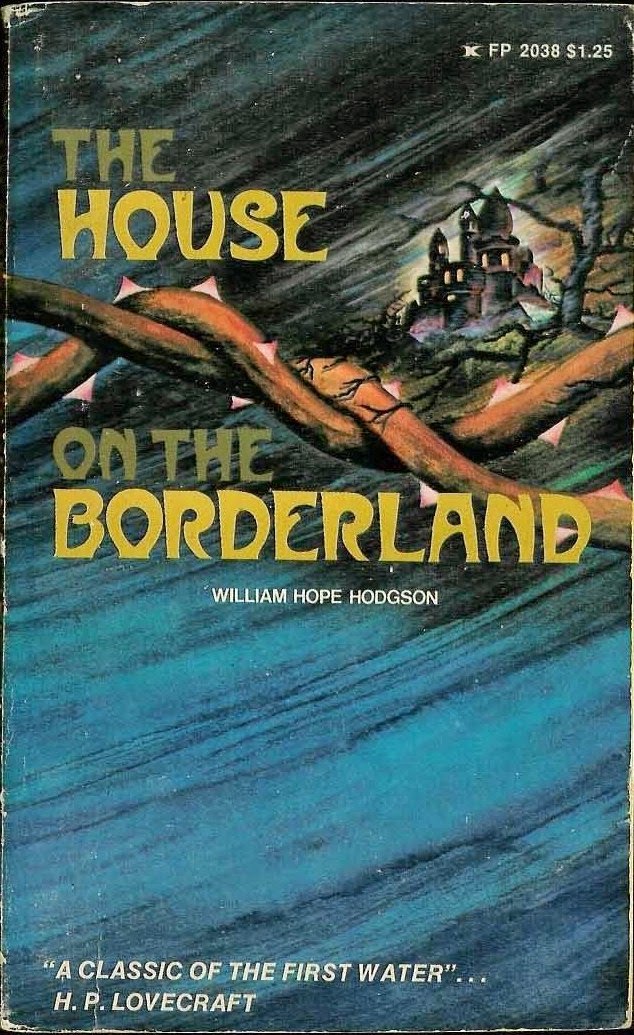 The midnight-blues of this edition from Freeway Press, 1974 evoke the emptiness of outer space and the utter solitude the narrator feels when he's hurtling through it. 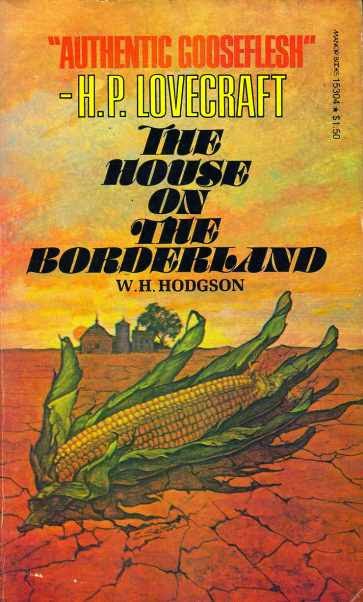 Manor Books, 1977. I'm struggling to recall if an ear of corn played any role in the story; that looks like a farmhouse on drought-struck land; pretty sure this cover was meant for a different novel entirely; E. Salter is the artist. 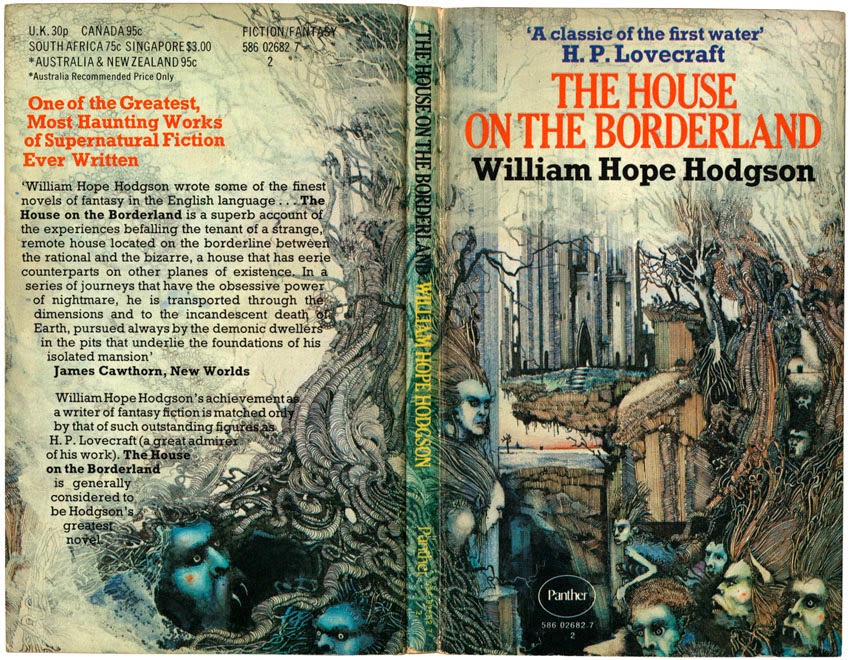 So in whichever edition you may read House on the Borderland, it'll be easy to see how it achieved its hallowed place in the pantheon of classic horror fiction. It's not always scary but it is always weird. He wrote other highly-regarded fantasy novels, like The Night-Land (1912) and The Boats of the "Glen Carrig" (1907) but it's upon this House which Hodgson's reputation is built.

WTF is with that corn cob cover?! On the other hand, the Freeway Press one is superb.

I just got turned on to the aquatic and cosmic terrors of W.H. Hodgeson earlier this year; beginning with The House on the Borderland. I adore his work - particularly the Carnacki stories and The Boats of the Glen Carrig.

Love the H. Bok cover for Arkham. Ole W.H. Hodgeson looks like quite the handsome stud in that drawing btw! Who would've thunk it?!

I truly enjoyed this review of HOUSE ON THE BORDERLAND but I must point out that Hodgson had a limited influence on Lovecraft. We know that HPL did not read Hodgson or this novel until 1934 by which point Lovecraft had written virtually all of his major fiction. The only stories written after his discovery of Hodgson were "The Shadow Out of Time" and "The Haunter in the Dark". So any similarities in any other story by HPL is purely coincidence.
http://williamhopehodgson.wordpress.com/

Well, that's what I get for not doing my due diligence! I could have sworn that Hodgson was an early influence on HPL--I know that's how I myself heard of him. And reading HOUSE seemed to corroborate my impression. Then again, it's been years since I've read either the Joshi or the de Camp bios of HPL, as well as Supernatural Horror. What an oversight! Thanks so much for commenting Sam. As for Hodgson and HPL similarities, it truly must be a case of great minds, etc.

What's also nice about the Carnacki stories is that not all of them turn out to deal with the supernatural. Also, Carnacki is refreshingly honest about those times when he felt fear or, in a couple of cases, ran away. It's a nice counterpoint to Blackwood's John Silence, who's pretty much infallible.

Thanks for the information about "House on the Borderland". I wasn't aware of this novel.

W.H. Hodgeson looks like quite the handsome stud in that drawing btw! Who would've thunk it?!

He was a seaman, and had to take up boxing and weight training to avoid unwanted shipboard romance. Either that or have runes from the Sigsand M.S. tattooed on his buttocks.