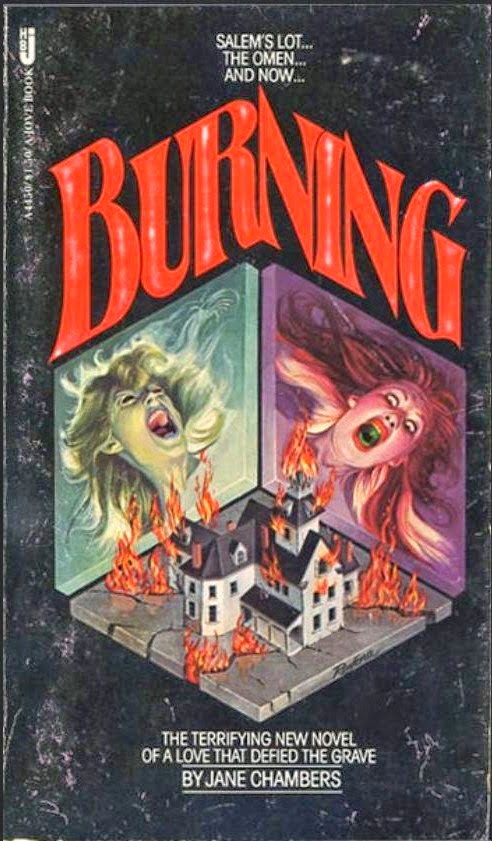 It's as if no paperback horror novel of the '70s was complete without a blurb that referenced The Omen, The Exorcist, Rosemary's Baby, The Other, or 'Salem's Lot. But why shouldn't publishers try to market their books to an audience that was growing unexpectedly large? Anything that got the book into readers' hands even for a few moments was necessary; anything to get them to part with a cool buck-fifty was legit. Same for cover art: my God do I love this Rowena Morrill illustration - that is some intense shit. And while Burning (Jove Books, May 1978), playwright Jane Chambers's first novel, isn't a classic like those other '70s heavyweights, it is something entirely its own: a lesbian love story told by fusing two time periods into one.

A sweltering '70s summer in New York City is beginning, and the Martins have little interest in being around for it. But can they afford a vacation? David is a talent agent who, thanks to his wife's urging, has newly gone into business for himself; Cynthia is a harried mother of two who once had grand dreams of filling canvasses with daring visions but soon after moving to NYC met her now-husband. They seem to be a quite typical couple of the day: not a dream team but one that works hard to overcome difficulties. They get a break when one of David's clients offers to "pay" David with the offer of staying at his family's summer house in the Massachusetts countryside. Along with Angela, the 19-year-old student David hired part-time and now helps Cynthia with Martin kids Peter and Janet, Cynthia loads everyone into a Buick station wagon and makes the drive north, with David to join in several days (I kept seeing Katharine Ross and her family in the early parts of The Stepford Wives here, which was cool). 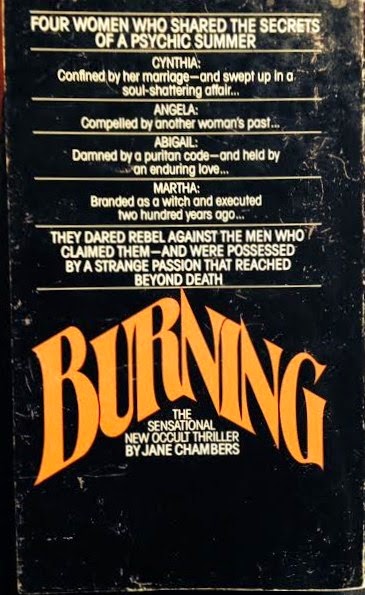 Everyone is delighted by the farmhouse and its attendant lake and woods, but one thing captures Cynthia's attention more than anything else: a small, unpainted room just off the kitchen, older than the home it's attached to, with hearth, dim windows, and roughly-hewn bedframe and chair. The room reached out to her, impatient, as though it had been waiting for her... She stepped inside and felt no fear. She was at home. Images come to her, of the room as it was, of trees being felled to build it, of planks being pounded together. Cynthia cleans it thoroughly, happy that David cannot disturb her enjoyment of it, wryly noting, A D&C... she'd scraped the womb and it was fresh to start again, building protective layers of lust and love and birth. This room will become integral to the story, the reader will have no doubt.

But Cynthia is also concerned that Angela has a crush on her. Angela herself thinks she does but won't say anything - what would be the point? Unspoken love was safest. There is a bit of tension and distrust at first, but that ebbs away as the women focus on the immediate pleasures and tribulations of caring for two rambunctious children during vacation. Thrown into the mix is Red Richmond, the 20-something neighbor, all masculine muscles and ginger beard, who begins a mild flirtation with Angela. Red fills in some history on the house and the room - built in the 1700s, older than the house itself, a crazy migrant must've built it - but his mannish manner puts Cynthia off: She knew a woman had lived in the old room. 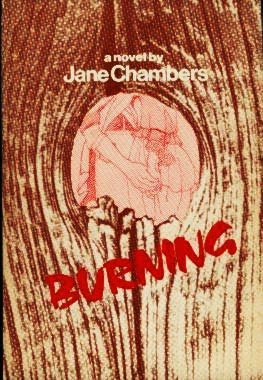 The first discordant note is really heard one afternoon when Cynthia skinny dips  after the satisfaction of cleaning out that room. Naked, sunloved, fulfilled; then she heard the cry.Without dressing, Cynthia runs towards the commotion and finds Pete in the rushing creek grasping a boulder, Angela and Janet helpless to save him. Unclothed, Cynthia rescues Pete herself. And now it gets weird. You trusted me with your greatest possession and I failed you, distraught Angela tells Cynthia. The conversation the two women have now is suddenly italicized, formal, archaic even, encoded with a knowledge and intimacy and a spiritual aspect neither woman can fathom. The words are not theirs, but the emotion, the longing, the fear is.


I'll never give you reason to lose faith in me again. That is a covenant between us, Angela said. Trust me. We need compatriots. You and I are destined to fight this world together... Angela laughed. The sin of nakedness. I shall never understand God.

Now a new story is teased out of these italicized thoughts and exchanges, and a history emerges the reveals once in this very spot, in that very room attached to the house, two unlikely women forged an unbreakable bond. Three hundred years have passed, but their passion, their honest yet forbidden love, has wended its way through the ages and finds a kind of release through these two women of the 1970s (note that tagline, A love that defied the grave!). Cynthia and Angela experience near fugue states in which they are - possessed? - by Martha and Abigail, two outcasts who found comfort in one another's arms and caresses... in a time when that could very likely lead to death. There are others involved: Red Richmond has strange reveries of a Squire Richmond, a poetic gentleman who attempts to court Abigail, against his father's wishes. In an agonizing moment, Squire Richmond visits Abigail to propose but finds her and Martha in flagrante delicto:


Squire Richmond did not understand what he had seen; he tried to liken it to the time when he'd caught farm girls bathing naked in the bay, although that was against the rules of every village, and, they said, displeasing to the sight of God.

When they tell him they are married, he is aghast. How is that even possible? And these events are being replayed, relived, in the present, nearly beyond the comprehension of the participants. This is a haunting, a possession, of love, terror, guilt, tumultuous emotions that offer great freedom but also exact a terrific price once the Squire informs his father, a respected town elder, of what he has seen in the two women doing in the dark forest. The devil takes a woman's body to perpetuate his work. The devil is possessed to seize a virgin for his mistress. 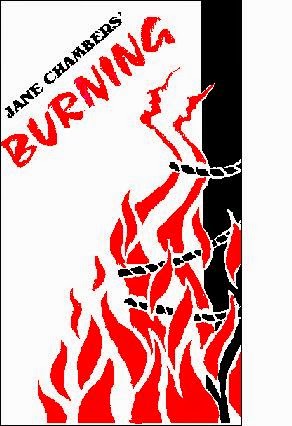 Now the novel's title becomes agonizingly real. The (literal) witch hunt that ensues is well done by Chambers; she gets across the paranoia of the village, all of which seem ridiculous today but then was a soul-freezing fear. Events reach a hysterical, gut-wrenching pitch - both in the past and in the present (there's a perceptive, angering bit making bigoted male cops akin to the elders of the past). But by story's end, a strange peace has been achieved, a kind of evening out of past "sins" and an acceptance of love's cost. As Cynthia notes, "When love is good, it doesn't matter who the lovers are." It's a hard-won knowledge, a sad, bitter wisdom neither woman would have apprehended without Martha and Abigail.

What really makes Burning work is the quality time Chambers spends with her characters, winding their thoughts through the present-day story: passages about David and Cynthia's oft-fraught marriage and the give-and-take of men and women (Their marriage was ingrown, they fed on one another's weaknesses... bloated with a sense of security, knowing each one depended on the other for survival); of Angela's overprotective, vulgar, drunk widowed father and her ambivalence about the opposite sex (Men puzzled her just as her father puzzled her. They frightened her, just as her father did... she discovered male knowledge was a clever sham); and Red's somewhat old-fashioned history with women (if he enjoyed a liaison, he wanted to romance the girl, protect her from the advances of other men) that doesn't quite jibe with the era, and now seeing young Angela... These are the details that real writers use, drawn from observation and experience of  the real world. 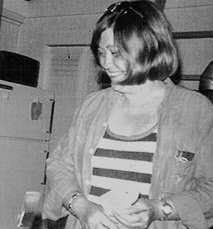 I was drawn to Burning solely for its lurid cover, but I stayed for the story and the writing. This knowing, quiet, yet emotionally-charged story of a lesbian affair exists in that uncomfortable realm of being not horrific enough for a horror audience and too horrific for a non-horror audience. The garish cover may have kept away an audience that might have found in its pages a sensitive, realistic portrayal of the secret relationships gay women were "forced" to have in intolerant, ignorant societies. The analogy of lesbians and witches as creatures of the night performing bizarre rituals that threaten male hegemony is a sadly apt one, and one Chambers infuses with a poignant, romantic, and heartfelt authenticity that rings true still these many, many years later.

Posted by Will Errickson at 9:40 AM

Wouldn't mind reading this one. Thanks for the update.

Those re-print covers have got nothing on the original!

I’m pretty sure I read this in middle school in the ‘80s and it’s stuck with me all these years. Found this page while trying to figure out if the book is still published and am now realizing that it had much more depth than I could have grasped at the age of 13. Thanks for writing this up!