The Totem by David Morrell (1979): Run from the Hills, Run for Your Lives

Chosen as an entry for Horror: 100 Best Books by none other than notorious gore-king Shaun Hutson, the nature thriller The Totem is the third novel from David Morrell, and his first in the horror genre. Morrell isn't a huge figure in modern horror fiction - although he wrote one of my favorite horror stories ever, "Orange is for Anguish, Blue for Insanity" - but he created one of the '80s hugest and most recognizable pop-culture fictional figures, one John Rambo, the protagonist of his 1971 debut title, First Blood. Although I've never read that, I know you can dig this first edition paperback of it: 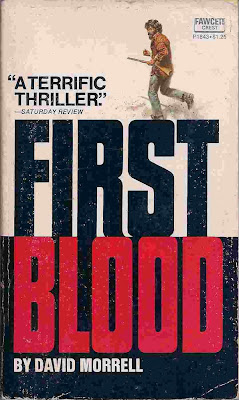 The Totem is another one of those books that was edited down greatly from its original manuscript form, then republished years later (in this case, 1995) with all edits restored. I read the 1985 Ballantine books paperback (seen below; at top is the first paperback, Fawcett Crest August 1980 with cover art by Richard Courtney, thanks to Secondhand Horror) so I don't know first hand what was "missing," and don't think the book needed much more than it had: it's a dour, no-nonsense, single-minded tale that grimly presents flawed and frightened men trying to forget past failures as they confront... well, somethings from the hilly wilds just above a small Wyoming town, something making mincemeat, and more, of innocent citizens. There is disease running through the veins of these somethings, a new kind of rabies - but it brings the same old kind of death.

Opening with a cinematic and suspenseful scene in a working-man's bar, The Totem wastes no time introducing us to Potter's Field, that small Wyoming town residing beneath a gorgeous mountain range. The usual cast of characters show up: the police chief, Slaughter, newish in town from back east; the old coroner, Markle, who'll be dispatched promptly; the younger medical examiner, Accum, who'll replace him, but who hides a hideous secret; Parsons, the wily, oily mayor/newspaper publisher; Dunlap, the alcoholic journalist returning to town after disgrace; and various other cops and love interest and town-folk and their children. Potter's Field comes complete with its own dark past: once in the early '70s a caravan of back-to-nature types, under the aegis of rich and eccentric Quiller, took to the unforgiving mountains to live in their own compound. But: They didn't know what every six-year-old around here knows instinctively. You try to take on nature. It'll kill you.

Morrell, in this version of the book, has made what might be a reduction of prose and character and motivation from his original manuscript that might take some getting used to; he has a habit of referring to people simply as "he" or "she" and even "it" when describing the monstrous and possibly inhuman creatures. His prose also has that weird mix of clarity and obscurity favored, I feel, by writers influenced by Hemingway. But none of this affects the power of scenes dealing with Dunlap's drinking, Slaughter's guilt about something that happened to him back in Detroit, or especially a terrifying and saddening scenario with a little boy beset by disease. The account of Accum's moment of weakness years before is deftly and quickly told, but leaves a real chill. Action scenes come thick and fast, but that's where Morrell's talents are (you can see that element highlighted in the '90s reprint below). 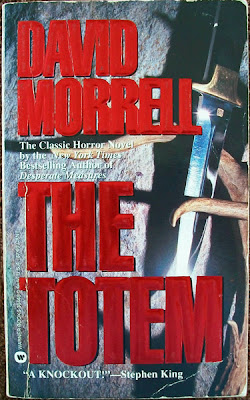 The Totem isn't truly original - time and again I was reminded of other books and movies (Rabid, Raw Meat, 'Salem's Lot, even Morrell's own First Blood). The climax is underwritten but believably chaotic and satisfyingly weird - evolutionary atavisms and ancient religious iconography figure in. It's a gripping read, mostly, even in this apparently "edited" version, and while I don't agree with Hutson that it is one of horror's 100 best novels, The Totem definitely deserves to be tracked down and read.
Posted by Will Errickson at 6:00 AM

Will - I read the '85 paperback upon it's release back then & enjoyed it. Enough, so that I decided to give the unedited version a shot when I came across that paperback for cheap in 2003. And, I enjoyed it again, even more so. That's the version I recommend. There's not a whole lot of differences, but just enough...
Morrell hasn't written too much pure genre material, but what he has is usually quite entertaining & effective. I think he does a better job of it than he does with the action stuff that he's better known for. Which, I've read my fair share of.
Peace.

Nice Iron Maiden reference. I have not read this one. I do remember, however, passing over it when I saw it. I'm not sure that was a mistake.

I like mostly zombie movies and zombie games especialy all cool zombie shoters in this website http://games25.com

I read it back in ther day -but can't remember if I even got through to the end... I do remember that I didn't like it much-didn't give me a chill at all, probably because I couldn't make sense of what was happening or what the "monsters" were even.
Ah well. Can't win em all I guess.

I read it as a teenager in school back in the mid 80s, and found the resolution pathetically weak (not to speak of one reference to "mammals" as "animals" in contast to reptiles when talking of the limbic system). Unless the uncensored version is much, much, *much* better, it will remain pathetically weak, as bad as Crichton's "The Andromeda Strain".