The October Country by Ray Bradbury (1955): The Season in My Veins 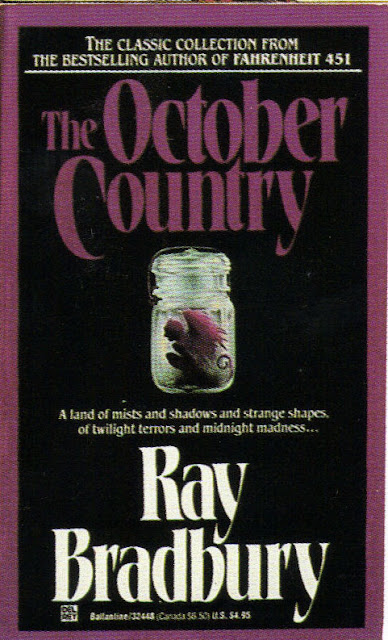 That country whose people are autumn people, thinking only autumn thoughts...

There's not much of an autumn here in the American South where I live. We get some chilly mornings and chilly nights, but they're more like winter cold, and at mid-afternoon the sun's glare can make you think it's mid-July and Halloween is a cruel lie. There's little of the crisp smoky coolness that signals the year's end, nothing in the weather here around October that makes me think back on past autumns... and isn't autumn the most nostalgic, the most contemplative of seasons? I believe it is. 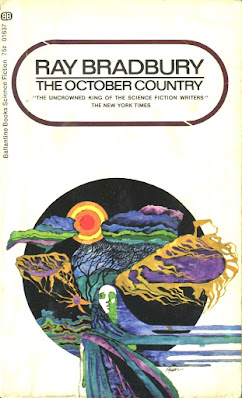 I miss autumn, a real autumn, so: to what could I turn to give myself a feeling of the season's changing? What could provide the scent of burning leaves, apple cider, pumpkin spice, the early darks and the bonewhite moons, the chilled air that nuzzles your neck, the growing thrill of the arrival of All Hallow's Eve and the macabre treats upon which to feast...? You guessed it: this collection of poisoned confections entitled The October Country, from the incomparable Ray Bradbury (although it's certainly not the first time I've turned to Ray this time of year). 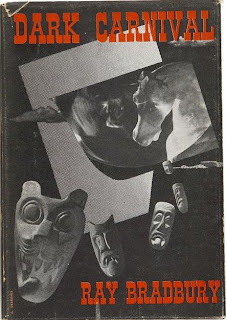 A quick history: in 1947, the esteemed Arkham House published Dark Carnival, Bradbury's debut book, consisting mainly of his stories written for the classic pulp magazine Weird Tales. In 1955 Ballantine Books reprinted the collection, subtracting some of the stories and adding a few others, under the title The October Country. So basically what you have here are Bradbury's earliest works. Does that mean that they're unformed, not quite ready for consumption, perhaps timid things unsure of their footing before Bradbury gained confidence and experience as a writer? Oh, not at all! These stories are amazing. Why, I kept saying to myself as I read, am I only reading this now? 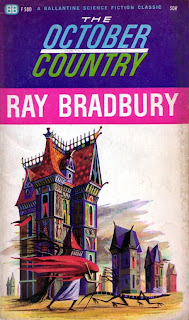 The longest story included, "The Next in Line" is one of the best I've read in ages; in it I could sense the seeds of Matheson, Beaumont, King, Campbell, Etchison, others who would come along in the future to join Bradbury in delighting readers with dread. A young couple vacationing in Mexico visit the mummies in the catacombs and learn how the poor bury their dead. Marie, the wife, is struck dumb and cold by the dried-husk bodies:


Jaws down, tongues out like jeering children, eyes pale brown-irised in upclenched sockets. Hairs, waxed and prickled by sunlight, each sharps as quills embedded on the lips, the cheeks, the eyelids, the brows. Little beards on chins and bosoms and loins. Flesh like drumheads and manuscripts and crisp bread dough. The women, huge ill-shaped tallow things, death-melted. The insane hair of them, like nests made and remade...

And much more like that throughout. Yep, Bradbury's unmistakeable style was there from the beginning. Many of you have probably come across "The Small Assassin" somewhere or other; it's been anthologized plenty. Its ingeniousness wins out over its central implausibility because it sounds true: What is there in the world more selfish than a baby? Guess there's one sure way to cure post-partum depression. Some stories have such plain titles the words themselves take on a simple malevolence: "The Jar" (obviously the basis for the cover art at the top). "The Lake." "The Emissary." "Skeleton." "The Crowd." "The Wind." As someone who finds blowing winds anxiety-inducing, I could really relate to that last one. There's a vaguely Lovecraftian or Algernon Blackwood feel: That's what the wind is. It's a lot of people dead. The wind killed them, took their minds to give itself intelligence. It took all their voices and made them into one voice... 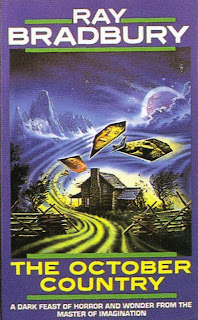 Death appears in myriad forms: on an endless field of wheat, at 92 degrees Fahrenheit on the thermometer, in the very bones in our bodies, down in the earth itself. "The Emissary" starts off innocently autumnal with a sick boy in bed who lives vicariously through his roaming pet dog; it finishes not so innocently at all. Bradbury perennials like sideshows and carnivals feature in "The Dwarf" and "The Jar," and his sense of boundless, mischievous joy buoys "The Watchful Poker Chip of H. Matisse" and "The Wonderful Death of Dudley Stone." There is sadness too: Timothy, the young boy in "Homecoming," yearns and yearns for a monstrous familial identity that will never be his, while "Uncle Einar" wishes he could be a normal father for his brood. 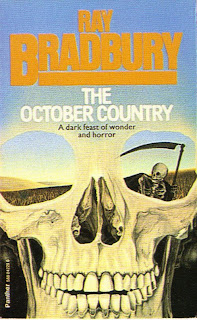 Poised between the sweet and the scary, I see The October Country as a beginner's book of horror; something to be given out like candy to eager children, to satisfy a sweet tooth, to prime burgeoning taste buds for a lifetime of fearsome entertainments. The marvelous Bradbury prose is appropriate for younger readers while offering us adults plenty to appreciate and exclaim over; poetic and playful, with rich veins of darkness powering through, as in "Touched with Fire"...


Some people are not only accident-prones, which means they want to punish themselves physically... but their subconscious puts them in dangerous situations... They're potential victims. It is marked on their faces, hidden like - like tattoos... these people, these death-prones, touch all the wrong nerves in passing strangers; they brush the murder in all our breasts. 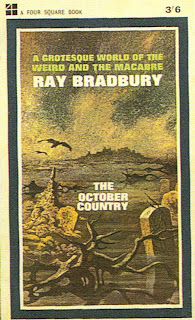 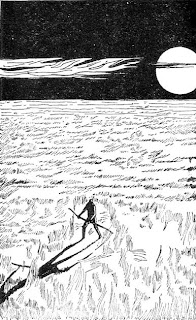 (And I haven't even mentioned the stark black-and-white illustrations by Joseph Mugnaini; be sure to go here to see them all. *shiver*.)

It's no surprise to state, finally, that The October Country is a horror classic for all ages for all the ages, one that I wish I had read years ago; it is a must-read, a must-have, preferably in one of these musty old paperback editions, creased and worn from years of seasonal readings, of visits again and again to a country where noons go quickly, dusks and twilights linger, and midnights stay. 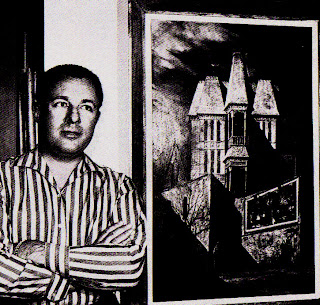 Thinking only autumn thoughts.
Posted by Will Errickson at 6:17 AM

Oh, Bradbury's THE OCTOBER COUNTRY. The single finest one-author short story collection I have ever read. It's stunning how good it is.

My favorite cover art for it are the Mungnaini efforts. I think there were two or three of those on different editions. He was shockingly perceptive of the collection.

I've never read the original book--DARK CARNIVAL. I passed on copies at reasonable prices back in the day when I collected old books. I wish now I'd bought one. Not because it would be more valuable now, but because I don't want to shell out the kind of money they ask for them these days.

It really is an amazing collection all the way through; the stories are uniformly good. I see a 1st edition of DARK CARNIVAL from Arkham is going for thousands and thousands of dollars!

The October Country changed my life! I see it as sort of a "gateway drug" to MY world of horror reading. The main reason being I read it at an impressionable age, about 12 or 13 if I remember correctly. Along with his other book Dandelion Wine, I felt as if I'd discovered some dark secret that this author KNEW me and was speaking to me and my childhood personally.
My favorite stories are The Lake, The Small Assassin, The Jar, The Next in Line, and The Emissary.
At about the same time in 7th grade i discovered Shirley Jackson's stories in The Lottery, and well...the rest is history! I was a "goner!"

What is it about Halloween and Ray Bradbury? The two seem to be made for each other.

Oh, I think it's the sense of nostalgia for one's childhood, the turning of the seasons so dramatically, the long and early nights, the ghosts and the spooks, and probably the candy.

Will, a much belated thanks for bringing my attention to this...I'm a short story enthusiast and didn't know such a handy collection of Bradbury's classic work existed

This was a wonderful accompaniment to my trip to Korea back in November shortly after you posted it, culminating in a semi-hallucinatory session on the plane ride home dozing and waking back up in disbelief to the nightmare of "The Man Upstairs"...

I don't read a lot of fiction that dates back this far, so I guess I'm struck (as I was recently by the stories in "The Lottery") by its loudness, maybe? I can imagine a lot of this stuff, even today (especially today, even), being banned from school libraries without a second thought.

As far as pure otherworldliness, I think the best here have to be, again, "The Man Upstairs," and "Jack in the Box." So unrelentingly twisted. I will admit to finding "The Small Assassin" pretty hokey, as I do Bradbury's claim that he remembers every moment from the time of birth. I can imagine he doesn't care much what I think, though...

Not sure what edition I got from the university library where I work, but it had a newish (early 2000s?) introduction from RB, and the jacketless book was a very pleasing and appropriate bright orange, probably better than any cover art could have been.

So for this and Shirley Jackson, eternal gratitude!

I want to revisit this post today of all days... excluding Oct. 13 of course!

This is a wonderful analysis of, and tribute to, a great author's greatest book.

There's been a project stuck in development hell since 2008, "Wilderness of the Mind: The Art of Joseph Mugnaini" that was looking to be a comprehensive art book of his work, with a forward by Bradbury. I'm still waiting over a decade later for this thing to materialize. The sample layouts looked amazing, but where is it?