The Horror Paperbacks of Fritzen Ravenswood 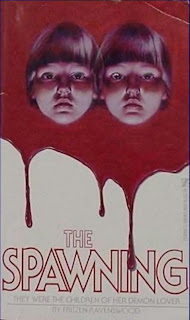 Who the hell is Fritzen Ravenswood, and why did this writer produce only two Zebra paperbacks? I don't think anyone knows. First, "Fritzen Ravenswood" is, obviously, a pen name* (update: actually, it's not; see comments below), but what a pen name (why, it's more impressive than Garth Marenghi). At least, I think it's a pen name; don't you? I suppose it's entirely possible the author's parents foresaw their child's future as a pulp horror author, and wanted to provide the kid with an appropriately morbid moniker. The titles of the only two works attributed to Ravenswood, The Spawning and The Witching, both published in 1981, feature the gerund form that was inescapable in cheap horror novels post The Shining. 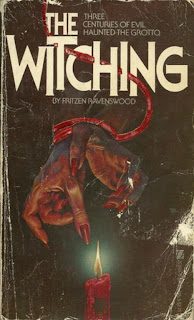 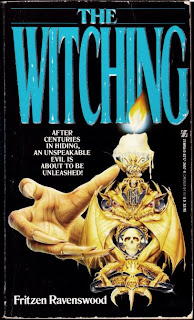 At the top you can see the typical horror-fiction creepy twins - looking like the Holland brothers from The Other - bathed in blood with the tagline They were the children of her demon lover. Coool. For The Witching, there are exquisitely detailed hands bound together... Obviously these two novels were published before Zebra's famously ridiculous skeletons began cavorting about the covers in all manner of scenarios. Like this one: 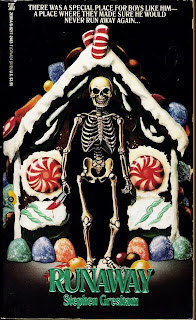 Although I don't think the skeleton here is cavorting as much as he is frozen in utter embarrassment...
Posted by Will Errickson at 6:50 AM

What a great surprise to glance at my screen and see the name Fritzen Ravenswood! I must admit that The Witching is one of my favorite cheesy horror novels of the 80's. The story isn't (quite) as far-fetched as some, and the writing is surprisingly good. I've never heard of The Spawning, but I must have read The Witching twenty times. How cool to see it here!

Yes, surprisingly good, subdued covers for Zebra paperbacks, especially that nicely sinister second one with the candlelit hands. I'd consider buying a copy of that one for the striking cover alone, without needing to know anything else about the book.

The Spawning? Probably not; I don't really need to read another OTHER/SHINING rehash about malevolent/psychically-gifted child/twins. Unless, perhaps, as the cover suggests, this particular malevolent child reproduces by cell division.

Well, I've got that first printing of THE WITCHING with the red binding on the wrists & I can VERY vaguely recall reading it three decades ago, but you could put a gun to my head & I wouldn't be able to tell you a single thing about it without digging it out of the bottom of my bookshelf & reading the back cover. And even then, that's ALL you get. Because that novel is now a total blank to me.
I'm happy for Karen that she got so much enjoyment out of it, but it left no impression on me whatsoever.
I'm loath to be so negative about a book that I've basically forgotten EVERYTHING about, but actually, that speaks volumes to me about it. Because, under normal circumstances, even thirty plus years on after reading them, I can tell you about books that I read back then & critique them a bit. But, with THE WITCHING being such a virtual black hole in my mind, it tells me that I must have found it deadly dull & struggled to finish it.
As for THE SPAWNING, I very much remember that cover as one that I've seen with much regularity in used book shops over the years. And, I never bought a copy nor was even tempted to. Which again, tells me that I was MORE than a wee bit unimpressed with "Ravenswood's" work on his other book.

LOL ! I have those books. Btw...What happened to Stephen Gresham ?

Love those covers. Never heard of the author or the pen name, but I'll have to add the names to the list for the next time I'm skulking a used-bookshop.

Haha! I was good friends with Fritzen Ravenswood. In fact, when I was in grad school I proofread __The Spawning__ before she sent it to the publisher. Evidently the publisher of these cheap horror novels didn't provide proofreading, so any typos that you find are my fault! On the other hand, Fritzen wasn't making a whole lot of money at that time and my only pay was a dinner in a nice Chinese place so you get what you pay for I guess. And yet I was thrilled to do it for her since I got to have dinner with her.

In answer to your question about who she was, she was a grande old dame who was born in the late twenties. She was friends with my mother in college and told her wild stories of being held captive in South America by a man she had married and then later escaped from. Come to think of it, that would have been a great horror novel too.

She was irreverent and mouthy, but yet she had a different side to her too. She was a Christian Scientist and could be extremely sweet and motherly. I still have a few letters that Fritzen wrote to me when I was pregnant with my second child.

I met her when I befriended her twin sons in the 10th grade in 1968. (Yes, their names are the same as the ones in the book.) I actually dated one of them briefly and we are lifelong friends. One of the twins was, yes, a Wiccan priest and she was terribly proud of that fact. I attended the wedding ceremony of the other twin, at which the witch twin officiated in Fritzen's backyard.

Fritzen Ravenswood is not a pen name really. Her real name is Fritzen, but when she was divorced from the twin's father, she took the name "Ravenswood." She told me she took it because it was the name of a pagan coven. I kind of wonder if she didn't foresee the name on the covers of these horror novels.

I remember a conversation she had once with the Wiccan twin. He said, "I can't figure out how these things come out of her mind!" We all laughed.

The Wiccan twin died in the 1980's. Fritzen died about five years ago and the only one left in that family is the twin who is my lifelong friend. I love all of these people dearly and I'm thrilled that you are writing about them. I am glad that __The Witching__ and __The Spawning__ are still being read today and I know that Fritzen is in the glorious afterlife, smiling, happy to be written about in your blog.
professor_mom from Facebook

professor_mom, that truly is an *amazing* tale! Thanks for sharing it with us.

I read The Witching when I was about 13 and I loved it. I remember so clearly a passage where a female noted her astonishment that the protagonist tossed the salad with his hands. Every time I toss a salad without tools I think of Fritzen Ravenswood!

professor_mom from Facebook could you get in touch with me. I'm currently researching Fritzen and the twins and would appreciate getting more information from you.

Guy Frost--This post and its comments are the sum total I know of Ravenswood. Sorry I don't think I can be of any help!

Thank you Will. I have learned a lot about Fritzen since I made that original post. Fritzen is a nickname she took sometime in College (IU) and Ravenswood is the name of her son's (Dirk Dykstra) coven, which she took after her divorce. The name of the Coven (according to one Coven member) was not called Ravenswood, so that may be disputed. Regardless, Dirk also published under a pin name: Leo Ravenswood, or Dirk of Ravenswood, amongst other names. Fritzen did finish a third novel that was never published.