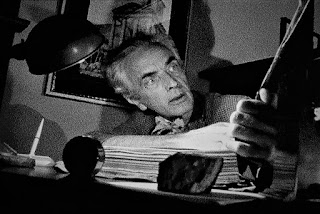 Wow, the 20th post in my quest to help horror fans find forgotten books and stories! These descriptions have me stumped, so can anyone help ID these works? Thanks in advance y'all!

1. Paperback, cover mostly black, front cover illustration of an evil or feral-looking naked woman lying on grass, glaring angrily up at the us, the viewer. She was on her side in a semi-foetal position, so no NSFW frontal nudity is visible, her head is totally bald, her skin seemed to be overly veiny or tautly muscled (to emphasize she isn’t meant to be attractive or alluring) and she may have been clutching a kind of laurel wreath to herself. The synopsis described a little boy discovered alone with his entire town/village community vanished, and when questioned about it he can only furiously draw a naked bald woman on the ground, like the one on the cover. I can’t remember if he is the main character grown up, or the main character. Found! It's the UK edition of John Farris's Fiends: 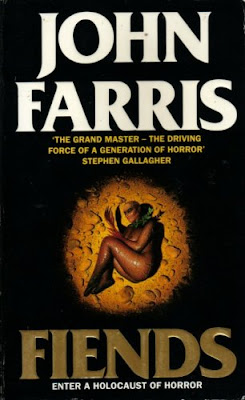 2. My aunts left a paperback around in the early '80s, might be a late '70s publication. Simian hybrids reminiscent of Lovecraft's Arthur Jermyn live in tunnels below a town. They're extremely sexually voracious and the author lavishes detail on how their massive and agile genitalia turn women into blissed-out hostages. (There's a mutation where the tip of the urethra can extend as a kind of "mouth," with its own tongue if I recall correctly.) There's an assault on the tunnel system that fails, leaving the women happily pregnant. I'm sure there's a lot more context but it was a lot to process. Found! It's one of Laymon's Beast House novels: 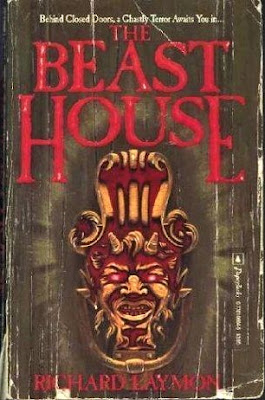 3. Late ’70s or early ’80s: the cover was purple and had the embossed, in black, wide-stretched jaws of a big cat, all fangs and stuff, alluringly emblazoned upon it.  Or maybe it was the open maw of a panther of some sort.  I could have sworn the book was about an ancient evil/demon being released and its grisly killing spree in a museum of some sort.

4. An orphan who goes to live with some wealthy relatives, an uncle (I believe) who seems nice but is actually super creepy. There's also either a young girl who might be another relative or maybe household servants who is not mentally stable and has been raped by someone (there was a real ick factor in this one that really didn't compare with other gothic books I've read). I feel like puppets or dolls might have been involved - like the uncle collected them or made them as a hobby or something).  I know the writer was responsible for at least several more gothics. I also know they weren't one of the super famous/more talented writers. No Victoria Holt (under any name), Daphne Du Maurier, or Mary Stewart here. It was also definitely not Phyllis Whitney, Dorothy Eden, or Dorothy Daniels as I've read and own many books by them and would have remembered that.

5. A werewolf tale. A homeless man, or a hobo, or some kind of derelict, unfortunate soul, cursed with lycanthropy. He lived in the basement of an abandoned building of some sort, maybe a house, or a factory. The story might have been told through his journal entries, but I'm not sure. What I remember most vividly though, was that he had a radio that he would turn on occasionally, as a sort of reward to himself. He didn't want to use up all the batteries. The story might have taken place in the 50's. Found! It is a short story by Kathe Koja, "Angel's Moon," published in 1991's Ultimate Werewolf antho. 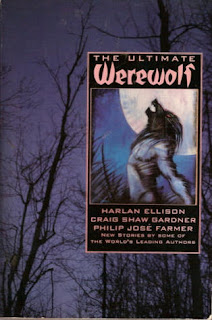 6. A magazine in the 1970s (one of those with lots of sci-fi and horror tales) and featured a monster that lived in a junk yard named Otto. That's about all I can remember about it. I was wondering if you might know the story name and author. Found! It's "The Dump" by Joe Lansdale, published in a 1981 issue of "Twilight Zone" mag. 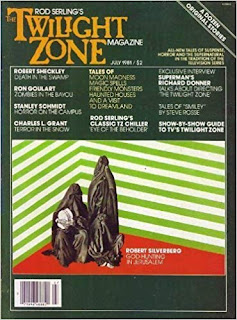 #6 is "The Dump" by Joe R. Lansdale, from the July, 1981 issue of Rod Serling's The Twilight Zone Magazine.

#2 sounds like The Cellar -- or one of its sequels -- By Richard Laymon.

I also think the second one is likely Laymon's the Cellar, or Beast House, Friday Night in the Beast House, or Midnight Tour. Been a while since I read 'em, though, so I can't say for sure, but I'd be surprised if one of those wasn't it.

#4 sounds like the kind of plot Ruby Jean Jensen used to use a lot. (Those go for CRAZY money used, by the way - anybody who reprints 'em will probably make a fortune).

The museum setting in #3 makes me think of The Relic by Douglas Preston and Lincoln Child, although it's probably too new and I don't remember any such cover (but it could be a British variant or something).

Maybe number 3 is Panther! by Alan Ryan (1981), already reviewed on this blog. And by the way, that number 2 has some crazy shenanigans, I'm gonna check this thing out.

The first one sounds like it could be Fiends, by John Farris. He takes an Icelandic legend of the Hulder Folk and puts his own twist on them; they can spread their condition, are completely hairless, make their own butterfly wings to fly, and have gypsy moths as minions.

I'm fairly certain #5 is a short story by Kathe Koja called "Angels' Moon". I found it in a werewolf collection edited by Byron Preiss from 1991 called "The Ultimate Werewolf". Not bad, from what I remember, it also had "Adrift, Just Off the Islets of Langerhans" by Harlan Ellison and "There's a Wolf in My Time Machine" by Larry Niven.

Jesse B. is correct, #5 is "Angels' Moon" by Kathe Koja, from The Ultimate Werewolf, ed. Byron Preiss (1991). Pulled my copy off the shelf and read the story.

FYI The Dump was adapted into a first season episode on the Netflix scifi anthology series Love, Death & Robots.

I was thinking #3 could be either "Panther" by Alan Ryan, as mentioned above, or "The Cats" by Nick Sharman.