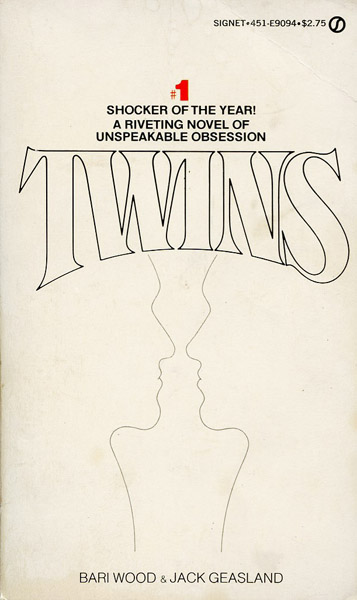 In the old country, they say twins are cursed...
not one person, yet less than two...  that's what they say.
But we believe in escaping curses, don't we?...
Two such fine boys...  you want them to grow up to be individuals;
husbands, fathers, menschen...
separate them now, as much as possible
—or they won't grow up...
Several years before her wonderful novel The Tribe, Bari Wood wrote a different book about a small band of outsiders who form an insiders' bond for the sake of survival in an uncomprehending world. With medical writer Jack Geasland, she gave us Twins (Signet, May 1978), a deft and sure-handed shocker that became the basis for David Cronenberg's 1988 masterpiece Dead Ringers. Forget what you know about that movie, because Cronenberg used only the very basic concept: two men, twin gynecologists and their symbiotic relationship and gradual self-destruction (based, again loosely, on a true story). Twins the novel is horror-adjacent thriller, a penetrating portrait of these two (?) men which will appeal to anyone who appreciates a deep dive into the genetic swamp and its attendant creep factor. 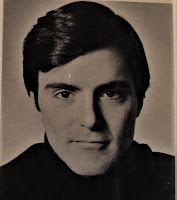 What makes Twins such a gripping read is the authors' expert plumbing of the labyrinthine psychological, emotional, and sexual underpinnings of the Ross brothers, David and Michael. Born in New York City in what is probably the late 1940s, the twins experience a blooming adolescence with the usual signposts of Jewish youth of the era: summer camp in the Catskills, tentative discussions with sympathetic dad about college and career, fumbling sexual encounters with promiscuous girls ("You're just little babies, ain't you?"), and being weirded out by old Jewish men who make frightening prophetic pronouncements to young boys, as in the quote at top. There's also the little matter of David and Michael being entirely too close: "When David guided Michael's hand inside his pajamas, Michael stroked David the way he wanted him to." 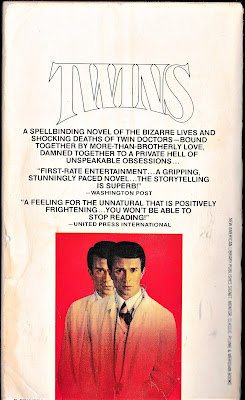 Anyone who reads 1970s and '80s horror/thriller paperbacks is aware of their unsettling prevalence of incest, and in Twins we have the dreaded twincest. Generally I grit my teeth and plow through this kind of thing, but in Twins, the Rosses are so emotionally and psychologically twined together that their physical intimacy is a foregone conclusion: the scene I just quoted from is on pages 30-31, and it's hinted at on the back cover above: more-than-brotherly love. 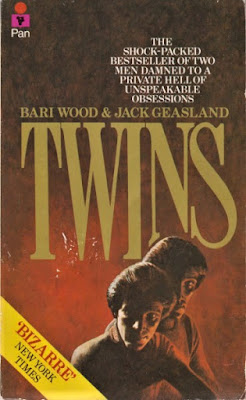 The authors use subtle clues to the similar-yet-different natures of Michael and David, yet it is still apparent that David is the dominant brother and Michael the more sensitive—yet it is Michael who wants to live a life free of his lineage. It is Michael to whom that old man speaks; it is David who never thought their identities "were a curse"; and it is David who sabotages Michael's attempts at attending a different medical school while Michael is ill. While in their early 20s, their relationships with women are, to put it mildly, rather sleazy, and the two very good-looking brothers develop an unsavory reputation for fucking... Everybody and anybody.

When Kathy Field, the girlfriend of a medical colleague, piques Michael's interest, David is wary: "Still thinking about the shiksa? Anders' girlfriend could mean trouble for us, Michael..." But Kathy is fascinated by the twins, how could men look like that? and when Michael asks her out despite her boyfriend and despite David, she is delighted. Thus begins a romantic relationship between Kathy and Michael, and David can't stand the thought of his brother being alone with a woman (neither has ever been alone with a woman—that's their kink, being with women together or as couples). What's David do? Starts a homosexual relationship (David was impressed with the neatness of the experience) with another doctor, Romer, who wants David to go to Boston with him and open a practice. You can't stay with your brother your whole life, Romer tells him... 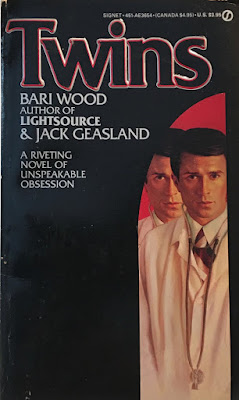 All this I've described is simply the beginning. There is a lot to unpack in Twins, which is what I really enjoyed about the book—the twisting betrayals, the complex interplay of David's possessive instinct, Michael's growing anxiety and his use and abuse of drugs and alcohol. The sexual aspect isn't erotic but it is a very strong undercurrent in the lives of everyone involved. Twins is an adult novel, which I found refreshing: there are hospital politics, medical discoveries, an awareness of class and sophistication and religion in the characters' lives, in how they speak and interact and navigate the wealthy New York and Boston worlds. We are shown that these are ambitious, intelligent, emotional people.

At one point, Michael becomes obsessed with the quietness of the cancer ward, and even begins an affair with one of the dying women. It is heartbreaking. Wood and Geasland get inside these complicated people in that smooth mainstream manner that is a balm to my often pulp-horror-addled brain. At one point David and Romer are staying at a Cape Ann beach home, and David muses at what a perfect gentile vacation spot it is, and recalls his father's words about how "gentiles are a different breed, the goyim never enjoy themselves unless they're uncomfortable... It'll be the same way with women, with your patients..." 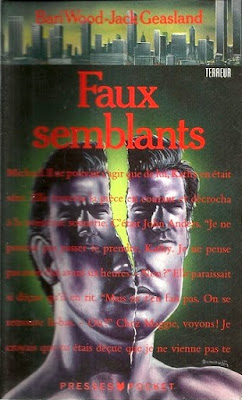 So then Twins is not exactly a horror novel, but there is suspense and dread, for we know what is going to happen to these men. Kathy leaves Michael, who spirals into drug abuse, and it's hinted that David is orchestrating his brother's downfall. These men were doomed from the womb, a tragedy neither could have avoided but one tried and failed. Wood and Geasland have written a satisfying psychological thriller that I recommend to those who enjoyed The Tribe, the Cronenberg film adaptation, and also to fans of the chilly 1981 Andrew Neiderman novel Pin. If you can get past the utter squickiness of David and Michael's relationship, as I did because of the exceptional skill the authors used in telling their twisted story, you'll find Twins, in the parlance of the day, unputdownable. 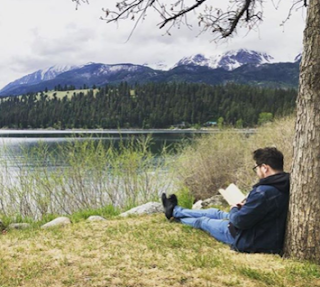 Me reading Twins at Wallowa Lake

Posted by Will Errickson at 2:06 PM

Pretty weird that Geasland looks a hell of a lot like the twins on the book cover...

I have had the pleasure to read this book as well. It is very well written and stays with you years after you have read it. I first picked it up off my mother's bookshelf when I was 14 and reread it again in my 20s. At 14 I did not grasp most of the novel but it wrecked havoc on me in many ways as well as making me feel an deep sadness for the characters. As a semi adult in my 20s I was more aware of the psychology in the book (for lack of a better word) and it didn't lose any of its luster as I went on a rollercoaster of emotions well reading it. Sadly I no longer have access to a copy or I would pick it up again now that I'm in my 40s and experience as similar ride well reading it as I am sure the book will hit you in different ways as you age and grow.