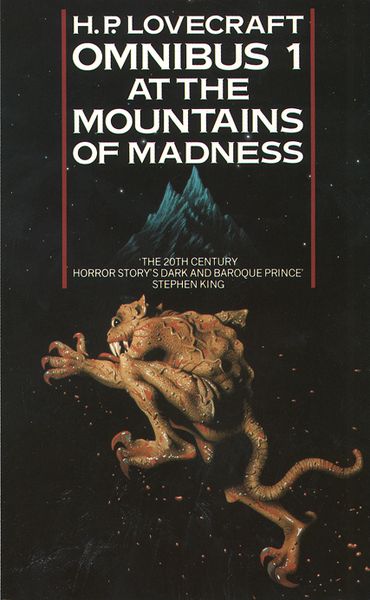 'Warning! You are about to enter a new dimension of utmost terror. When you open this book you will lost - lost in a world of dreadful nightmare brought to screaming life by the century's greatest master of adult fantasy and horror' - H.P. Lovecraft. Here is a collection of the most famous stories of this master of tomb-dark fear: "The Rats In The Walls", "The Call Of Cthulhu", "The Haunter Of The Dark", "Pickman's Model", "The Lurking Fear" plus other tales designed to haunt your dreams and bring you to sweat-soaked wakefulness in the darkest reaches of the night! "Terror in the fourth dimension! A master of cosmic horror"

Three giant collections of Lovecraft's stories, all published by Panther Books in the United Kingdom in 1985. The garish covers were done by Tim White, a British artist known for highly detailed science fiction art. While I can't deny that these are eye-catching and probably sold a ton, I can only imagine how displeased ol' Ec'h-Pi-El would've been with the explicit gore... 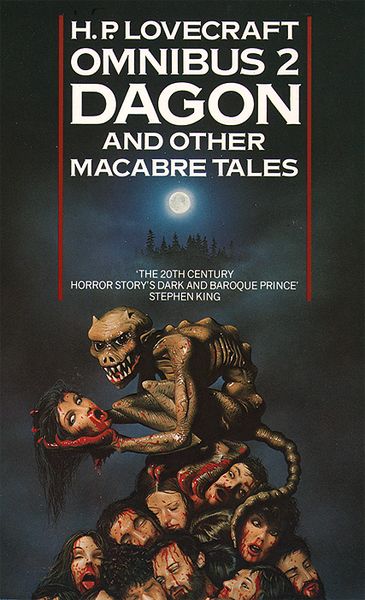 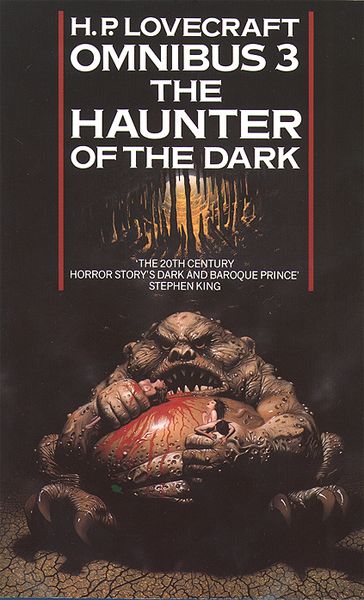 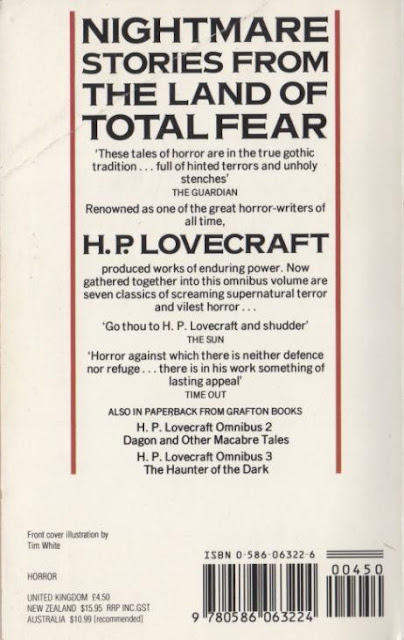 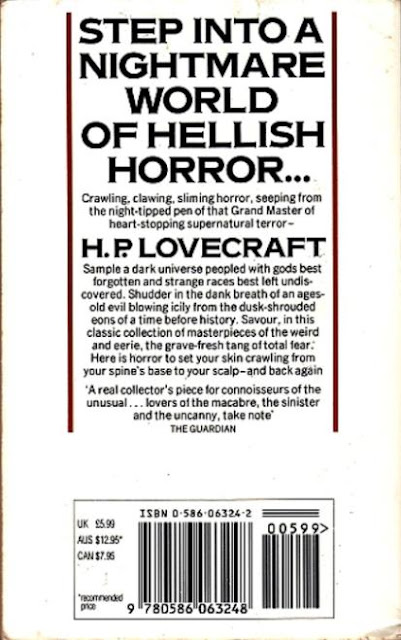 Posted by Will Errickson at 9:30 AM

I first read Lovecraft's stories in these editions as a teenager and, being somewhat over-serious in my appreciation of HPL's work, I hated these cover illustrations so much that I actually tore off the cover to Volume # 3 (with the goofy monster eating naked ladies), and burned it!

Being a bit older and more laidback about such things (and with a bit more of a taste for OTT pulp imagery), I now actually qutie like the sheer ridiculousness of these illustrations, and they certainly make a nice contrast with the more "respectable" Lovecraft editions that have appeared in recent years.

Moreso than the gore, I'd imagine HPL would be put out simply at the fact that none of these covers are even remotely consistent with the tone or content of anything he wrote... but hey, hopefully we can all share a laugh about it, now that he's a mainstay of Penguin Classics and I'm a grown up who no longer has to sit on the bus in the morning imagining people are condemning me as a sicko for reading such awful trash, etc.

I still have all three volumes lined up on the shelf - third one sans cover - and still go back to them frequently. Probably the cheapest/most compact way to get Lovecraft's complete works in one place between soft covers (crappy as they look, they do contain pretty much every scrap of legit HPL prose, give or take a few of the 'revisions').

I don't know, I always thought Omnibus 2 is a nice version for stories like Pickman's Model or The Rats in the Wall. Of course HPL didn't well on gore and he would doubtless have been aghast about it - or the naked women - but I can't imagine that his pals from Weird Tales would applaud this either. Still, if you would put the "unspeakable" on a page, it would look like this. Ripped off heads and all.

I always liked this edition. Like Bob wrote, it has every story. There are worse Lovecraft collections.

Love the cover art on those! The monsters have an unusual style to them.

Ben, excellent points all. I was probably an over-serious fan myself as a teen!

Andy, yep, those are the "unspeakable" images indeed...

Naked Eye, they certainly do!

Thanks for commenting everyone!

Of course HPL didn't well on gore and he would doubtless have been aghast about it - or the naked women - but I can't imagine that his pals from Weird Tales would applaud this either.

I dunno, it seems that some of the 'Weird Tales' crowd (I'm looking at YOU, REH) would put in
scenes of whippings in order to score a spicy cover by Margaret Brundage.