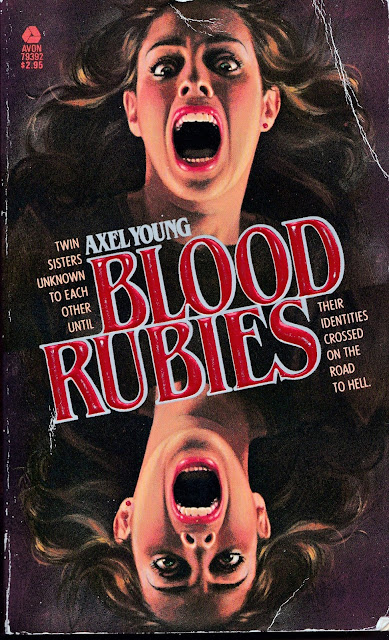 More a suspenseful melodrama than an outright horror novel, Blood Rubies (Avon Books, Apr 1982) was published under the pseudonym Axel Young. Really it was Michael McDowell and pal Dennis Schuetz, who also collaborated on a gay mystery series and "Tales from the Darkside" screenplays. I found it highly readable fun, a smart fast-paced story for the most part that took me two days to read. This tale of twin sister fate twisted like a DNA helix could have been a swell TV-movie back in the day, starring perhaps two young night-time soap stars (or maybe just one in the role of a lifetime!). While I'd hoped to find out some backstory on those precious titular jewels—if they held some supernal agent within—I was still fairly satisfied overall, if a bit baffled by the abrupt conclusion. But as I've said before, I prefer that to an ending that lasts forever. 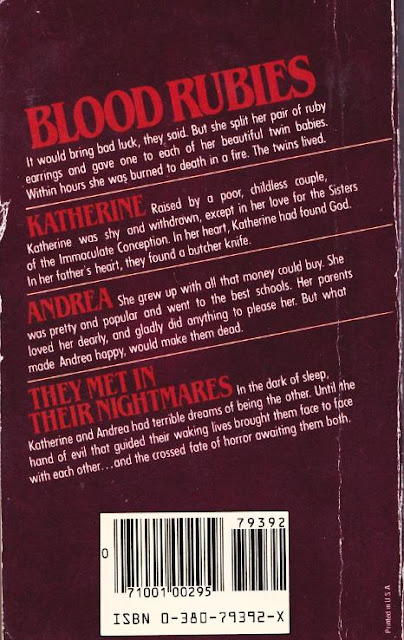 Back-cover copy does a good job of setting up the tale. Prologue is all gloom and doom on New Year's Eve 1959 as a woman gives birth in a tenement building in Boston's North End. A winter storm approaches in the night. Twin girls are born, one on either side of the new decade. The only thing the distraught mother, Mary Lodesco, has to give them is a pair of ruby earrings which was given to her by her mother, which she demands the midwife affix to the girls, one each. Bad luck, the midwife mutters, to separate them, but she does so. Woman and children sleep but are awakened by, of course, a raging fire set accidentally by a drunk on the first floor. Only the twins will survive; separated, but alive. One is found and given up for adoption; the other is stolen away, unseen, presumed dead...

The first half of the novel is the adopted twin's story. Raised by a religious working-class couple outside Boston, young Katherine Dolan attends Catholic school and wants nothing more than to become a nun in the order of the Slaves of the Immaculate Conception. She is quiet, not very popular nor very intelligent. Her adoptive mother Anne is a McDowell type through and through: pious, short-tempered, petty, delusional. James, the father, strolls in drunk and begins to engage in my least favorite trope of '80s horror; you can probably guess what happens, I mean it's even there on the back cover. 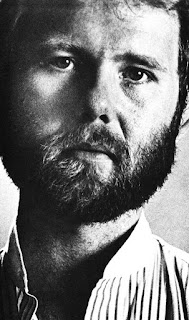 The nun stuff gets a bit much, it really does, lots of details about getting into a nunnery that may test one's patience. It all rings true, though, I guess, but what do I know? Still the authors get inside Katherine's head to show the disconnect between her desire to be a bride of Christ and her desire to escape her parents at any cost (In her father's heart, they found a butcher knife). What troubles her however is her continuing dream of a beautiful popular girl, herself perfected... and at the end of Part I and the beginning of Part II, the two young women who share a pair of ruby earrings set eyes upon one another.

In the second half of Blood Rubies we meet Andrea LoPonti, the child who was stolen away and raised with no knowledge of her origins. The LoPonti family is also devoutly Catholic but there the similarity ends: the family is well-off and well-respected. Andrea wants for nothing, is brilliant and ambitious, if sheltered from reality. As she sets off to college, we follow her as she again and again is exposed to the harshness of the world outside a Boston suburb. This stuff was my favorite part of Blood Rubies, Andrea's forays into the early '70s singles' bar scene in Boston, casual drug use, and travels throughout Europe with bestie Marsha. The two girls want nothing more to become worldly; when Andrea meets leather-clad bad-boy Jack, she becomes worldly in a hurry. Reminded me, unexpectedly, of those first two Bret Easton Ellis novels, Less Than Zero (1985) and The Rules of Attraction (1987)... except several years earlier than those. 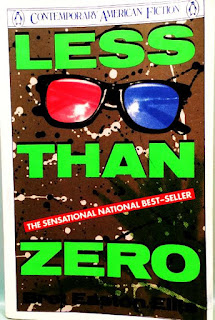 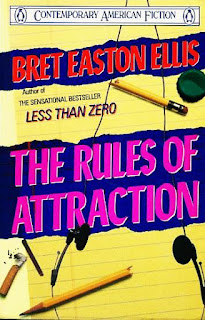 The aspects of McDowell's skills that make him great are shown off well here, as he peers inside the lives of two different families and two different women. He knows people, and this sets him apart from other paperback original writers of his era. We'll go down dark paths, not necessarily supernatural, but bloody and horrific all the same, yet we'll always be accompanied by someone who knows the territory. When Katherine and Andrea finally meet everything is up-ended; that good girl/bad girl dichotomy is flipped around again. Irony abounds. The mechanics near the end are almost unbelievable: pulpy, near camp, kinda sleazy but oh so fun (the role of a lifetime!). An abrupt climax at first baffles but chills on afterthought. Blood Rubies will be a pleasure for McDowell fans; sure, it's a minor work in his oeuvre, yet still a worthwhile read. 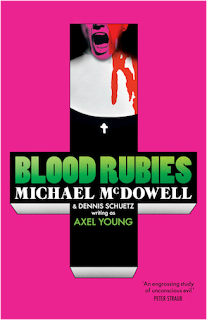 Posted by toomuchhorrorfiction at 9:39 AM

Thanks for the (as always) great review. I've been strongly eyeing this one and WICKED STEPMOTHER, the other Axel Young tpb that Valancourt released recently -- so it's good to hear it's as safe a bet as I'd imagined. Hard to go wrong with McDowell.

I'm glad they reprinted this... it's one I missed, and I hate to miss anything by McDowell.

I'm currently re-reading Cold Moon Over Babylon, and it still holds up. I also recently read one of the action-series books McDowell wrote under a pseudonym (the Michael Sheriff: The Shield series, by "Preston MacAdam") -- also very good. Maybe a little more character-heavy than the usual shoot-guys-and-blow-stuff-up things you'd find in an Executioner book or whatever, but, with McDowell's writing skills, I didn't mind sacrificing a few numbers in the body count.