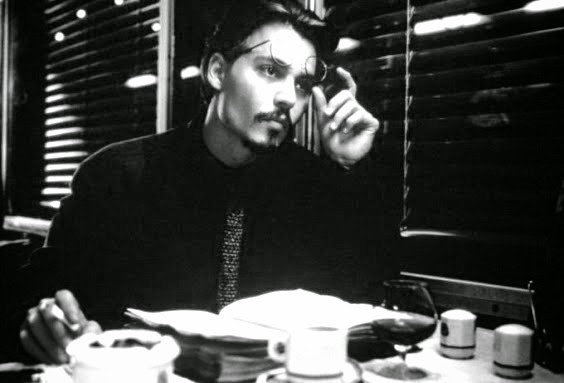 OK everybody you know the drill: any ideas about any of these? Numbers 2 and 5 sound maddeningly familiar to me.

1. Back in the way back (1963-4) my dad gave me an anthology of one page horror stories that were so well written, I still, these many years later, will not eat a can of food sans wrapper--even if it's from my own pantry. There were also two stories about babies--one read as a prisoner escaping his cell, turning the bars, pretending to sleep when the guards came by, only to find its a toddler in his playpen.

2. This book or digest actually had short stories in comic-book form but they weren't comics per se.  Two of the stories I do remember went like this and apparently these stories were based on some type of true events.

The first story involved a guy who was caught in a terrible storm.  He found refuge in a dilapidated castle.  It was there that he met a lady who stated that this was her home.  He extended his stay and they fell in love.  Her only condition was that he may never see her either in the daylight or in any sort of light (don't remember which).  They had two kids together.  One day, he broke that promise and saw her for what she was.  Some sort of monster (kind of a cross between a wolf or bear) that walked upright.  Needless to say, she banished him due to his mistake and his kids also were these creatures.

The other story involves a guy who basically wants to get rid of his wife (for whatever reason).  So he takes her into the woods.  Of course, he gets out of there and abandons her leaving her to the wolves who do kill her.  After a period of time, the guy is looking out into the woods from his balcony when he sees the ghost of his wife floating toward him.  Not believing what he sees, he leaves his house to follow said ghost.  She continues to float about 15-20 feet off the ground and leads him into the woods.  The last scene is of him getting attacked by wolves (probably the same ones that attacked her).  In other words, she got her revenge by getting him ambushed.

3. Titles by the same author. All of the were about serial killers who dispatched their victims via a special method (e.g., drowning, suffocation, burning). Each cover depicted a woman's face as she was being murdered by that book's method. For example, the suffocation book's cover sports a screaming woman's face in a bag. The drowning book shows a woman being drowned from underwater. Found! It's the Dean Grant series by Robert Walker. Yikes: 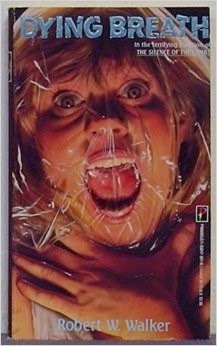 4.  I'm probably grasping at tentacles here, but on the off chance, but I'm trying to remember a fantasy-horror story or novel that would have been released in the early 1990s (?)- based on the fact that I heard about it in a GALAXY Bookshop [an Australian specialist bookseller] mail newsletter from then, in a special insert devoted to the upcoming output from this particular author (a somewhat famous one I think) - the primary sequence in an excerpt was about a little man, Mr Pix/Puck/Pim(?), arriving outside the door of a main character in a cardboard box like a homunculus. If memory serves the backdrop was of a strange hotel or lodging in some weird town. I don't have much more info than the above, but I've always assumed it was Thomas Ligotti, but I probably have been incorrect. Found! It is Ligotti: "The Bells Will Sound Forever," and it's in Mammoth Book of Best New Horror: Volume 9 (1998). 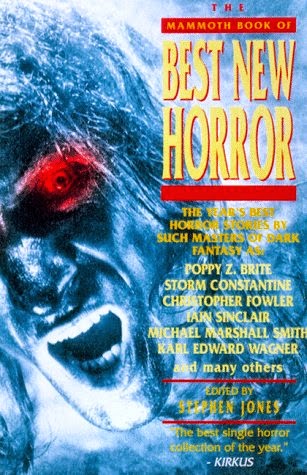 5. A detective is investigating the murder rape of a young girl. He arrests a man (a dwarf) who confesses that he had done that in a ritual to obtain wings. The detective has no other proofs, so, in order to punish the rapist he torn out of his back the budding wings already growing there. Found! It's "A Fly One" by Steve Sneyd, found in both Whispers III and Year's Best Horror VIII. 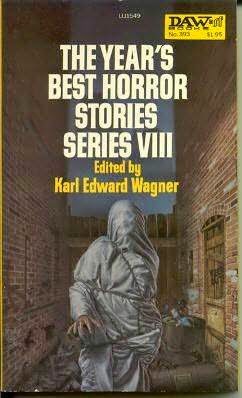 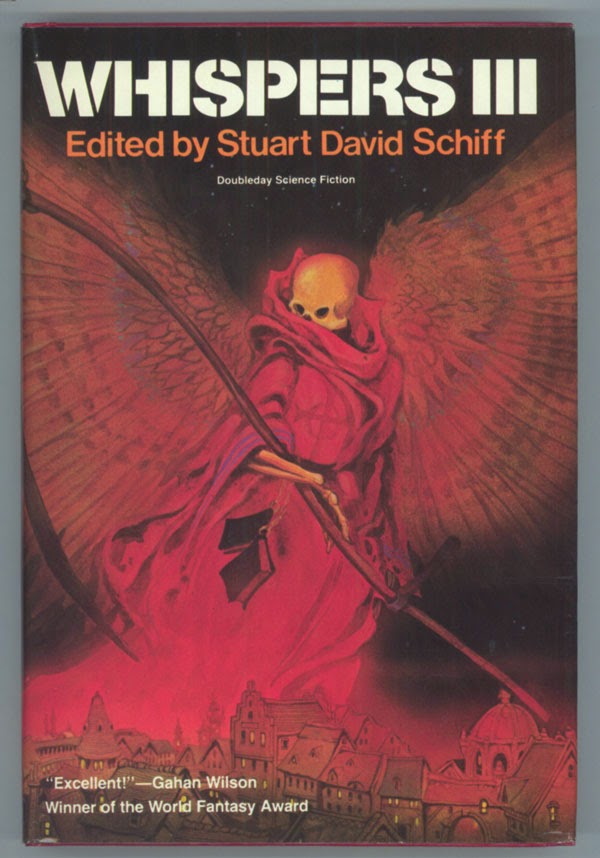 6. Late 1990s or early 2000s. Set in the forests of the northern U.S., or maybe Canada. Plot ultimately centered on a werewolf, and I think it featured a woman heroine.

Story begins when a man of American Indian heritage, living in a cabin in the woods alone, wakes up one morning in early autumn to find that a spider has spun a web across his porch. The man’s Indian heritage leads him to take this event as a sign of an early and harsh winter, and also as a possible omen of something much more dreadful. The man’s misgivings are then amplified into a sense of impending doom by a second incident on the same day: While walking in the woods, he is attacked by a savage, angry rabbit. This latter incident convinces the man that he is going to die that winter, and he does in fact die in the course of the book. I remember that these opening pages set a magnificent sense of dark impending fate in the midst of the bright colors of a beautiful autumn morning.

The action culminates in a hunt in which a giant wolf—or maybe werewolf—is killed. The heroine is involved in the hunt, but I think that she might be something akin to a werewolf herself.

7. Horror trilogy and the first book is about a Korean vet who becomes a priest. His wife is part of a satanic cult and married him only because she knew he would eventually lead a group against the cult. There are creatures that guard a cave, and if one of these creatures bite you, you turn into them, kind of a Neanderthal monster. Also, if you have sex with any of the cult, you also are turned. The preacher leads the battle against the cult and in the first novel, winds up in a fight (although it is just assumed in the writing) and even though he lost, the devil left a remark about how he was a great adversary. Two sequels followed in which the girlfriend of the preacher gave birth to a child, and also one of the women of the evil cult seduced him in the fight with the devil and she gave birth to a child also. Found! It's William W. Johnstone's early 1980s Devil series from Zebra. 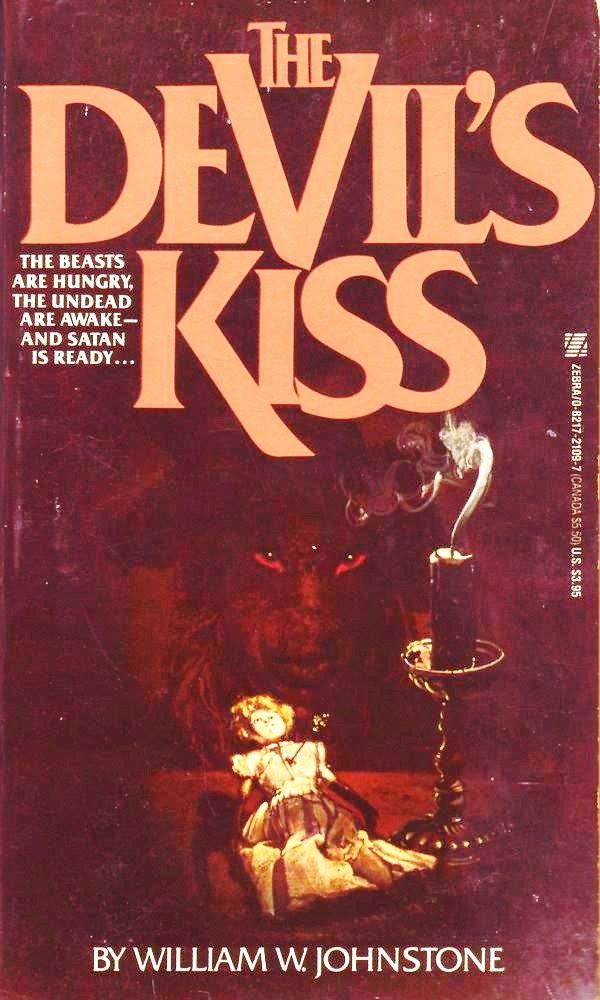 Posted by Will Errickson at 8:44 PM

7. is definitely the DEVIL'S KISS series by William Johnstone. Found those at a beach house as a kid, and haven't been entirely right since.

So number 3 is Robert W. Walker. He's been quite prolific over the years, but the particular books mentioned were published by Pinnacle in the mid to late 80s. Titles like Dying Breath, Dean Man's Float, Razor's Edge. He can be found on Goodreads.com

Thanks for the quick responses!

I believe #5 is A Fly One by Steve Sneyd from Years Best Horror Stories VIII.

I don't know #2 but the first story seems to be an adaption/variant of The Woman In The Snow from Kwaidan. Another variation turned up as Lover's Vow in Tales From The Darkside: The Movie.

Thanks, drunkathomedad! I found "A Fly One" in my copy of WHISPERS III and just read it--correct. And yes, #2 I recalled from KWAIDAN, as well as from TALES, but otherwise I'm not sure about the comic-book format.

#4 is "The Bells Will Sound Forever," by--you guessed it--Thomas Ligotti.

"His body remained unmoving upon the floor in a state of sleepy paralysis, and yet he heard the sound of the jangling bells. Crumm thought that if he could just open his eyes and roll over on the floor he could see what was making the sound of the bells. But soon he lost all confidence in this plan of action, because he could no longer feel his own body. The sound of the bells became even louder, jangling about his ears, even though he was incapable of making his head move in any way and thus shake the bells on his two-pronged fool's cap. Then he heard a voice say to him, 'Open your eyes... and see your surprise.' And when he opened his eyes he finally saw his face in the wardrobe mirror: it was a tiny face on a tiny fool's head... and the head was at the end of a stick, a kind of baton with stripes on it like a candy cane, held in the wooden hand of Mrs. Pyk. She was shaking the striped stick like a baby's rattle, making the bells on Crumm's tiny head go jingle-jangle so wildly. There in the mirror he could also see his body still lying helpless and immobile upon the attic floor. And in his mind was a single consuming thought: to be a head on a stick held in the wooden hand of Mrs. Pyk. Forever... forever."

The Ligotti story (#4), can also be found in his 2007 collection TEATRO GROTTESCO, only under the title, "In A Foreign Town, In A Foreign Land," and in slightly different form, I believe.

#2 sounds an awful lot like something from Mystery Comics Digest, which reprinted various comics stories from Gold Key/Western Comics titles that included Ripley's Believe It or Not and Boris Karloff. These stories often claimed to be based on true events, which is what makes me think this is probably the source. There's no source of story synopses on-line that I've found, but there are cover galleries and story credits in places like the following -- http://www.comicvine.com/mystery-comics-digest/4050-2589/