Build Me a Woman: The Horror of Playboy Paperbacks 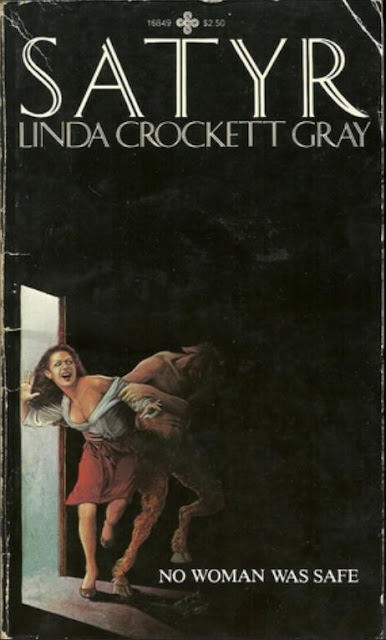 During the early 1980s, the Playboy empire, perhaps unsurprisingly, extended its reach into the paperback pulp fiction market, publishing dozens of horror, occult, fantasy, science fiction, and crime novels under its Playboy Paperbacks imprint. Not all were paperback originals, simply reprints of books sometimes published years before. I've long seen the little icon on various titles I've picked up in the last couple years, on even "respectable" stuff like anthologies edited by Charles L. Grant and Stuart David Schiff. Here however I want to focus here on the tawdrier side of their cover art, that very retro conflation of horror and cheesecake that you know Playboy could do right.

Satyr (1981) hits a couple uncomfortable notes but how could you think such a title wouldn't? This cover is amazing though in its utter tackiness. Linda Crockett Gray wrote half a dozen or so horror novels, some later published by Tor in the 1980s; I've got one or two but haven't read them. 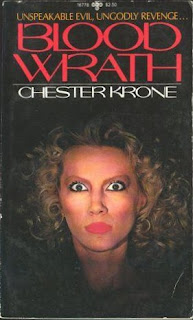 Blood Wrath (June 1981) kinda freaks you out with its Revlon model going all crazy eye killah on you. Whither hast thou gone, Chester Krone? 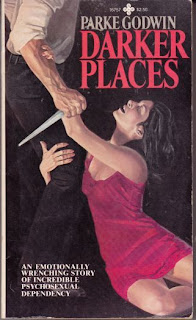 Darker Places (Dec 1980) features some gender, er, politics I'm not sure I wanna parse. Is the woman clad in a negligee trying to defend herself from a psycho killer, or is the male - veins bulging in his bare forearm, nice obvious allusion! - protecting himself from a desperate, crazed, suicidal woman, prefiguring Fatal Attraction? Parke Godwin has at least written lots of SF/F. Night Screams (Mar 1981) could trade in some ambiguity with those luscious lips and perfect teeth, engaged in some playful bit of - oh, that tagline... nope. Pronzini and Malzberg collaborated on several crime thrillers which I've yet to read. 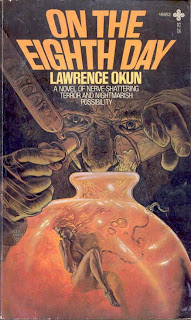 On the Eight Day (June 1981) God built a woman? I dunno, I thought He'd already had that covered. Lawrence Okun, no bible scholar he. 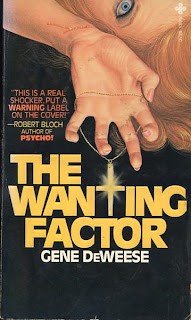 The Wanting Factor (1980) makes me wonder where I can get one of those gold t-shaped pendants. 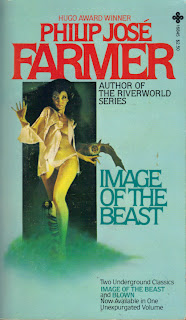 Image of the Beast (1979) Farmer wrote mostly SF but this novel is apparently based on Gilles de Rais, so of course, you know, fuck yeah. Love the vampire lady, don't know what she's got to do with the story though. 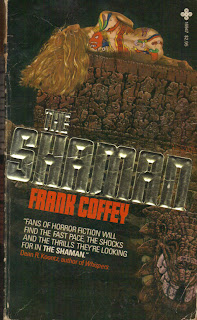 The Shaman (Mar 1982) isn't too lurid but back 30 years ago it was probably still fairly scandalous for women to have all-over tats. 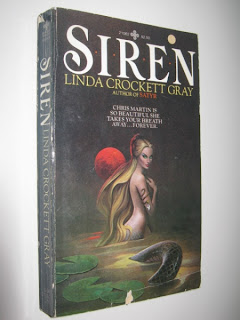 I've saved the best for last. This gorgeous cover for Siren (May 1982) - the only good image I could find of the book on all the internets - is captivating (natch). Love the turquoise eyes! Compare this cover to the shit Tor reprint one. Ouch.

Supposedly THE WANTING FACTOR is about Jesus being a vampire...

Never read the book itself, just read an interview with Clive Barker that mentioned it...

Ha, that sounds awesome! In fact that was supposed to be *my* first horror novel back in 1989! Oh well.

Pretty insane covers. I like The Shaman best because of the dramatic angles, the interesting, I think stone, beast. And the naked lady!