Elizabeth by Jessica Hamilton (1976): She'll Reflect What You Are In Case You Don't Know 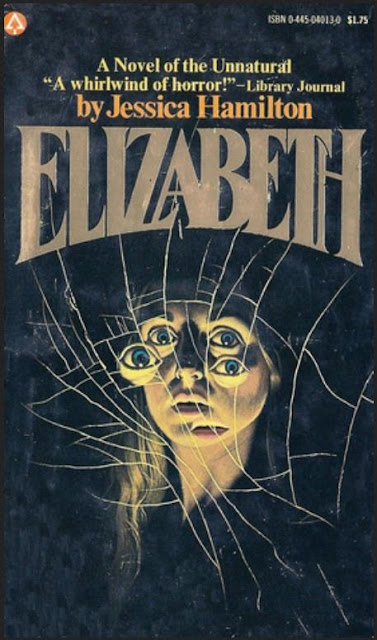 "It doesn't follow, Elizabeth,
that because you are old enough to be evil,
you are an adult."

So says Grandmother. And so will any reader say upon finishing Elizabeth, the debut novel from Ken Greenhall, writing under the pseudonym Jessica Hamilton. At just 14 years old, Elizabeth Cuttner is a startling little sociopath with powers natural and not (A Novel of the Unnatural states its tagline). She tells her story in a voice quite distinctive, yes, but also as cool and unforgiving as a marble tombstone. With dispassionate precision, she grasps the motivations of those around her, fathoms their subconscious desires; Elizabeth has psychological insights that people thrice her age never attain. She amazes, charms, bewilders, and ultimately horrifies. When I was younger, she tells us on the very first page, I saw James, my father's brother, look from our dog to me without changing his expression. I soon taught him to look at me in a way he looked at nothing else. And oh that's just a hint of what's to come. 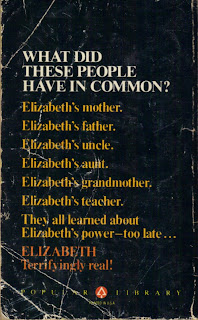 Elizabeth lives in lower Manhattan, in a very old building not far from the once-bustling harbor. Her grandmother appears each evening in a full black dress and tells ever-changing stories about the family's ancestry at dinners to the remaining members of the Cuttners: the aforementioned James, her son, his wife Katherine, and their son Keith. Their live-in servants are the Taylors, who reside in the basement but have little interaction with the family (I suppose there is no need to speak to those whose dirt and appetites you know intimately). Grandmother's husband left her years before, but his office building is next door. Oh, Elizabeth's parents? You can probably guess why they're not around, can't you? 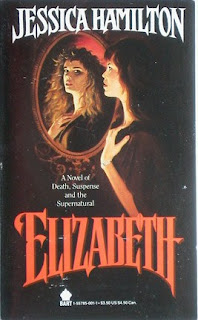 The supernatural slips in very early but oh-so-quietly. In the second chapter, Elizabeth and her parents vacation in a cabin at Lake George, and while on a nature walk she finds an unlikely-looking toad the color of decaying meat and takes it home, then she is compelled to hold it between her breasts. As she does this, a visage swims into view in the antique mirror in her room. "Do not fear me, Elizabeth. I have come to help you." She has a fearsome beauty and speaks in an antique language; her name is Frances, a distant Cuttner relative; indeed, we learn she is an English witch from centuries past. Elizabeth seems to fall in some kind of love or obsession with Frances, who wants to reveal and guide all of Elizabeth's familial powers... and warns Elizabeth of the new tutor from England that James has hired for her, Miss Barton. Young Miss Barton, who strangely resembles the woman in the mirror... 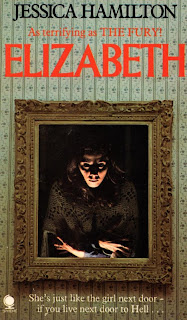 There's all that, as it's said, and more. There is barely a whisper of actual violence or overt sex, yet the novel seethes with these powers, and the tone throughout is cool, almost affectless. Affairs that speak more of desperation and opportunity than real human feeling spring up in the home. Elizabeth is no Lolita-esque coquette; she is a young woman who accepts impassively the male sexual appetite - especially when it serves her own needs and ends. Her knowledge of male vanity, and flattery of such, is complete. Elizabeth notes that James feels about the Don Juan legend the same way a priest feels about the New Testament. Something seems to be going on between Katherine and Miss Barton too, but that's only par for the course:


James had never been happier. He accused Katherine of being in love with Miss Barton and pretended to be outraged. Actually, the thought of his wife being involved with another woman excited him... he became much more open about his relationship with me and on afternoons when Katherine and Miss Barton were uptown shopping together he would take me to his wife's bed. "You be Katherine," he'd say, "and I'll be Miss Barton." 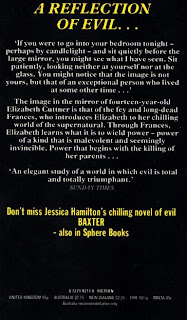 Elizabeth is one of the most intriguingly written novels I've read in some time; it is deceptively rich and rewarding. Hamilton's style is one of allusion, of casual reference, an author in full command of the writing craft, knowing what to tell, what to show, and most especially what to conceal. And ironically in that concealment revealing all. Elizabeth herself is an amazingly complex character, her voice so confident, so ageless, so wise, as she begins to use her unnatural talents to harm others, such as Grandmother...


"Martha," I found myself saying, "with my gift and  power I bid thee desist. Martha Cuttner, I bid thee vanish. Thrice, Martha Cuttner, my gift and power bid thee desist and vanish."
And then there was silence. Behind me stood the city and its people. Some of those people had passed me on the street and admired me, thinking I had never done unmentionable things in the night, as they had done or wanted to do.

I really cannot recommend Elizabeth highly enough. This unheralded, forgotten work deserves rediscovery by fans of weird fiction. Copies are easily found online and I urge you to purchase one. If you enjoy the literary chill of calculating children, the frosty tales of du Maurier and Jackson, the quiet horrors of witchery and those it dooms, the foolishness of men in the thrall of women, do yourself a favor and become acquainted with Elizabeth.

For a little more on Greenhall, check out the Phantom of Pulp's blog.

I've very happy that you've been well rewarded by 'Elizabeth'. It is one of my favorite novels of all time, a quiet and disturbing classic. Greenhall/Hamilton possesses an amazing command of the language, and insinuates so much so deftly.

I'm very happy that you've been well rewarded by 'Elizabeth'. It is one of my favorite novels of all time, a quiet and disturbing classic. Greenhall/Hamilton possesses an amazing command of the language, and insinuates so much so deftly.

Wow, I'm now obsessed with finding this novel, which I'd never heard of before. Usually I like to hunt used book stores--it's more fun having to search, imo--but I may have to cave and order it from Amazon.

Thanks guys! Mr. Tripper - nice - I actually found this paperback in a local bookstore. Almost missed it, it's so tiny.

Sounds like it will be my kind of book (especially with the Jackson comparison)... Interesting. Thanks for the tip!

A very good book. I read it in its initial paperback release in the 70's and never forgot it. Found it again and reread it in 2007 and thought it still held up. Loved that original cover art too.

Just ordered the book version of BAXTER after being chilled from watching the movie.
Book is not cheap and has been out of print for a long time.

Hell no, Tim. Might be the most expensive book I've seen in the paperback horror genre.

...and worth every damn, evil little penny.

Thanks for the heads up on this.I've never read it, and it sounds like it's right up my alley.

I'm glad you did this review, 'cuz I picked this book up at a library sale for a quarter probably ten years ago and it's just been sitting in my stacks, unread. So, after reading this review, I pulled it out and read it, and... wow! I've gone back and hunted down the author's other stuff (even found an affordable copy of Baxter... it was still kinda steep for a used book, but at $12 it was affordable for that one). Definitely a find, glad you clued me in!

I purchased this on the strength of this review. I'm so glad I did. God, what an unsettling and compelling book.

I've only just gotten hold of this book, as well as HELL HOUND, thanks to the wonderful necromancers over at Valancourt Books, who always seem to know just what needs resurrecting. (They've also reprinted CHILDGRAVE, though it doesn't seem the ebook edition's out yet.)