A Manhattan Ghost Story by T.M. Wright (1984): It Was Their Town, and It Always Would Be 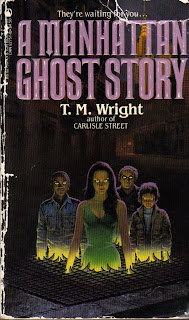 For weeks now I've been slowly getting through A Manhattan Ghost Story, the seventh horror novel by T.M. Wright. He's a prolific but rather cultish author whose first book, the oddly poetic and ambiguous Strange Seed, I read and reviewed last year; it left me nonplussed, unsure of how I really felt about it. But Wright had skill, a manner and tone I found intriguing, so I didn't give up on reading another horror novel by him. Then I happily found a copy of MGS, feeling that his talents would lend themselves well to a quiet tale of haunting in the Big Apple. Dared I hope for, I dunno, Woody Allen meets Roman Polanski (to put it in cinematic terms)? Well... yep, kinda I was hoping for that! But now, I'm feeling that same ambivalence about this novel too.
A photographer named Abner Cray visits the city to do a coffee-table book of his work, staying at an old friend's empty apartment. He muses obsessively on the nature of death and the dead but not in any way I found insightful or surprising. A struggle, trudging through "poetic" elegiacal passages such as Yes, definitively, this is what it's all about, this is what Death is all about; sit back now, I'll tell you, my God, they'd swarm all over like angry bees, the dead would, like angry bees which appear again and again throughout the narrative. Then there's flashback chapter sections in which Abner and a delinquent friend break into a mausoleum as young teens in 1965, which contain some really and truly clunky, amateur-hour prose and dialogue (if I read one more conversation in which two characters say one another's names over and over again...).

The present day sees ghosts intermingling with the living in a sort of purgatorial New York City. At least, if you can't figure out that the odd people who speak in repetitive near-riddles to the narrator are merely shades of the dead - well, there, I spoiled it for you. But I didn't really: the book is titled "A Manhattan Ghost Story" - what else is the reader supposed to expect? Just look at the Tor paperback's cover art! 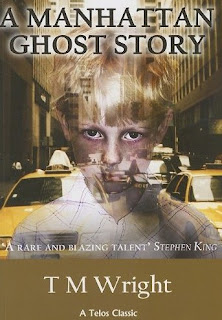 Anyway, I had to give up two-thirds of the way through, and quickly skimmed the final chapters. Don't feel like I missed much. There's an interesting story here, absolutely: Abner's friendship with a man who's abandoned his apartment and left the country because he murdered someone; his burgeoning relationship with that friend's ex-girlfriend; Abner's own past in which he'd slept with an attractive cousin; his misadventures in the dark and gritty city streets and parks and apartment buildings. But there's little atmosphere and, as I said, you pretty much know what's coming. The pacing is stop/start and the editing should have tightened up a lot of the writing. I felt like MGS was an old manuscript Wright had in a desk drawer and turned it in without rewriting it.

I really wanted to like A Manhattan Ghost Story; I haven't read a good ghost story in some time, and I felt the Manhattan setting would work to Wright's advantage. It's just that I don't think he took enough advantage, certainly not enough to convince this reader. He has some real fans, though, as his Wikipedia page reads more like disguised fanboy gushing than impartial biography (who gives a fuck who the movie rights to MSG were bought by and which celebrities were attached to act in it? You don't see that in other Wikipedia novel entries). Not finishing a book is one of my great pet peeves, but it really is the only sensible course: three weeks of reading and I didn't even make it to page 250 (out of 381). My shelves are overstuffed these days; what would you have done?
Posted by Will Errickson at 3:00 PM

Don't beat yourself up about it, Will. I've reached the point where, if I can neither remember where I left off in a book or if I'm very clearly bored, I have 0 problems dropping a book. There's just too much out there to read to waste time on boring crap.

Haven't really checked out T.M. Wright just yet. Perhaps I'll avoid him in favor of digging deeper into Charles L. Grant's stuff (just picked up "The Hour of the Oxrun Dead" and "Jackals").

More than a few times I've just skipped to the end of a book: I get to know the ending, the big reveal, but I don't have to slog through a terrible book.

I don't think you're breaking any genre laws or being inconsiderate. Authors have a responsibility to be clear and to entertain. In his latest novel, Stephen King lay it all out through the voice of his main character: this is what happened. And this. And this.

Authors have a responsibility to be clear and to entertain

I read a few of T.M. Wright's books back when they were originally published. I wanted to like them more than I actually did. I could never quite put my finger on it, but the best I can describe it is there was no "there" there. The characters never felt real, the plot seemed to just be a meandering of whatever the author thought up next, etc.

However, I must disagree with Francisco's comment. Authors only have responsibility to themselves. If they're happy with what they've written, and it's published, they've done their job. They owe a reader nothing. If you don't like the book, you can return it and get something else. Just because you don't like it doesn't mean everyone else doesn't.

ehem... I was quoting Mac Campbell

Mac Campbell:Authors have a responsibility to be clear and to entertain

I think that at least in genre fiction the authors have a kind of responsability, genre conventions and that kind of things that literary fiction authors don't have

I, also, can't agree with francisco's statement that genre authors have a responsibility. The statement is too absolute.

No writer or filmmaker owes a reader or viewer ANYTHING. They can do whatever they please.

On the other hand, if you want to reach a broad audience, certain approaches will work better than others.

General audiences like their entertainment clear and simple. Just watch today's movie trailers to see how everything is fed to an audience on a spoon.

TM Wright is a favorite writer of mine for reasons I've often outlined in various posts on my blog. His work is not mainstream or accessed easily.

I first read him when I was in my late teens and he had a real impact on me. His books were like very troubling dreams, the horror like echoes, the dread like whispered obscenities you can barely comprehend.

As I consider Mr. Wright a valued friend these days, I'll leave my argument at that. To me, Mr. Wright's work is satisfying approached from a certain angle. Not everybody will find that angle.

I'm no more "right" about his works value than anybody who sees no value, but I do know that it has had a powerful impact on me and I respect his uncompromising approach to storytelling very much, a type of storytelling that comes from a complex, frightening place.