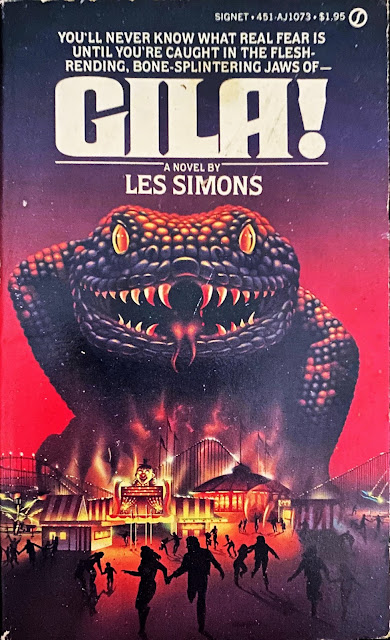 Boasting one of the purest examples of vintage horror paperback cover art, Gila! is a title burned into my brain from discovering it when it first appeared in the spinner rack of my local library. I was 10 years old when it was published by Signet Books in October 1981, and mesmerized by the carnival barker-like tagline, as well as its back cover copy that luridly mixed sex and death into one noxious stew that froze my child's brain. Plus that exclamation point!

I don't recall if I actually read the book, I doubt it, but I cannot forget the sense of the forbidden, the aura of "don't let an adult see you looking at it" that came off it like a miasma. I was taken by the stark simplicity of the cover art, familiar with movies like Them! (there's that exclamation point again!) and other giant-animals-run-amuck movies thanks not only to Saturday afternoon creature double features but also my endless hunger for devouring the weekly TV Guide and monster movie books checked out from that same library. Gazing at that lurid, gaudy cover enflamed my imagination, about the same way dinosaur picture books did. Thanks be to the wonderful artist Tom Hallman for his mad skillz. 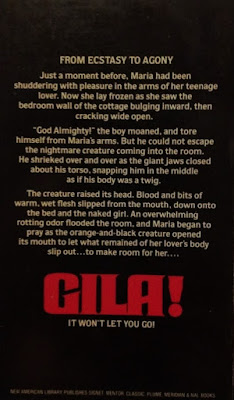 "Les Simons" is the one-time pseudonym of Kathryn Ptacek, who wrote and edited a fair amount of horror fiction and nonfiction in the Eighties and Nineties, and still puts out short stories today. Born in Omaha in 1952, she was raised in Albuquerque, and much of her fiction is set in the American Southwest and utilizes local native mythologies. The anthology Ptacek edited in 1988, Women of Darkness, is a terrific high point of the era, featuring only women writers (there was a second volume as well, which I haven't read and was only issued in a Tor hardcover). She was married to esteemed "quiet horror" writer and editor Charles L. Grant from 1982 until his death in 2006. 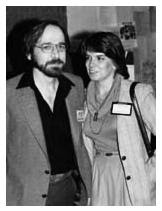 Now, four decades later, and Gila! is hard to find these days, and try as I might I cannot remember how I came to have a beat-up copy in my library. I used to be good at that, remembering when and where I'd gotten the books in my collection, but as the years have piled on and the shelves get bigger, I can't keep that info in my head anymore. No matter. I read this guy in a couple days, the kind of book you don't expend a lot of mental energy on, it's pure pulp with all that entails. 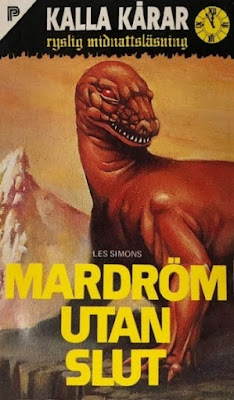 Main characters are having sex in the midst of all the monster mayhem, disposable stock characters arrive on the scene and spout cliches, everyone says everyone's name a million times in conversation, dated references to native peoples, simplistic musings on the environment, war, nuclear power. And oh yeah, the depiction of giant, nuclear-radiated Gilas chomping on us poor humans! It all veers close to the inanity of gore "classick" Eat Them Alive; no attempt at gritty realism, but only the absurd descriptions of violence and carnage. And yes, the cover art is a thing that happens...

The Gila monster reached its massive head down and began chewing on the bodies at its feet, pawing through them as though searching for a choice morsel. Legs, arms, and torsos disappeared into the cavernous maw. Disjointed bones, flesh still clinging to them, were scattered...

Recommended reading for all you monster maniacs, you know who you are!