The Little Girl Who Lives Down the Lane by Laird Koenig (1974): Did He Go Away and Leave You All Alone 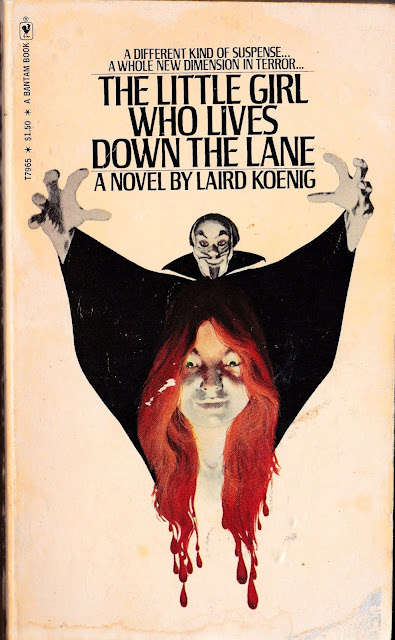 A mainstream suspense thriller with plenty of '70s vibes, adapted into a fairly well-known movie (if you follow cult films I guess), the 1974 novel The Little Girl Who Lives Down the Lane (Bantam Books paperback edition, Feb 1975, cover artist unknown) was author Laird Koenig's second novel. He'd written TV teleplays and screenplays, and the structure, setting, and characters of Little Girl feels like an intimate stage play, taking place as it does in a rented home in a small New York village. Creepy cover art by artist unknown shows a spoooky girl whose tresses transform into bloody gore while a vampire phantom sort hovers in gonna-getcha pose. You won't be surprised to learn this imagery is misleading.

Our story begins on Halloween night, the kind of evening the little girl liked best... 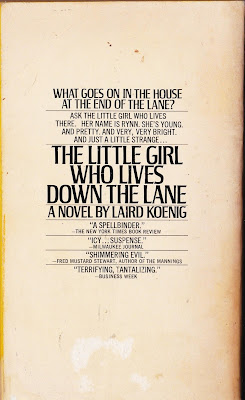 The little girl is Rynn Jacobs, almost 14, and she's English so she doesn't celebrate Halloween. She and her poet father having been renting their small home in a small New York village. Won't surprise you to learn that Rynn is wise beyond her YA years, who loves the enigmatic lines of Dickinson, the glorious piano of Liszt, and her pet rat Gordon. She hates the shrieking girls her own age on the bus, their trashy teen hearthrobs, and especially the Hallets, the family from whom her father is renting their home.

Frank Hallet first shows up to visit Rynn's dad and to explain Halloween tradition as his two children are making their way to the house. Everything about the man seemed soiled, shiny or red, he reeks of sweet cologne and he giggles. Right away you just know he's a fucking creep. And you're right, especially after he learns it's Rynn's birthday as well.


"Pretty girl like you—on your birthday and all—no boyfriends?" The girl and her pet, in a world together, closed out the man....
Suddenly the man reached down and slapped the girl on the curve of her buttocks. Rynn wheeled around to face him, her eyes glaring hate. Hallet giggled nervously. "It's okay. I get to spank you. On your birthday you have to get spanked..." Rynn's green eyes held the man's until he slid his glance away. "It's a game," he protested. "A birthday game!" His voice was loud and shrill. 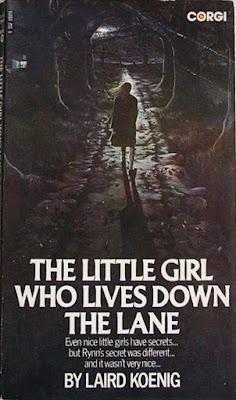 Sweet Jebus. Arriving the next day is Frank's mother, the imperious Mrs. Cora Hallet, an old woman with Barbie doll hair, who can't stand what she sees as Rynn's rudeness; the two of them get into an argument over jelly glasses and furniture that's been moved; everything goes downhill from there. Mrs. Hallet declares she is on the school board, and why isn't Rynn in school, where is her father...? All that jazz. She threatens Rynn with reporting her truancy, demands her father call as soon as he can—Rynn tells her he's in New York seeing his publisher—and is off. Rynn is terrified of exposure till she learns the truth of Mrs. Hallet's threats the next day.

Rynn, whose father is always working on either his poetry or translating others' and so we don't meet him face-to-face as he is not to be disturbed, is self-possessed and no-nonsense about taking care of herself and her home. We follow her into town where she runs grown-up errands to the bank, the hardware store, and her favorite: the bookshop. She stands outside it


...studying the shiny jackets of masses of books on display as eagerly as a starving urchin might stare into a bakery window, she was postponing the ultimate happiness, the moment when she would actually set foot inside the bookshop. Then she would be in a world she felt was far more wonderful than Alice found down the rabbit hole or the astronauts discovered out in the black vastness of space. 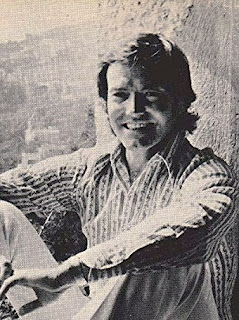 Two other characters feature in the tiny cast: police officer Ron Miglioriti, who might possibly or possibly not be trouble (he is the law after all), and young teenage magician Mario Podesta (who is actually Officer Ron's nephew), who uses a cane to walk and dons the garb seen on the cover. Both offer to Rynn sympathy and warmth, the former as a father-figure and the latter as a boyfriend (details of which are handled tastefully, gaze averted). Both treat Rynn with respect and a sense of equal standing; something neither Hallet is able to muster.

Rynn enlists Mario to help cover up a certain unfortunate incident, and their back-and-forth dialogue is a perfect snapshot of kids-against-authority, Mario the small-town kid trying to hold his own with cool, collected, sophisticated Rynn (she has traveler's checks! knows poetry! can cook better than his mother!). And it's this unfortunate incident that befalls Mrs. Hallet, and of course what happened to Rynn's father and mother, that power the engine of this little thriller. Koenig's style is subtle but sharp, with that mainstream narrative slickness that I feel good TV writers possess.

A hallmark of every creepy kid is the ability to outsmart adults; Rynn is no exception, even if she's not creepy. But as the novel tightens its grip, the giggling Frank Hallet proves to be more serious danger than bothersome neighbor, and he even comes to admire her: "I mean you're brilliant. No two ways about it. But you made one mistake." Isn't that always the case? But as Rynn's missing-in-action father had told her once, "Do anything you must, fight them any way you have to. Survive," we know that when we reach the final page, that instinct will be tested... 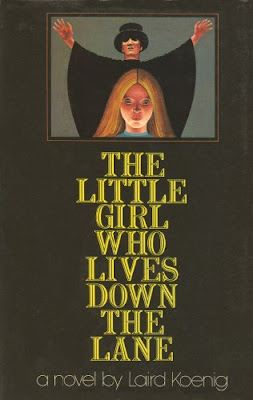 While it's certainly no must-read, Little Girl is crisp and bracing, like a brief autumn after a blistering summer and just before a blizzard; a minor work of its day that I read in a day and a half. I wouldn't call it a horror novel, maybe let's say it's horror-adjacent, as there are murders and secrets and other illicit behaviors. The backstory about her family is presented without ambiguity; I feel a stronger writer could have imbued her situation with perhaps more menace or atmosphere. Like other evil kids of the day, Rynn might be a budding sociopath, or she may just be taking her father's words about survival a tad too serious. Koenig keeps the action cozy in this little village rental home, venturing out rarely for, as Dickinson said and Rynn knows all too well, "I don't go from my home, unless emergency leads me by the hand." Indeed. Rynn protects what is hers; intrude upon it at your own peril.

Posted by Will Errickson at 5:48 PM 5 comments: