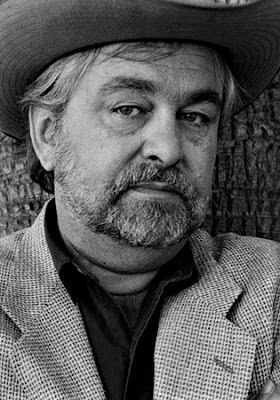 Author and editor Dennis Etchison, whose finely-wrought, enigmatic tales of psychological horror were some of the best of the 1980s, has died at age 76. Born in Stockton, CA, he had deep roots in the genre and was mentored by writers like Ray Bradbury, Charles Beaumont, and George Clayton Johnson. Etchison didn’t set out to be a horror writer. He has been referred to as a writer of “dark fantasy” or “quiet horror,” and in an interview with journalist Stanley Wiater in the book Dark Dreamers (1990), the author states that he found himself in the horror genre “sort of by accident.” Etchison began writing and publishing science fiction stories in the 1960s, but as the market for short genre fiction changed, he found his work gained more acceptance in the burgeoning horror fiction field of the 1970s. 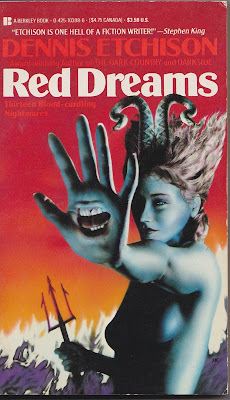 Etchison is perhaps best described as a horror writer's horror writer: while prolific, he never achieved mainstream name recognition, but he was very highly respected by virtually every other horror writer working in the '80s and '90s. I discovered Etchison while I was still in high school with a copy of Red Dreams given to me by an aunt who also enjoyed horror paperbacks. However I was more taken at the time by his editorial skills; his 1986 anthology Cutting Edge was filled with mature, challenging, utterly weird and sometimes graphically violent stories by some of the best writers working then. Later I would become enamored of Etchison's unique talents when I read his first short story collection, 1984's Dark Country. 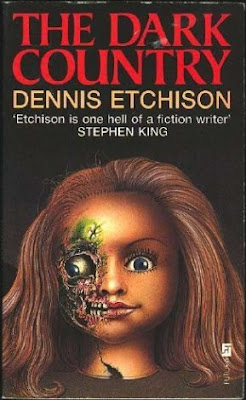 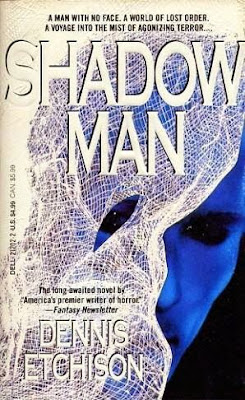 Etchison wrote novels like Shadow Man and California Gothic for the Dell Abyss line. A lifelong movie buff, Etchison studied film in college, and later produced many novelizations for horror films, including several Halloweens, Carpenter's Fog, and Cronenberg's Videodrome (under the pseudonym Jack Martin, which was also the name of one of his recurring protagonists). He assisted Stephen King with film references in King's classic 1981 nonfiction study Danse Macabre. His expert editorial skills were seen again in Masters of Darkness (1986-91) and MetaHorror (1992). 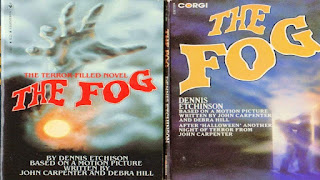 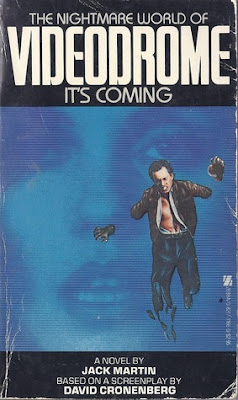 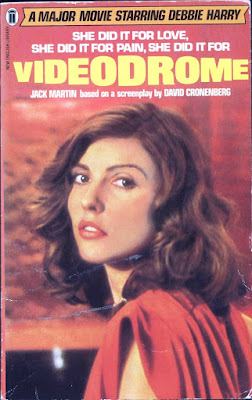 In the early 1990s Etchison was president of the Horror Writers Association. In later years he continued to write and adapted Rod Serling's original Twilight Zone scripts into radio dramas. Often nominated for various genre awards, he won many for his short fiction, and in 2016 was given the Lifetime Achievement Award by the HWA. He was also, going by the remembrances on social media, a heckuva guy who will be much missed by the horror community. 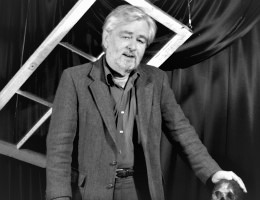 Email ThisBlogThis!Share to TwitterShare to FacebookShare to Pinterest
Labels: dennis etchison, other stuff 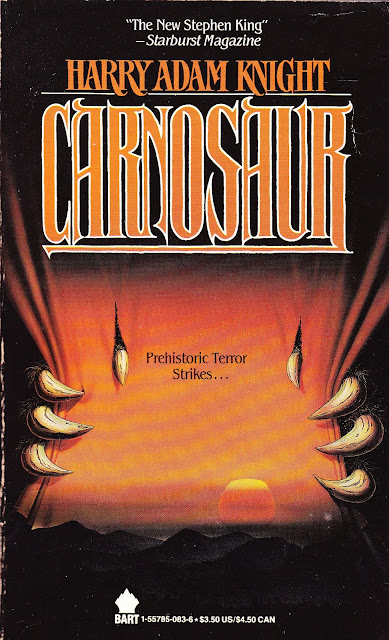 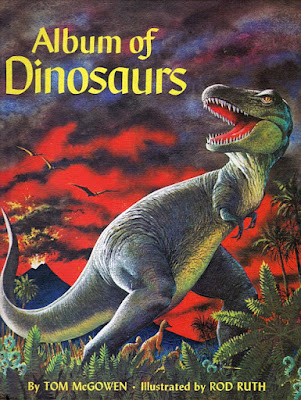 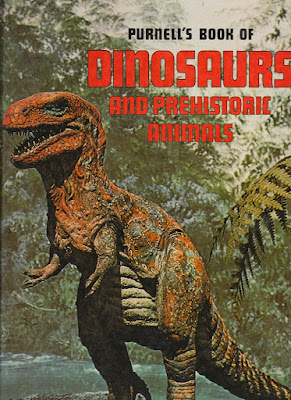 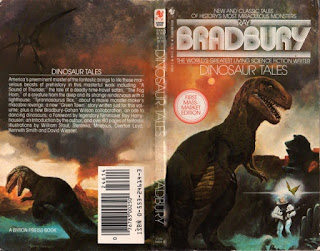 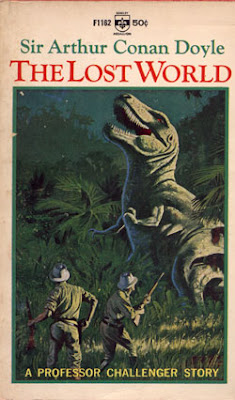 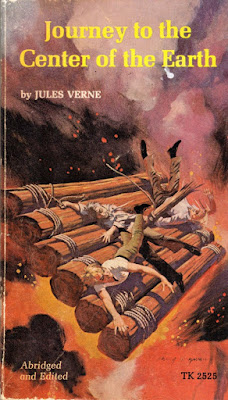 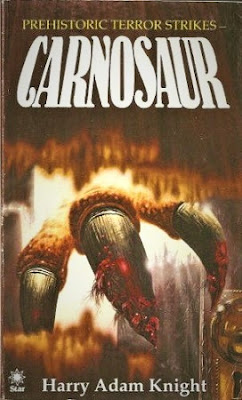 Harry Adam Knight was a pseudonym used for a small handful of pulp novels by John Brosnan (sometimes with the assist of Leroy Kettle), a prolific Australian author who also wrote nonfiction genre studies. A fleet-footed, old-fashioned thriller with plenty of gore, in the tradition of James Herbert, Carnosaur (Star Books, June 1984 UK/Bart Books, Feb 1989 US) is as solid a trashy paperback horror novel as one could want. Knight ticks all the boxes and doesn't muck about with the unnecessaries.
This is pulp horror done right: mean, nasty, brutish, and short. Sometimes every character is so glum and rude you kinda think, Jeez, doesn't anyone have a nice polite word to say? Everyone's all Johnny Rotten all the time. Kill the lot of 'em. Unpleasant, ungrateful, folk fodder for the dinosaur. Right... now. 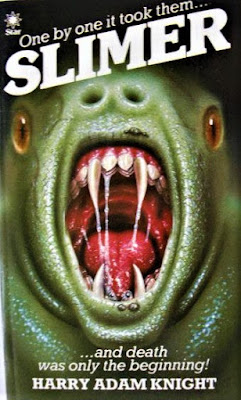 Our tale begins at 2:17 a.m. sharp when a poultry farmer is woken by his wife ("fat lazy cow" he thinks. See what I mean? What a turd) because their chickens are squawking up a ruckus. Of course, you're reading a book called Carnosaur so you know what's about to happen when Rudie McRuderson goes out to investigate. And it does.
Then the action switches to two teens doing it in the backseat and it's more of the same, with some class-consciousness woven in as British pulp fiction seems to always do: "She'd been flattered to have been picked up by someone who was so upper-class. Well, sort of upper class." 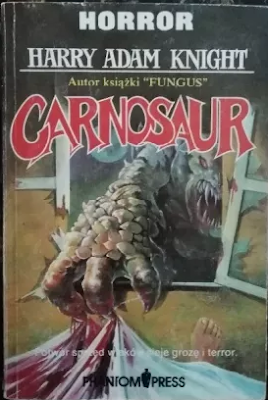 Daytime: David Pascal is a late 20s guy working as a "journalist" at a newspaper that's barely a newspaper in the small English town of Warchester, "where nothing exciting ever happened." He's just dumped his wonderful girlfriend, a coworker named Jenny, because of his dreams of leaving for a job on a Fleet Street scandal rag. Who knows when that'll happen since those papers keep ignoring his applications.
So here Pascal is, still working on a paper that's practically a local business flyer and having awkward moments with Jenny in the office. But you're reading a book called Carnosaur, so you know that Warchester is gonna offer up something soon that Fleet Street dared never dream. 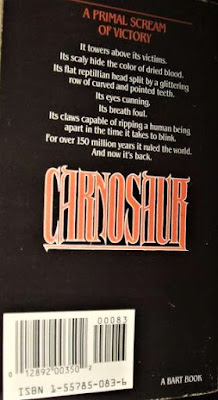 Sir Darren Penward (erroneously referred to as "Sir Penward" throughout the novel) is Warchester's wealthy eccentric, the big-game hunter with his own personal zoo on his vast estate, filled with exotic and dangerous animals—including his ravenous nympho wife, Lady Jane. But again, you're reading a book called Carnosaur, and you know that Warchester will soon be under siege by animals much more exotic and dangerous than *yawn* tigers and panthers.
The police begin their investigation, and "Sir Penward" blames the attacks on an escaped Siberian tiger. Pascal suspects a cover-up, and along with a reluctant Jenny, begins some investigation of his own. This leads him into the clutches of Lady Jane (aka Lady Fang, and looking "like something out of The Story of O"), well-known amongst the locals for her penchant of seducing younger men while her husband tends to his menagerie. Pascal realizes he can use her to get inside the zoo to peek around. That can't be a bad idea, can it? 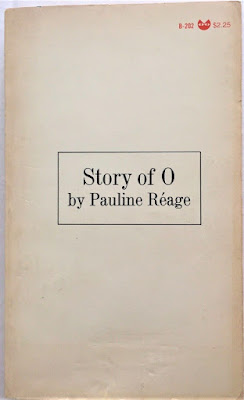 Pascal has a confrontation with Penward in which all is revealed about how these extinct monsters are suddenly alive again: the painstaking genetic process that the obsessed Penward explains almost like a Bond villain, which leaves Pascal muttering, "Incredible. Chickens into dinosaurs." Brosnan's science when it comes to dinos sounds pretty spot-on to me from what I recall of more modern paleontology books, and the distinction between dinosaurs—terrestrial prehistoric creatures—and other ancient reptiles will prove more important than anyone but an actual scientist could imagine. But you're reading a book called Carnosaur so that shouldn't surprise you.
I don't need to rehash the rest: Brosnan does nothing new with the plot—but that's entirely beside the point. This baby zips along with a confident rhythm and pacing precisely because the author doesn't try to add new twists or turns to his narrative (indeed I could have done with less "You've got to believe me, dinosaurs are in the streets, there's no time to explain!" but that is to quibble). Pulp is, in essence, comfort reading. 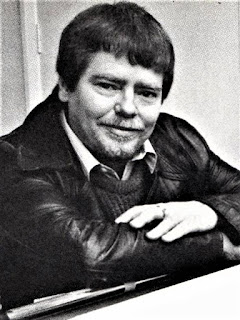 Okay, okay, I'm getting to it: the "carno" part of the title. Well, gentle reader, you won't be disappointed. The residents of Warchester—the ones still alive—woke up to a world that was vastly different to the one they'd gone to sleep in. Brosnan serves up the grue that satisfies. Behold: Tarbosaurus, a T. Rex in everything but name, wreaks delightful havoc wherever it goes; Deinonychus, with its scythe-clawed foot that it uses like a prehistoric exponent of Kung-Fu, guts hapless farmers and other locals from neck to groin; and a plesiosaur joins a boating party that none of the invitees will soon forget: After a long, stunned silence a man's voice said, with an edge of hysteria to it, "Well, you've got to say one thing for good old Dickie; he sure throws a hell of a party..."
Brosnan doesn't quite take it to ridiculous Dinosaurs Attack! levels, but pulp fans should still have plenty to chew on. Sex, violence, nerdy dino facts: Carnosaur has it all. 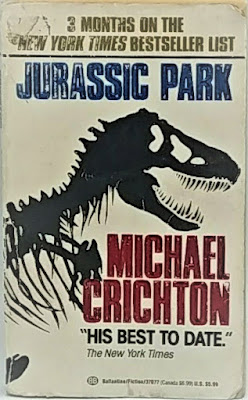