Lovecraft's Legacy, ed. by Weinberg & Greenberg (1990): A Debt No Honest Man Can Pay 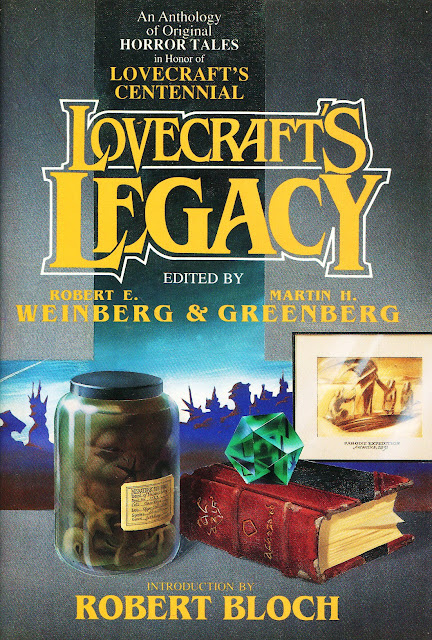 What creative artist doesn't enjoy the opportunity to speak to those who inspired them, express their gratitude, and perhaps even engage in some flattering imitation? That's the impetus behind Lovecraft's Legacy (Tor hardcover, Nov 1990/St Martin's trade paperback 1996, cover art by Duncan Eagleson), an anthology celebrating the 100th anniversary of his birth. A baker's dozen of authors of various genre backgrounds contribute their literary thank-you notes (literally too in short afterwords appended to each story) to one of the most influential authors of the 20th century. I think one can state that pretty unequivocally these days, right? In the quarter-century since Legacy was pub'd, HPL's rep has grown to, well, cyclopean proportions, so... fuck it, yes one can. 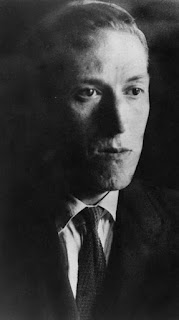 After an introduction by Robert Bloch, who as a teen corresponded with HPL (but you knew that), Mort Castle roars out of the gate with with the excellent "A Secret of the Heart," the narrator of which relates how he's made himself immortal thanks to the "Other Gods" revealed to him by his physician father over 100 years before. When the family's beloved adopted daughter succumbs to a gruesome painful death aged only 11, the father resorts to drinking and traveling far and wide, dabbling in black arts to ease his grief. Castle wrote one of my favorite horror stories, Still Dead's "Old Man and the Dead", and "Secret of the Heart" features the same kind of literary in-joke. What Castle does when he links a character to another fiction is especially apt and unexpected; the circle is complete, a circle I think Lovecraft would've been too humble to include himself in. 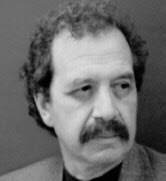 What about mixing up the highest of Elizabethan high culture with works almost forgotten in the grotty pulps of pre-WWII era? The reliable Graham Masterton presents us with "Will," a terrific little mashup of the Bard of Avon and the Gentleman from Providence: it seemed as if Shakespeare had achieved his huge success as a playwright by striking a bargain with 'Y'g Southothe,' which was some kind of primeval life force 'from a time when God was not.'" You can bet this reward comes at a price. Masterton's uses real Shakespeare history, of course, and some bold imaginative origins for the Globe Theater and the fire that destroyed it to create one of Lovecraft's Legacy best stories. 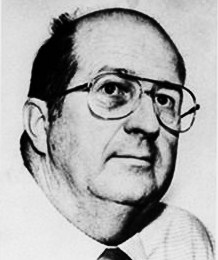 A highly-respected author of literate and challenging science fiction, Gene Wolfe (pictured) contributes "Lord of the Land," which contains some startling imagery deployed in a Faulkner-esque piece about a scholar's interview of a country patriarch for stories about the mythic "soul-sucker." What connection does it have to pre-Greek gods and rites? Hungry jackals, moonlit cities, starry alien skies, and mouthfuls of worms lend their welcome Lovecraftian flavor. The science fiction of Brian Lumley's "Big 'C'" brings to mind the Quatermass stories of the '50s and '60s and conflates one big C—cancer—with another you can probably guess. Not too bad, as Lumley has a hale, chummy style, and gets the humor in his gross, somewhat silly apocalyptic scenario.

Chet Williamson's "From the Papers of Helmut Hecker" is an epistolary piece about a snobby literary writer whose work keeps getting compared to Lovecraft's, which enrages him; he's the heir to Kafka and Borges, winner of the Booker Prize and Faulkner Award! Poor guy gets what's coming to him. "The Blade and the Claw" from Hugh B. Cave is set in Haiti, so it's nice to get out of the usual environs, but I found the story lacking in Lovecraftiana, and its happy ending dampens the horror. 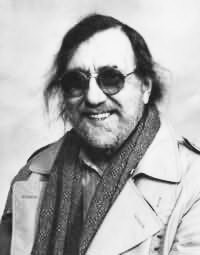 "Meryphillia" was easily my favorite tale in Lovecraft's Legacy. She is "the least typical ghoul in the graveyard," pining for a poet who visits this charnel yard to sing odes to his unrequited love. It's a tale of love and glory, of midnight feasts and the stench of decay; Brian McNaughton (above) writes with a noxious, devilish wit, regaling the reader with a Clark Ashton Smith-style bit of grave and grue, recalling HPL's own "The Hound" or "The Tomb." It's sweet, funny, gross, completely satisfying. I must have more McNaughton! And I kinda hope there are more stories of Meryphillia and her "coffin-cracking jaws."

Gahan Wilson's "H.P.L." is the most affectionate story included, a charming trifle of the writer still alive at nearly 100 and how he got that way. A fellow pulp scribbler visits Lovecraft at his home in Providence, and today he's a successful author living in his upkept childhood home that boasts an enormous two-story library. Wish-fulfillment at its finest—what HPL fan would not want to peruse that man's book collection? You'll be able to tell where Wilson's going but it's a worthwhile trip just the same.

Crime writer Ed Gorman delivers a killer serial killer tale, "The Order of Things Unknown," written in  no-nonsense prose and tersely invoking a "vile god" and a burial ground for sacrificial victims. Quite good; I'm gonna have to look into Gorman's crime novels I think.

He stood as if naked in the moonlight and looked up and saw the moon and the stars and sensed for the first time that beyond them, somehow, there was another reality, one few ever glimpsed, one that filled early graves and asylums alike.
When he put the girl in the trunk, he was careful to set her on the tarpaulin. She had begun to leak. 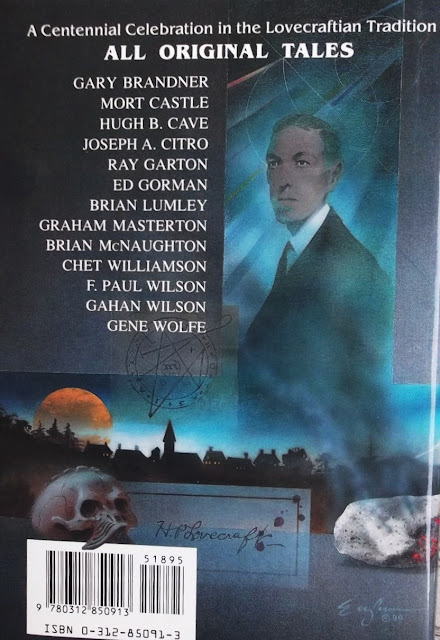 The anthology closes with F. Paul Wilson's "The Barrens." Wilson wisely utilized the mysterious wilderness of his native New Jersey's Pine Barrens, into which the narrator and an old college friend venture so the latter can explore the legends of the Jersey Devil, and perhaps more. Strongly in "Colour out of Space" mode with a welcome lack of garbled phonetics, Wilson's rather pedestrian prose isn't up to the task of imbuing those dark forests and empty landscapes with dread or weirdness. He reaches for it, it's a good story, but it didn't quite get there for me; no frisson of Lovecraftian (or Blackwoodian) menace. Obviously the editors thought highly of it, and I've seen it referenced elsewhere. Maybe it's just me...

Lovecraft's Legacy is an easy recommendation: only a small number of stories are below par; a solid many are quite good, and three or four are terrific and deserve to be included in future Lovecraft anthologies not consisting of original material. Mythos fans probably already have a copy but if not, go for it. I got the hardcover as an Xmas gift back in the godforsaken year of 1990 and had only ever read a couple stories in it. Never got rid of it and so this scary solstice season I'm glad I finally went back!

Posted by Will Errickson at 9:10 AM 6 comments:

Who's Afraid of Virginia Woolf 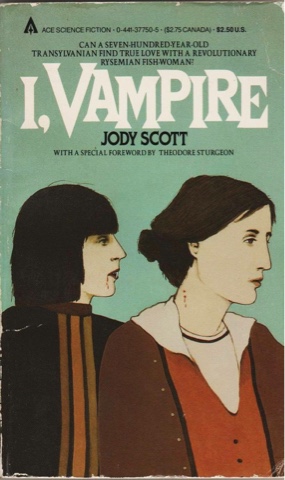 Posted by Will Errickson at 4:35 PM 3 comments: 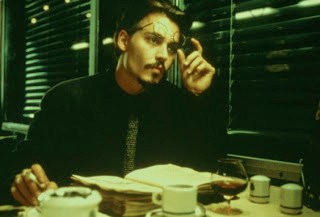 These sound familiar to anyone?

1. From probably 1960s and certainly not newer than 1972ish. The cover art had a pair of women's (I think) shoes and the shoes had scary, moaning faces.

2. Something to do with a nightmare and a haunting. It has three golden monsters on from '91 and it looks like a apple paper back or an Avon but it's not. I think a character's name is little Jack.

3. I thought it was called "Little Angel" or a variant thereof. I remember the cover was an illustration of an innocent-looking little boy, around 10 years old, sitting next to a broken birdcage with feathers and blood all over the place. And he's got this "Who, me?" expression on his face. It was a rip-off of "The Bad Seed," and concerned an evil little psychopath boy, around 10 years old or so, who lived with his parents. His mom spoiled him rotten, but his dad suspected that he might be evil. Of course, nobody believed him. I remember the little boy tries to kill his aunt at one point by throwing her off a cliff, but she's hanging on for dear life and somehow manages to attach herself to the side of the cliff with her belt. And the little boy is bitching that she spanked him for wetting his pants when he was younger, and how much he wants her to die. She survives, but her arm is all bruised and dislocated from hanging onto the cliff for so long. Then his teacher ends up with a broken arm because he bum-rushes her on the playground and knocks her onto a pile of gravel. The dad tries to talk to her about the incident, and ask if she suspects his son, but she thinks the boy is innocent and he's crazy. The dad and the aunt team up to stop the boy, much to the mom's chagrin. But then the mom somehow gets on the boy's bad side and he tries to kill her, too. But the dad somehow stops him, and I think he accidentally kills the boy. At the end, the mom lays dying in the hospital and gives her blessing for the dad to marry the aunt, because she knew all along that they were more well-suited for each other. I used to love reading this trashy pulp novel, but I lost it a long time ago, and I'd love to figure out what it was called, and maybe read it again. Found! It's: 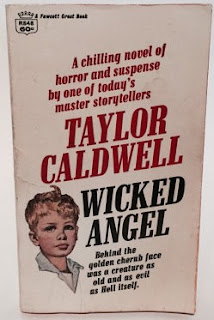 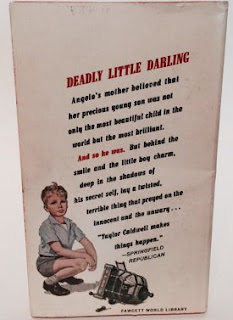 4. The book is set in a psychiatric hospital for the criminally insane in a very cold region of America where a new doctor is trying a new form of treatment for a particular patient. This patient was guilty of a series of murders of women where he strung them up and basically bled them dry, possibly showering in their blood. He is heavily medicated but the doctor thinks that he can "get through" to him by cutting his medication. The book basically goes through flashbacks showing how the killer developed into what he is and introduces characters and sets up future confrontations between staff and patients. In the end the patients revolt and escape setting up a chase between the main good characters and the main bad characters in a violent snowstorm. As I mentioned, I cannot remember the name of the book but it may have had "Snow" or "Winter"in the title, but I can't say for sure. Found! It's that perennial used paperback I see in virtually every used bookstore I visit but have never read: 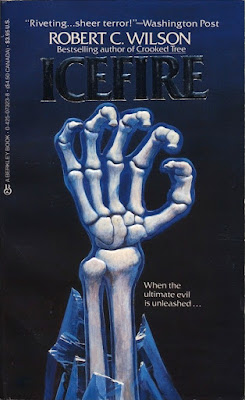 5. I read a book in which the one of the main characters in this short story collection, I believe i remember this correctly, fell in love with a sheep. There was another story that involved necrophilia. There was nothing graphic or gross. Instead, it was this amazing depiction of loneliness. I think it took place in big sky country, maybe Nebraska.  Found! It's: 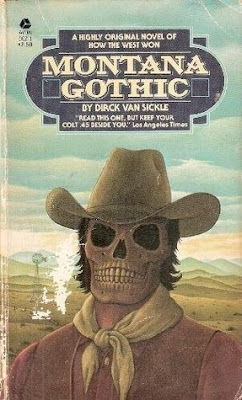 Posted by toomuchhorrorfiction at 10:48 AM 13 comments:

Like It Was Written in My Soul from Me to You 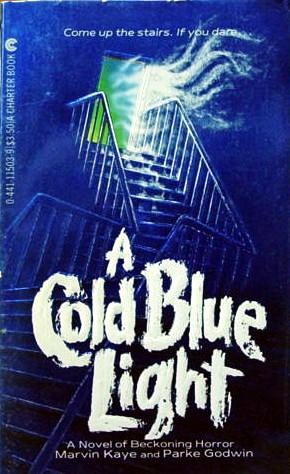 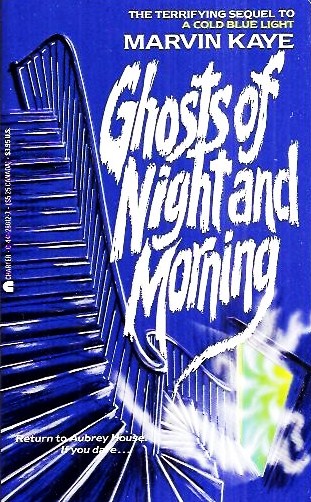 Posted by Will Errickson at 3:14 PM No comments: 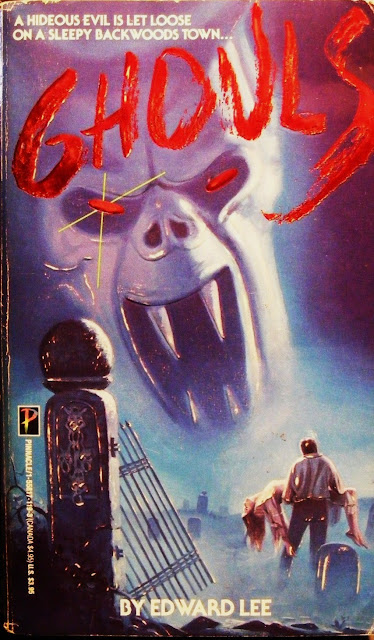 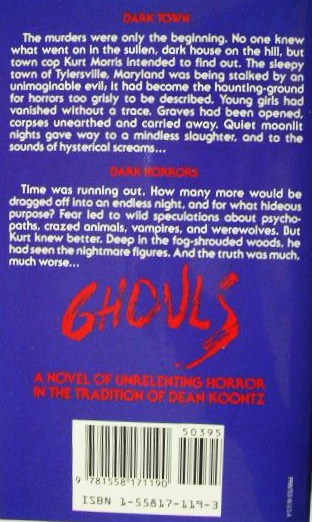 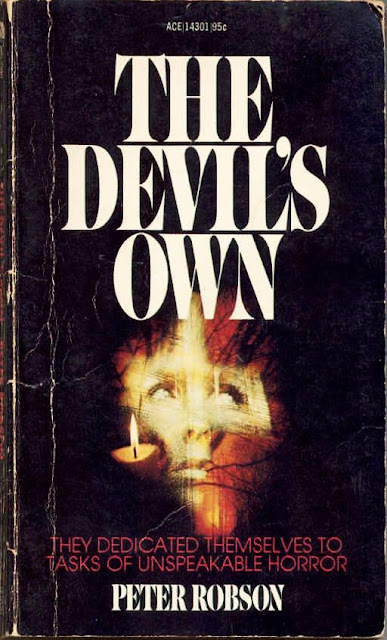 Posted by Will Errickson at 2:03 PM 2 comments: 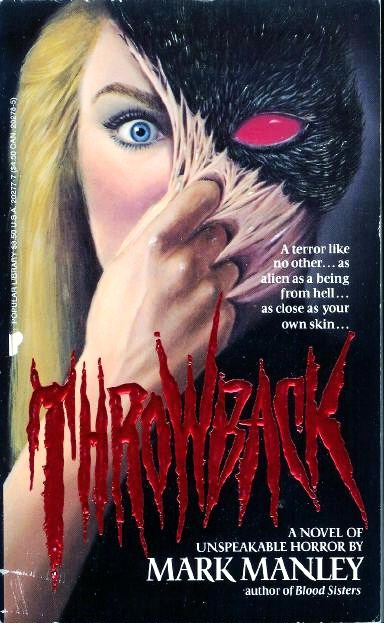