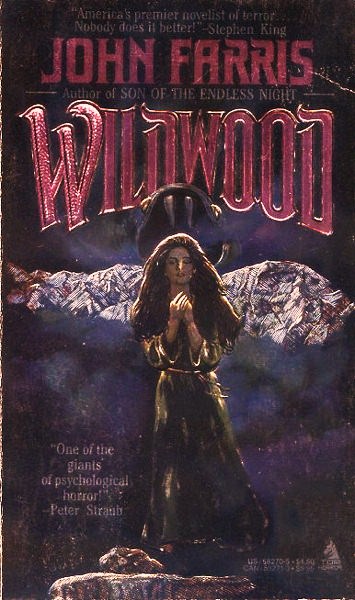 There is cosmic weirdness galore, fantastical creatures from mythical history traipsing through a Southern forest lost in time and space, and some fascinating characters, but very little true horror in Wildwood (Tor/August 1986), a weighty novel from genre giant John Farris. One of his many works from publisher Tor, they did a spectacular job with Farris's books, and Wildwood is no exception: dig that moody eroticism of the cover art (no artist credit given) reptilian fangs and silvery glow, so '80s! And that imagery is straight from the story; snakes and ladies, kind of a Farris thing. I've got a fair collection of Farris novels, and two of them, All Heads Turn As the Hunt Goes By (1977) and Son of the Endless Night (1986) are two of the most satisfying horror novels I've read for TMHF. I was psyched when Wildwood got off to a mysterious, intriguing start, hunters chasing strange quarry through that treacherous wood; could this be another Farris classic?

A North Carolina forest on the Tennessee border, Wildwood is deep, dark, and foreboding, traversed by only the most experienced of outdoorsmen (and, we'll see, outdoorswomen). Set in 1958, there is a backstory from half-a-century earlier; Farris moves well between eras and characters with consummate professional skill. This back-cover summation does well enough to entice the potential reader, but doesn't capture the depth and knowing subtleties that are the hallmarks of the author's style, his easy ability to get into the nitty-gritty of his characters hearts and minds. There is the father-son relationship between divorced Whit Bowers and 15-year-old Terry, who lives with his mother, a bestselling author, in Paris. Then there's the respect between Whit and Arn Rutledge, a gruff, macho sort who served under Whit but, you know, that was years ago in WWII; things have changed, perhaps. Between Arn and his Cherokee wife Faren, an uneasy marriage. The turn-of-the-century characters, pseudoscientific scholar Edgar Langford, his wife Sibby, and the architect who is designing Langford's ambitious estate, James Travers, a dark love triangle that teeters not just on the edge of morality but also on the space/time continuum itself. 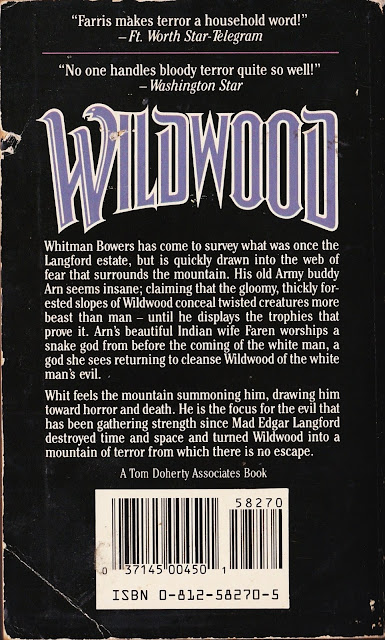 An example of Farris's sensitivity to human relationships is the friendship the builds between Faren and Terry. Whit and Terry come to stay with Arn and Faren as Whit enlists Arn to show him Wildwood and what remains of Langford's estate, now a local piece of legend and spooks. Terry and Faren go off for a drive to the reservation town to sell some of Faren's art and then take a break by a stream. Of course Terry is crushing hard on this beautiful, open, smart, exotic older (well, 30s!) woman, and Faren is impressed with Terry's maturity and cultured manner (ritzy schools in France will have that effect). Lazing about in nature of an afternoon gets them feeling very comfortable with each other. Nothing untoward happens, but it is addressed:


"I know, I know," she murmured.
"You're such a good-looking boy; and I do have a sweet tooth for you. We could get each other stirred up here and now. But Terry, what that does, believe me, just leaves good hearts full of trash. I want my heart to go on feeling kindly, with friendship for you that'll last forever. Understand?"
He nodded. More relieved than disappointed.

Man, that's good, that's real, that's true. Other aspects, particularly the bits about Langford's penchant for ancient Babylonian mystical texts and Tesla's bizarre silver-spun perpetual-motion contraption held in a dome above the estate, were solid reading. I dug the adventures in the Wildwood forest; the descent into a subterranean lair; the space-time continuum inside-out and destroyed; the hybrid humans known as Walkouts flung from natural biology the night of Mad Edgar's Revels; the appearance of everyone's favorite cult inventor Nikolai Tesla in a small yet important role; the illicit romance between the brilliant architect of Langford estate and Langford's wife: all of this told in an adult, engaging manner. Earthy imagery predominates, with an emphasis on the human body and a nightmarish bestiary of half-man/half-beasts, the origin of which is Mad Edgar's thirst for vengeance (One character notes "his brilliant scholarship, his foolish intrusions into magick, his dark vendettas, his romance with old and dangerous gods" and I'm all like, COOL MORE PLEASE).

Also: lots of talk of genitals and bodily functions; however it's not a juvenile sort of obsession, more of an adult acceptance of such. This grounds the narrative, as does Arn's threatening masculinity, his temper flares; he's a believable character even as he chases unbelievable beings (you can see one of them on the cover of the New English Library paperback below). The trials and tribulations of the Native community are depicted with respect. Farris's writing is always strong, readable, original, so I was kept glued to the page even while the horrors I kept expecting to appear remained aloof. Ah well. Wildwood I suppose is more of a dark fantasy, the kind of book I associate with Robert Holdstock, perhaps; not a genre I read much if any in. I'm not used to my fiction being populated by pretty girls with butterfly wings who speak in an Irish brogue and flutter about the forest naked. A bit coy and corny for my tastes. 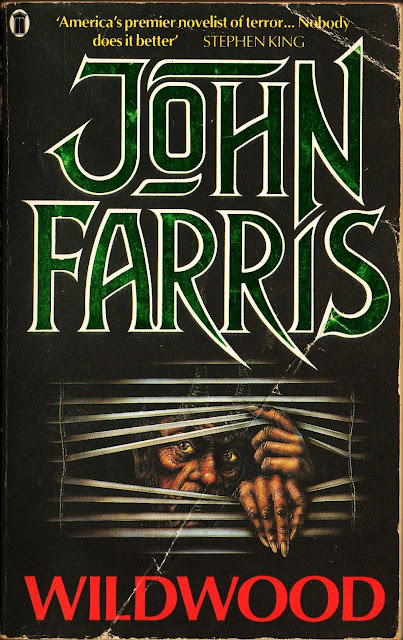 
Bunches of dappled diamondback pied snakes, some nearly six feet in length and thick as a man's wrist. Some earthy, some ashen, a few with the liquid darkness of eels, all heatless as death. Writhing snakes in the hands of preachers, his stomach plunged to the level of his knees and he gasped in shock...

The problem is that, for as evocative and precise and meaty as Farris's writing is, for all the narrative and character heft that promise epic thrills and terrors, he's left out one key component of story-telling: suspense. Surprising, right? I was more than half through when I realized we weren't getting much of anywhere. Page after page of intriguing set-ups and scenarios but no tautening of the threads that bind them. My attention was drifting as the climax approached, Farris beginning to weaken to overwriting as he constructs an epic '80s conflagration: ...a moment of writhing, a silvery pop, a thousand insignificant serpents, then nothing buoyant impulses of light, all going their separate ways... pathways to blue oblivion... The wind was a lash, a beast, a wailing, a remonstrance, an outpouring from the deep-set caverns of time and space. 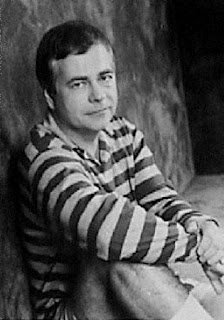 Wildwood has much of what I've loved about Farris's books before, but it's missing a vital component I can't quite place. Lack of suspense, lack of deep-rooted conflict, lack of a certain je ne sais quois. That said, I found the final page and-a-half an effective scene of calm and acceptance after the storm, an upbeat but hard-won bit of otherworldly knowledge for a character who maybe should have been the protagonist in the first place. But that would be a different book, and honestly: probably not one I'd read. You can see I'm unsure what to make of this novel!

So I can kinda sorta recommend Wildwood, if you appreciate dark fantasy more than I do I guess, but what I can recommend heartily is this: a one-of-a-kind TV commercial for the novel featuring Zacherle. Yes it's true. Behold:

Posted by Will Errickson at 7:57 AM 6 comments:

His Scalpel Kills the Worm 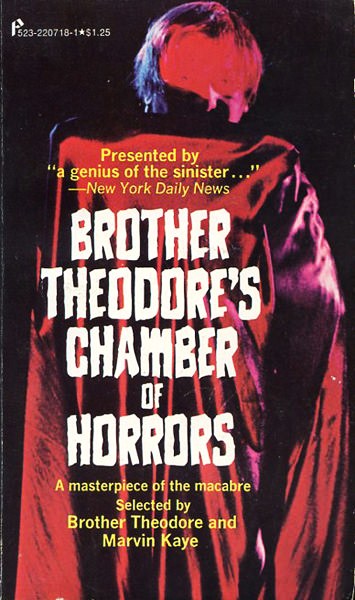 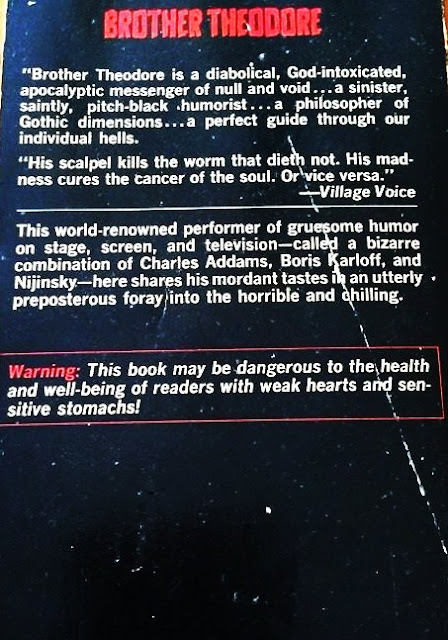 Posted by Will Errickson at 10:51 AM No comments: 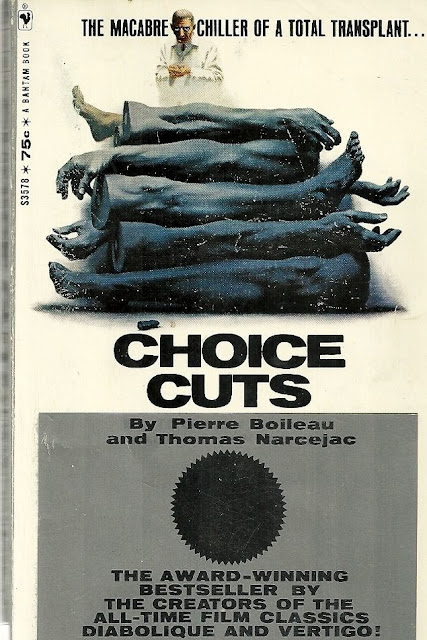 Got to love a pile of severed limbs! Added this one to my to-read list but the 1968 Bantam paperback is going for collectors' prices and I refuse to pay that. So who knows... 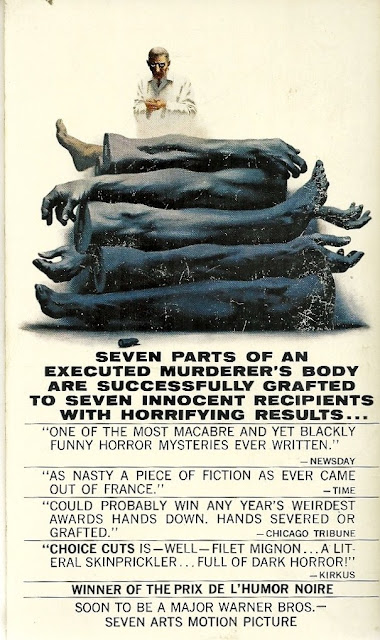 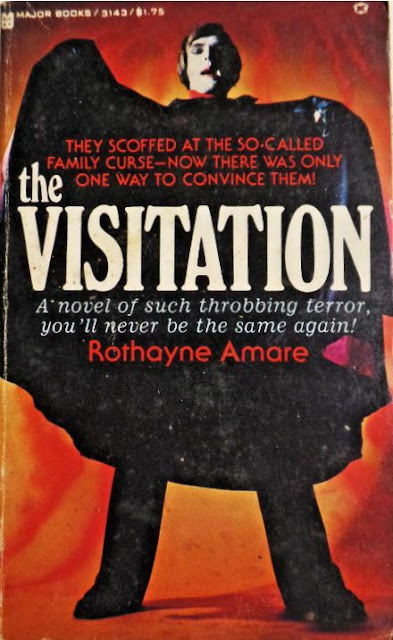 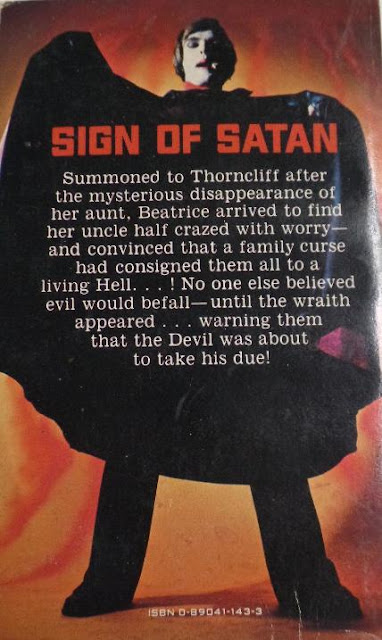 Posted by Will Errickson at 9:13 AM 2 comments:

At Five O'Clock They Take Me to the Gallows Pole 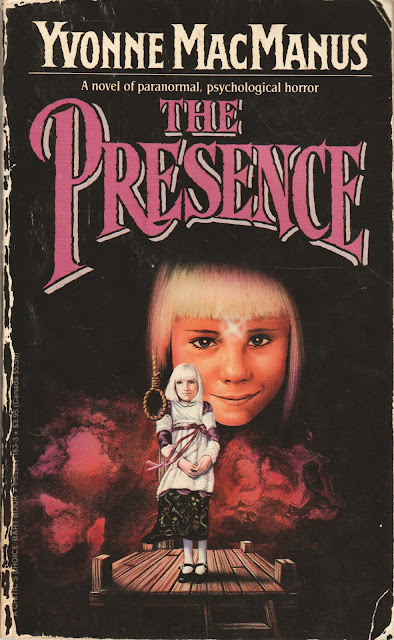 Posted by toomuchhorrorfiction at 11:00 AM No comments:

Lies That Life is Black and White Spoke from My Skull 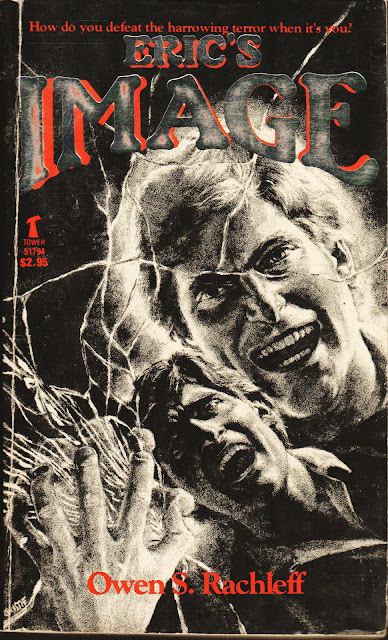 Posted by toomuchhorrorfiction at 11:10 AM No comments: 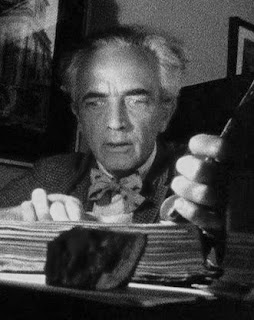 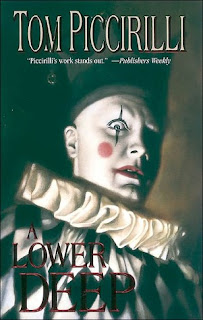 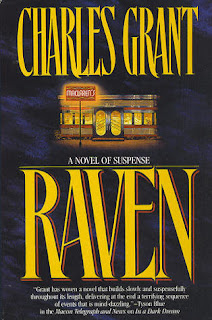 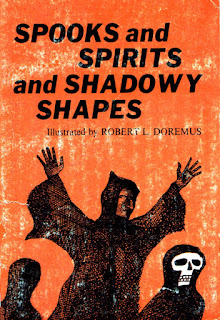 Posted by toomuchhorrorfiction at 10:04 AM 8 comments: 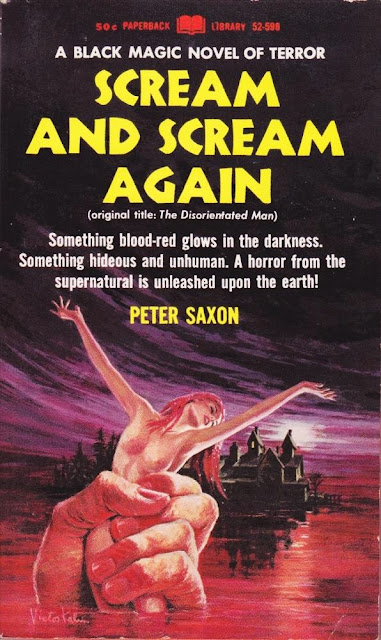 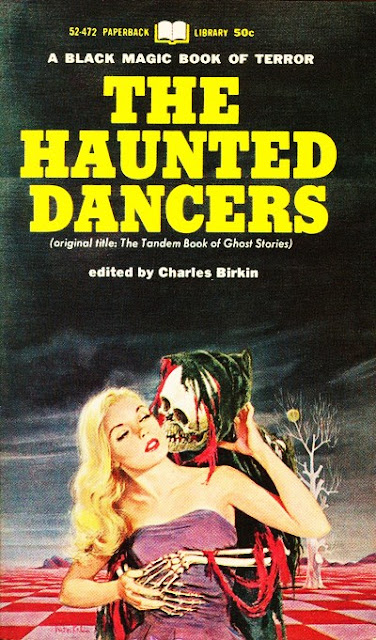 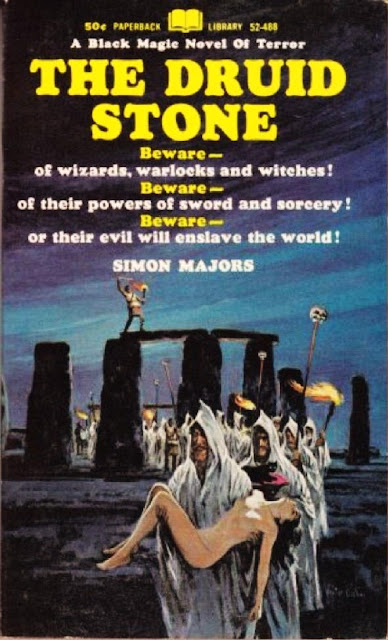 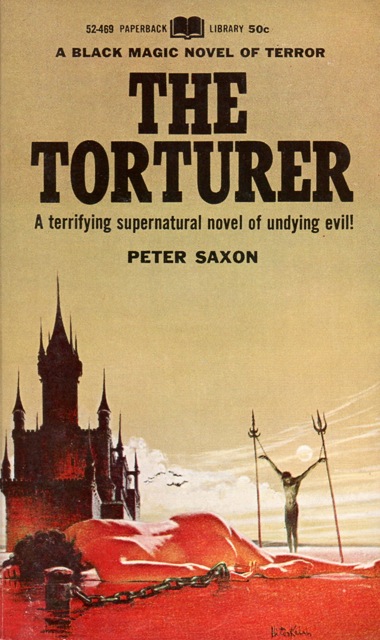 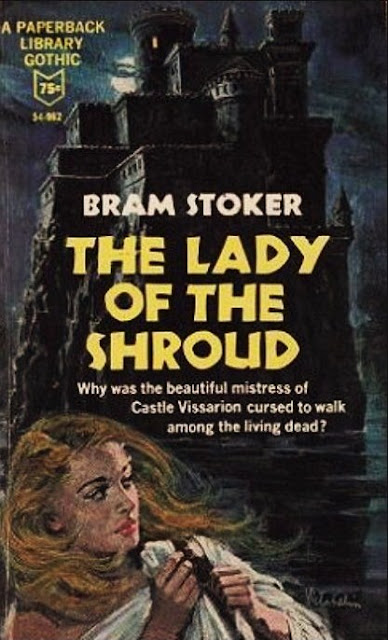 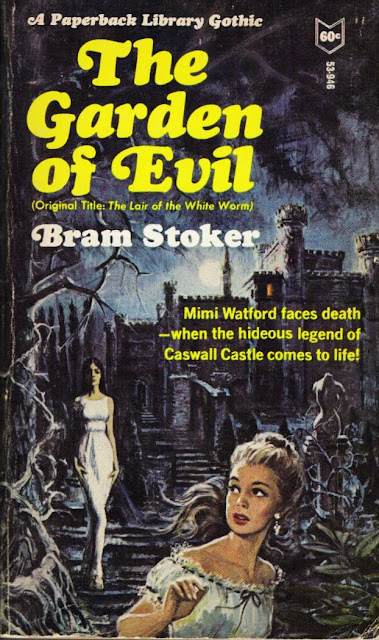 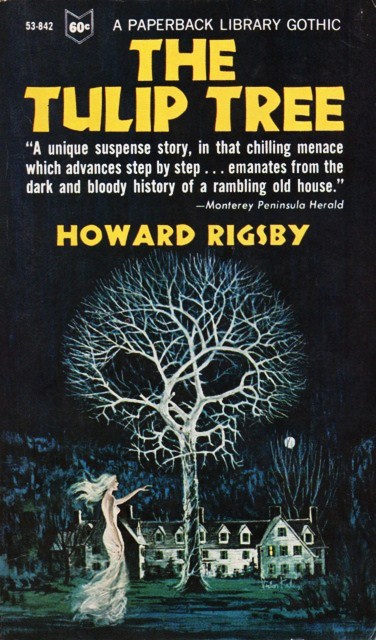