Twelve Tales of Suspense and the Supernatural by Davis Grubb (1964) 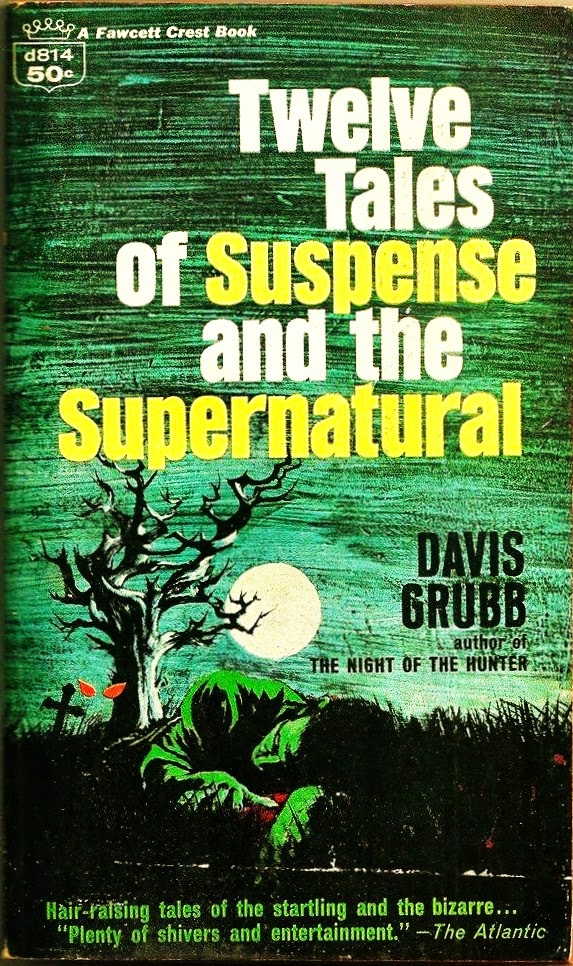 Known for penning the novel The Night of the Hunter upon which the classic 1955 movie was based, Davis Grubb (1919-1980) was a West Virginia native well-versed in the pride, poverty, tribulations and superstitions that were endemic to that region. This collection of short stories ranging over 20 years, Twelve Tales of Suspense and the Supernatural (paperback edition from Fawcett Crest, June 1965) includes some Weird Tales works as well as tales first published in popular magazines like Ellery Queen, Nero Wolfe, Woman's Home Companion, and Collier's: you know, all the middlebrow publications of the mid-century that your great-grandparents might have read of a TV-less evening (Cavalier too, but that was probably Grandad's privy reading). 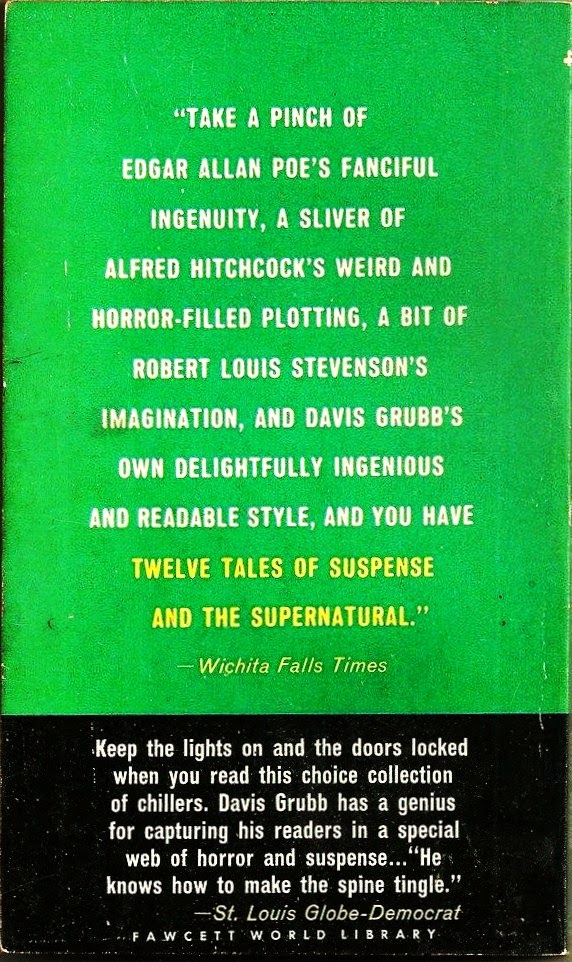 Grubb's style has a slightly melancholy, forlorn (the variant "lorn," which I have never come across before, appears in places) note to it and his scenarios are decent time-passers, characters familiar: drawling ne'er-do-wells, laconic sheriffs, expansive judges, tempting women, shrewish wives, innocent children, cool killers. The aptly-titled "Moonshine" got me thinking of those Gold Medal paperbacks from the 1950s of Southern sleaze and backwoods ribaldry. That sensibility is everywhere, but not overwhelming; I wouldn't really call it Southern Gothic, but there is just a hint of it at the edges. 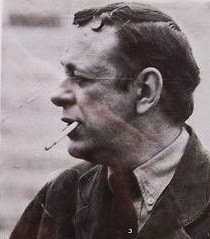 While reading these stories I couldn't help but think of Grubb's contemporaries in short genre fiction. While his stories aren't quite as sensitively-wrought as Charles Beaumont's or as matter-of-fact believable as Richard Matheson's, as cold and cruel as Shirley Jackson's, Twelve Tales still has appeal. Readers fond of Fredric Brown and Gerald Kersh, two other unclassifiable writers whose fiction has strong echoes of crime, science fiction, suspense, and horror, should take note as well. 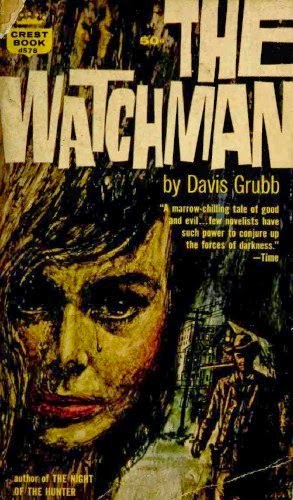 Most stories end with a ingenious image of violence, perhaps that's even the tale's raison d'étre, but we all know this is the pulp template. Nothing cuts too deep or too sharp, but you can see the bone in "One Foot in the Grave" and "The Horsehair Trunk," two good and grim revengers that echo Robert Bloch's punning but without that author's black humor. "Busby's Rat" and "Radio" could have served as minor entries in Ray Bradbury's October Country, and "The Rabbit Prince" is at once sad and sweet as a spinster schoolteacher is given a glimpse of wild abandon that could have come from his pen when he was feeling kinder. "Nobody's Watching!" is set in the high-tech world of TV production, and it's the kind of thing I could imagine Harlan Ellison writing about his early days, the dangers of the mediated image on the human mind... and body. 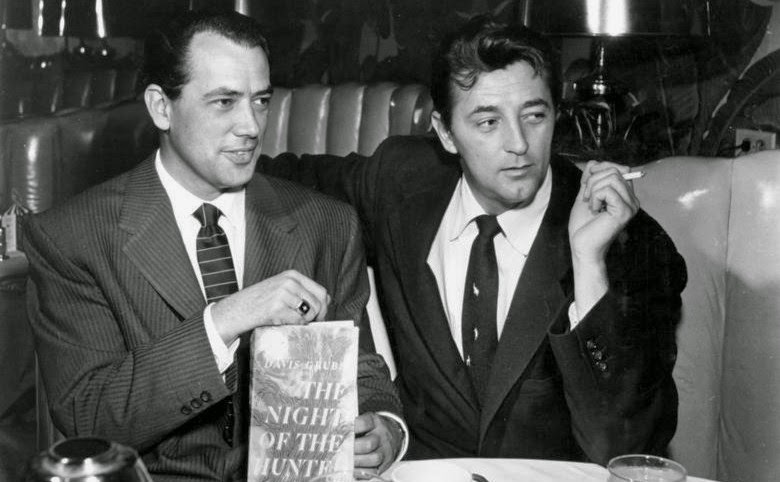 Hangin' with Bob Mitchum in the '50s. Lucky!

Orphaned children populate several of the short stories; of course endangered siblings form the crux of Night of the Hunter (which, goddammit, I must read!). Grubb has a particular sympathy for them--as who wouldn't?--but he doesn't present them mawkishly as a lesser writer would. "The Blue Glass Bottle" highlights how children misunderstand the grownup world about them. "Murder. It was a word. You heard the men say it at Passy Reeder's Store. Murder. It was black marks on the colored poster at the picture show house where the man clutched the red-haired girl by the throat." Grubb's writing shines here, with a slight To Kill a Mockingbird vibe, and the final lines quite affecting.

One of the oddest stories is "Wynken, Blynken, and Nod," which evokes the famous child's rhyme to a macabre end. You may find the reveal a tad ridiculous but it's handled nicely: "There is a moment--perhaps two--in the lifetime of each of us when the eye sees, the mind recoils, and all conscious thinking rejects what the eyes have seen." You might even think of Daphne du Maurier. 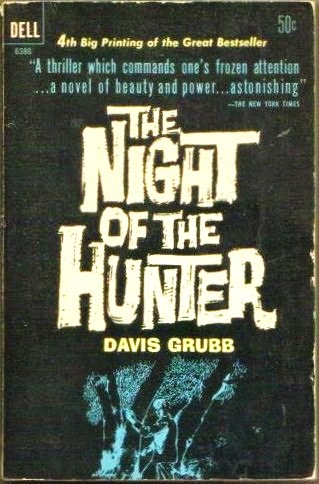 Grubb can imbue a phrase  like "not so much as a single scratch" with the most unsettling of implications. That's from "Return of Verge Likens," one of my faves, two brothers who react quite differently to the murder of their father. It was self-defense! claims the killer, and the cops agree. Too bad the man who did the deed was Ridley McGrath, "the biggest man in the whole state of West Virginia! Why, don't Senator Marcheson hisself sit and drink seven-dollar whiskey with Mister McGrath in the Stonewall Jackson lobby very time he comes to town? Don't every policeman in town tip his cap when Mister McGrath walks by?" 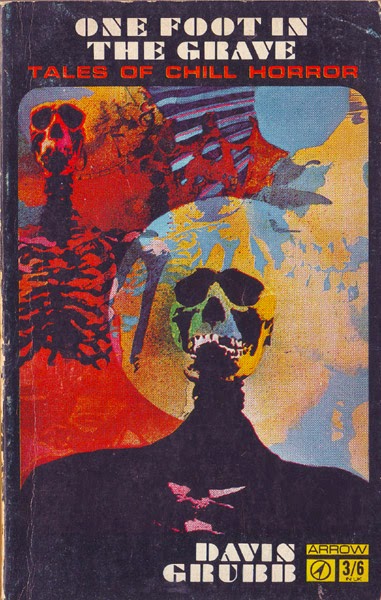 The collection concludes with the "Where the Woodbine Twineth," which was adapted for an episode of "Alfred Hitchcock Presents" and included in Peter Straub's excellent anthology for the Library of America, American Fantastic Tales (2010). A little girl whose parents have been killed now lives with her father's sister Nell, who will not tolerate any dreamy foolishness from her new charge (all probably the fault of her brother's "foolish wife"!). Young Eva natters on about the "very small people who live behind the davenport," you know, Mr. Peppercorn and Mingo and Popo! Aunt Nell will have none of this, but when Captain Grandpa or whatever his name is arrives on a steamer from New Orleans with a Creole doll for Eva, things get interesting. Despite the use of an unwelcome (but context-accurate) racial slur, "Woodbine Twineth" ends on a clear, classic, sparkling note of pure unadulterated horror.

Twelve Tales offers old-fashioned pleasures for genre readers; not a classic by any means, but I think a handful of stories--generally, the last half of the book--are  worth checking out. There's nothing as terrifying as Robert Mitchum lurking inside with love and hate tattooed on the knuckles of his hands, but then again... I'm kinda relieved there's not.

Great piece on this collection, one that I might rate just slightly higher than you, given that you regard it as "not a classic by any means"...I'd argue that it certainly borders on it, at a minimum. Unfortunately but like many writers, it seems, his later short fiction was not up to the standard of this first collection. While I've not yet read The Siege of 318: Thirteen Mystical Stories, I have You Never Believe Me and Other Stories and whatever elements were present to make his first collection so remarkable (several of which you examine), they are largely absent in You Never Believe Me.

I hear Centipede is coming out soon with a HC reprint of THE NIGHT OF THE HUNTER...I will likely pick that one up, as while I've seen the film, I'm embarrassed to admit I've never read Grubb's source novel.

Grubb is fantastic, ain't he? When you were listing contemporaries, you left out one that I always connect him to: Manly Wade Wellman. I still haven't finished my copy of Twelve Tales, it's one of my prized paperbacks.

"The Horsehair Trunk" was made into an episode of The Night Gallery entitled The Last Laurel. Pretty good if I remember. Love your blog by the way.

You will love the dark classic Night of the Hunter when you do finally get around to reading it Will. I had a pb copy with a great spooky cover illustration that i read in my formative years and it was one that really sucked me in, being just out of the bounds of childhood myself at 12 or 13 it had quite an impact!

I wish I still had that copy, I'm thinking the illustration, by it's style was an Avon or Ballantine printing from the late 60's -early 70s done in a painterly watercolor-like medium with the preacher man's looming form, and elongated arm reaching out to snatch the kiddies as they ran through barren woods in the background. But dont quote me on that! lol

highwayknees, sounds like this is the edition you're describing:

NIGHT OF THE HUNTER is one of the best horror novels ever written.

"The Return of Verge Likens" was also done by the Alfred Hitchcock Hour (not AH Presents, which were 1/2 hr shows), starring a young Peter Fonda, also George Lindsay (Goober" on Andy Griffith) as a heavy.

I picked up this very edition at a used bookstore not long after finding a hardcover edition of "Night Of The Hunter" at an antique store. Both were solid reads. The Wellman comparison Adam makes is spot on. Laughton's adaptation of "Hunter" is, for my money, the finest cinematic adaptation of a novel (particularly a horror novel) I've ever seen and one film that never loses its first-viewing freshness. Nice piece.