Ariel by Lawrence Block (1980): Mommy's on Pills, Baby's Got the Chills 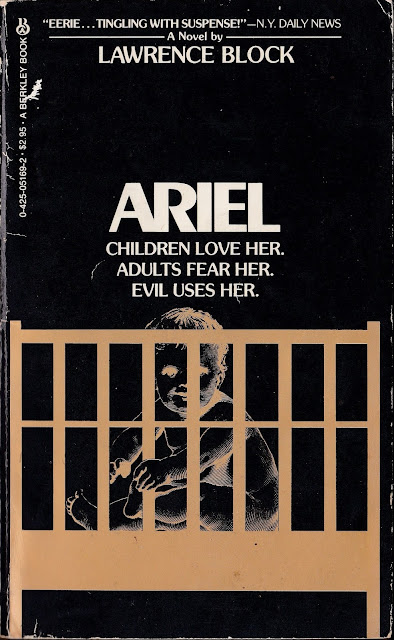 Slowly and magically, like trick photography in a television commercial, the baby's face lost flesh and turned to a gleaming skull. And the woman, too, was a bare polished skeleton wrapped in a shawl. And she drew away, the skeletal infant in her arms, floating through the closed window and out into the night.

Oh, what Zebra Books could have done with a book cover from that passage! Here's a paperback I bought on a whim at Powell's last year, despite its lackluster photo-negative cover art. Now that I've read the novel I see the image misleading and so is the stark tagline tapping into the always-popular "evil child" theme. That baby is a victim, not the perpetrator! Poor baby. 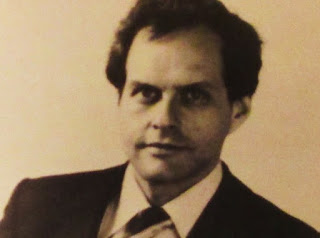 In the crime world, Lawrence Block (b. 1938, Buffalo NY) is a writing giant, with a career that reaches back to the pulpy paperback era of the 1950s. Over the years I've read a couple of his books featuring hard-boiled hard-drinking (or recovering alcoholic depending on which novel in the series one reads) NYC PI Matthew Scudder. They were solid, enjoyable reads—dark, melancholy, mortal—and although I'll read more, Block lacks a certain indefinable quality I like in my crime writers; his style didn't click with me in the ways that, say, James Ellroy, Elmore Leonard, Carl Hiaasen, James Lee Burke, or James Crumley do. Something ineffable is missing. 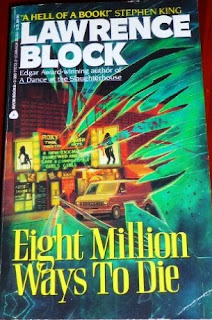 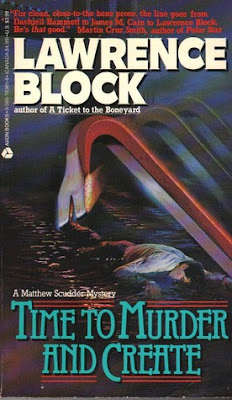 That's also the problem in Ariel, Block's mainstream 1980 thriller (Berkley paperback January 1982). Requisite parts are there for a terrific creepy potboiler: creepy kid(s), dysfunctional family, unaccountable death/accidents, even an decades-old framed portrait of a mysterious woman found in an attic that seems to mesmerize the titular character. However these aspects never gel into a seamless satisfying whole; Block plays it straight down the middle, never veering into exploitative pulp nor deepening into literate character psychology.

Roberta and David Jardell live in an expensive old home in tony Charleston, South Carolina, with their adopted 12-year-old daughter Ariel and newborn son Caleb. Despite living a charmed life, all is not well: since the unexpected conception of Caleb, Roberta has withdrawn from Ariel, who strikes her more and more as an unlovable, unfathomable child, somewhat wiser than her years. David is preoccupied with work and doesn't understand his wife's reluctance to mother Ariel now so he tries to connect with the girl, even while he comes to resent Caleb—because Caleb is not his child either, but the illegitimate offspring of Roberta's affair with slick family man Jeffrey Channing. 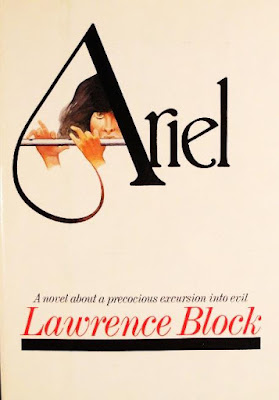 Roberta sees a ghostly woman in a shawl with a baby at night in her bedroom; soon she finds Caleb dead in his crib. Connected? That would be crazy. So she comes to reluctantly think Ariel may have had something to do with Caleb's death. She turns to her Valium, her therapy, and her lover Jeff Channing. Ariel retreats to her bedroom, confiding worldly thoughts and concerns in her diary and practicing her flute (a sound that drives Roberta to almost Lovecraftian madness: Ariel with her flute, a devilish smile on her lips. Followed now not by rats but by all the town's children, the innocent children, and all of them looked like Caleb, and—). The two regard each other warily in that old house, with David an unwitting referee.

Probably my favorite character was Erskine Wold, Ariel's school pal, a budding creepster and too smart for his own good, whose parents seem detached from his own life; he's constantly making suggestive remarks to Ariel, remarks his 12-year-old mind probably doesn't fully comprehend yet (he's also uncanny and shrewd: when Ariel asks him if he wants to have children, he replies "Are you kidding? Actually bring something into your house that's going to know what a total shit you are? That would be really stupid, Jardell.") Together they begin keeping an eye on Channing, who lives with his family in a nearby perfect-Charleston neighborhood. In turn, Channing begins keeping an eye on Ariel... 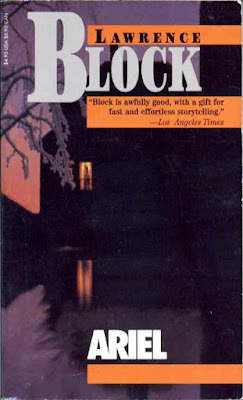 There are many good scenes throughout the novel, particularly one at Caleb's funeral, in which Block takes us inside the main characters' thoughts: Ariel sardonically notes Channing's "blank good looks..." He could be the master of ceremonies on a new game show: The Funeral Game—pick the right coffin and win an all-expense paid trip to Forest Lawn Cemetery. We also find that Ariel is, literally, gaslighting Roberta (or more accurately she's not gaslighting her—it's a pun that goes nowhere). There's a research run to a real-estate agent and newspaper offices, which I always like. For me, Block most times doesn't go far enough; Ariel lacks true psychological insight and a convincing portrait of obsession. The supernatural intimations remain only that: underwhelming, a dangling thread never tied up. 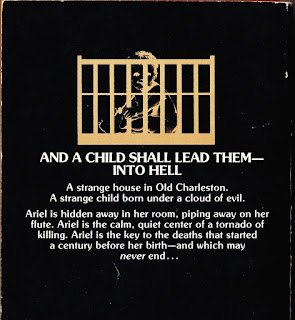 Aspects of better novels flit through Ariel: the quietly superb Elizabeth; the modern-South haunted house The House Next Door; the classic psych-thriller The Bad Seed. It's a decent book to pass the time, a mild TV-movie of the '80s kinda thing, but I think readers familiar with the other books in the creepy-kid/haunted-house subgenres will find Ariel too frustrating to frighten.

How Can I Understand the Flies? 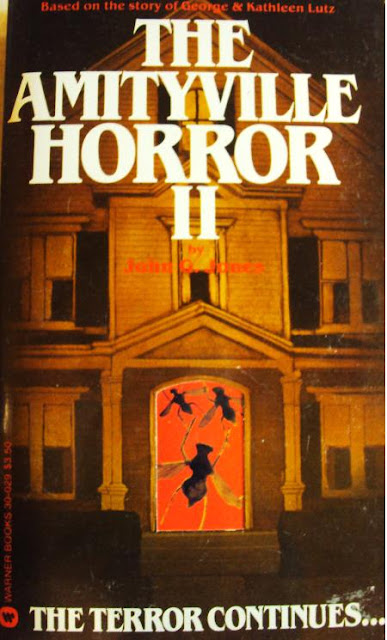 Be afraid. Be very afraid. Follow-up to the Anson original. John G. Jones continued writing Amityville novels even into the 21st century, if you can believe it. 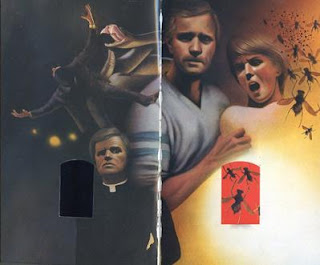 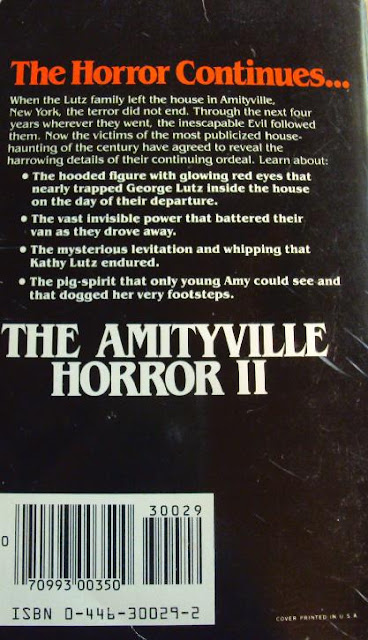 Posted by Will Errickson at 9:55 AM 6 comments:

And You Know What They Said? Well None of It Was True 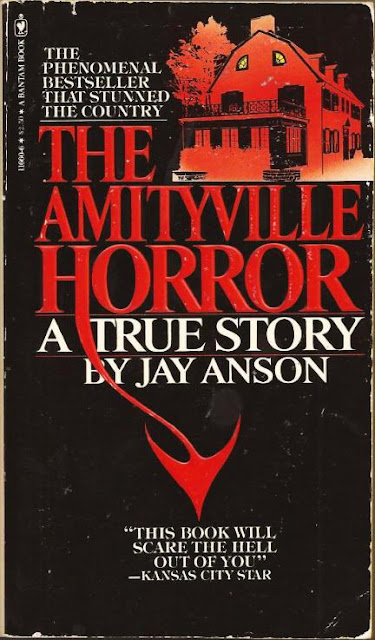 I agree that this one "will scare the hell out of you" as per Kansas City Star but like any rational sane person must disagree with that tagline "a true story." Yes, Ronald DeFeo Jr. murdered his family in the house at 112 Ocean Drive; the "supernatural" aspect invented by others remains a disgusting exploitative stain on an already tragic event. But that photo-negative of the house on the 1978 Bantam paperback is one of the iconic horror images of that entire decade, and I can't say it didn't terrify me as a kid. 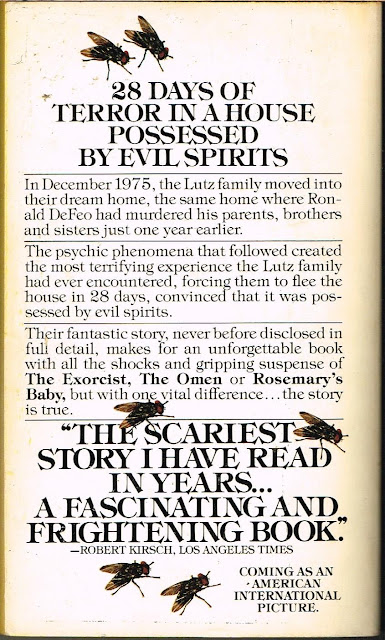 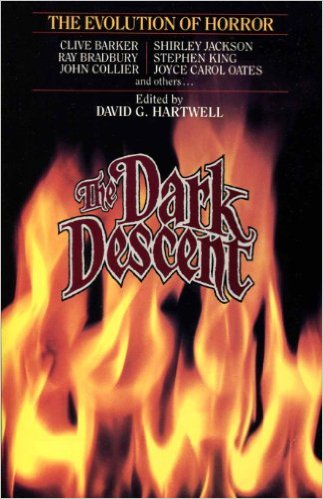 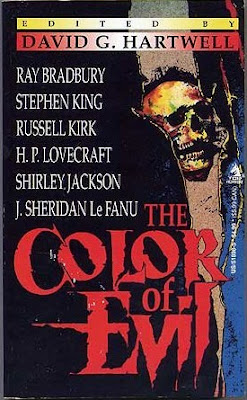 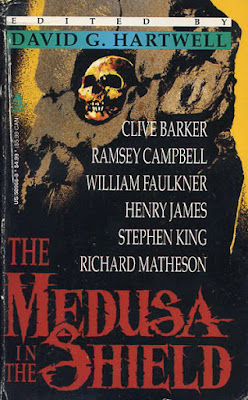 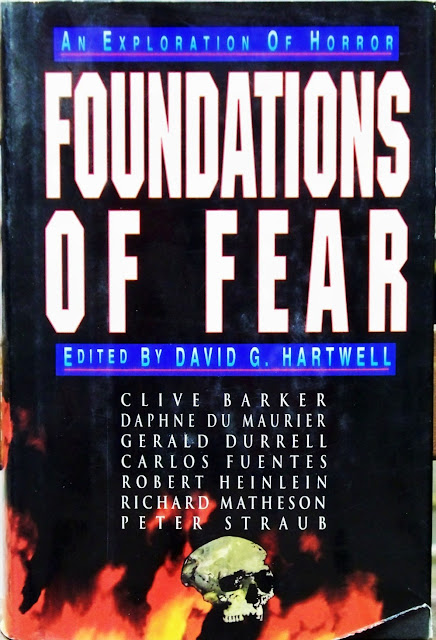 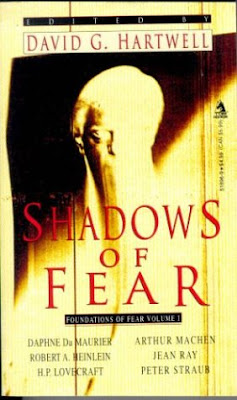 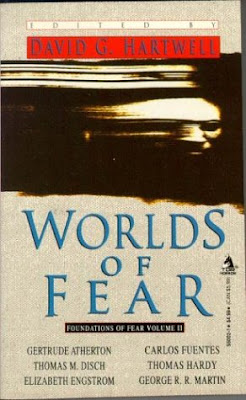 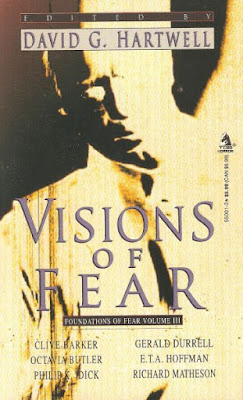 Posted by Will Errickson at 1:18 PM 4 comments:

Fell Right into the Arms of Venus de Milo 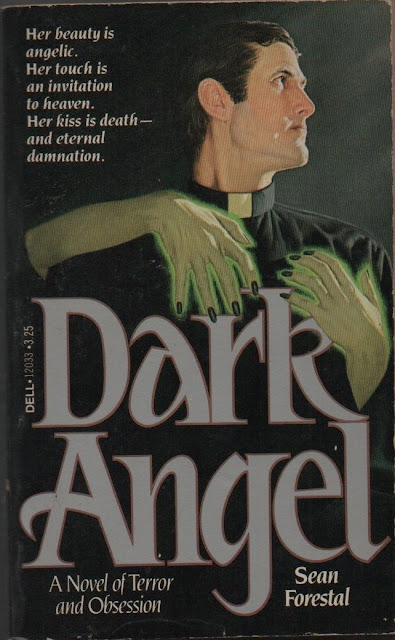 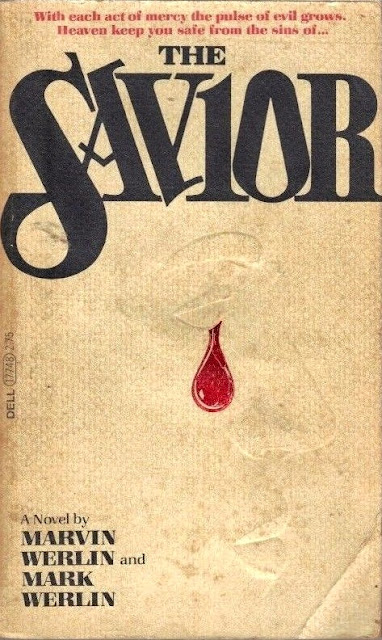 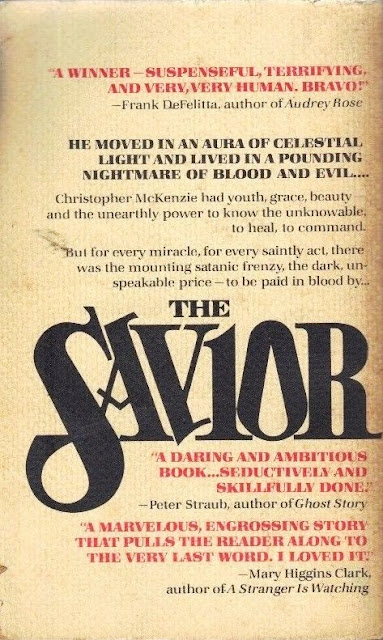 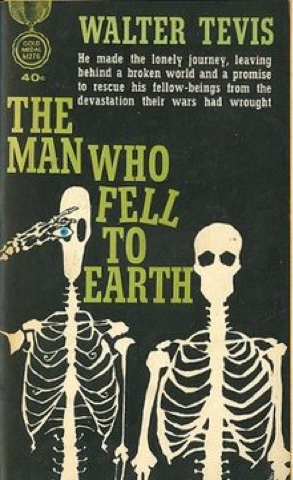 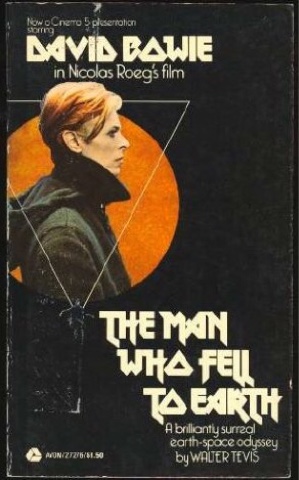 Posted by Will Errickson at 3:33 PM No comments:

Only the Echoes of My Mind 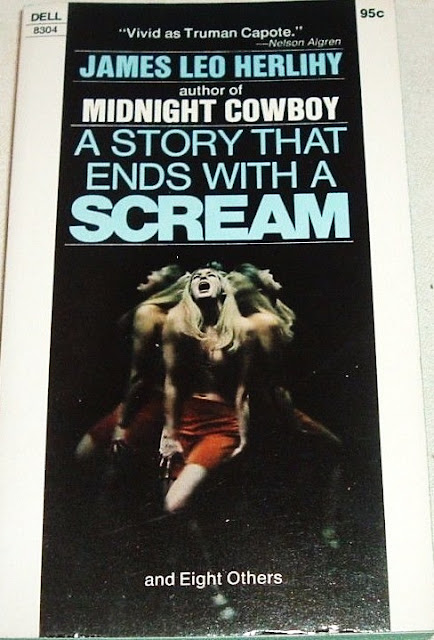 The Ghost Prince to Claim His Bride 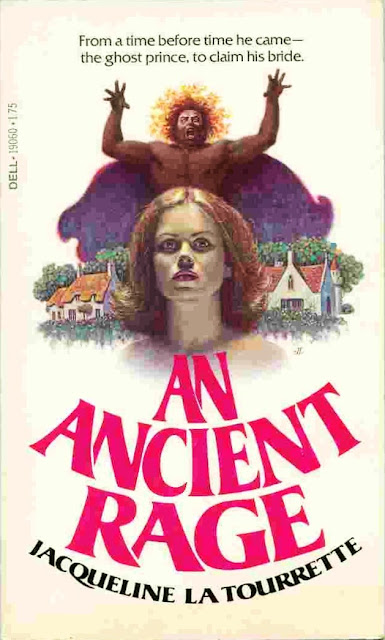 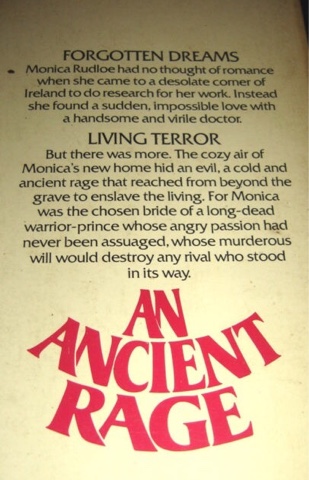 Posted by Will Errickson at 8:54 AM 2 comments: 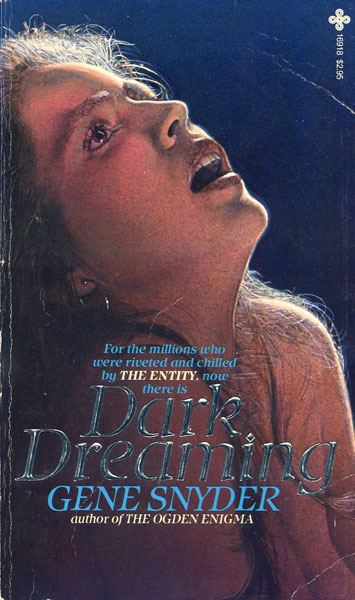 Posted by Will Errickson at 7:32 PM 3 comments: