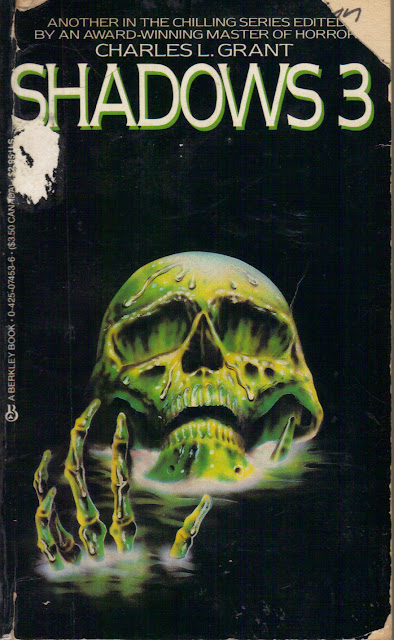 I am so glad that I continued to read all of Shadows 3 (Berkley Books Jan 1985), even when some of the stories were pretty underwhelming. Couple times I was about to put it back on the shelf half-read, but I bore on and was treated to "Cabin 33," Chelsea Quinn Yarbro's longish tale that ends the book. It is easily one of the best horror short stories I've read in ages. It's so wecomingly well-told, with a vivid sense of place - resort cabins in the mountains for vacationing folks with a little money to spend - strong, true dialogue, and characters given enough room to live and breathe (and die, of course). As editor Charles L. Grant writes in his little intro, "For those of you familiar with Hotel Transylvania, Blood Games, and The Palace... welcome to Cabin 33; for those who are not... read this first, then go buy the books." I can only hope her novels of the vampire life are as thoughtfully written and just fun to read as "Cabin 33." I think I can trust Grant on that. 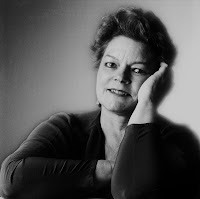 I cannot however trust Grant about Bruce Francis, a writer who apparently only ever published two stories: he states Francis has a long career ahead of him. Not with the frustratingly elusive and fractured short-short, "To See You With, My Dear." I felt like something's going on, but I - just -couldn't - grasp - it. Some nice imagery that I think was supposed to link together to imply... Lycanthropy? Dream transference? Psychotic delusion? Grrr. Same thing with Steve Rasnic Tem's "At the Bureau," a sort of eternal-recurrence riff that ends uneasily if vaguely. "Opening a Vein," from crime duo Bill Pronzini and Barry Malberg, is only a page long, jumping off with an I Am Legend-inspired pun to imagine a new genesis by a familiar demiurge. Mostly these were stylistic experiments rather than full short stories. 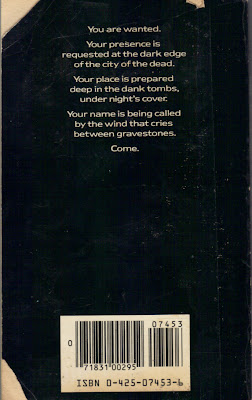 Onward: "The Partnership," from perennial William F. Nolan, is hokey and silly; next. Peter Pautz's "Ant" is another all-too-quiet, subtle story of an odd young boy's first experience of death, parental strife, and perhaps how the two are entwined. I preferred "Wish Hound," by science-fiction scribe Pat Murphy, which has a nicely nasty ending, and Ray Russell's "Avenging Angel," a black-comic revenge story about a particularly unlikable painter artiste. I really have enjoyed what I've read of Russell's work and really need to get a copy of Sardonicus, his 1961 modern-gothic story. "Tell Mommy What Happened" is Alan Ryan's little gem of dawning revelation, that moment when the seemingly inconsequential trivialities of everyday life open up unexpected vistas of horror. Aw yeah! 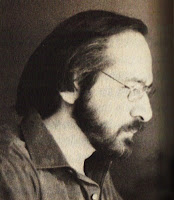 A pensive Grant.
But there is seldom a doubt that the shadow over there,
the one in the middle of the noonday desert,
doesn't belong.

Other good stuff: for fans of the politely told and old-fashioned tale of weirdness and mystery (literally Holmesian in one), there are "The Ghost Who Limped" by R. Chetwynd Hayes, "Janey's Smile" by Juleen Brantingham, and "The Brown Recluse," by Night of the Hunter author Davis Grubb. These are, along with "Cabin 33" and "Tell Mommy," the best in this volume, with carefully-chosen language appropriate for the subject matter. Hayes and Grubb are master craftsmen indeed. They also feature that sort of last-line climax so often seen in horror fiction, and I think they really work. 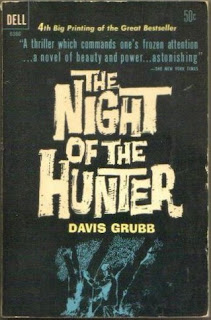 Altogether, Shadows 3 offers entertainments of the "macabre and bizarre," as the 1980 hardcover states. I don't want to say the stories are light-hearted, but they don't often seem to have that gravitas - or is it pretension? - that I see in short horror fiction later in the decade, when younger writers seemed more intent on disturbing and upsetting readers rather than providing them with cozy chills. Then again, I'd say there were more real writers working in the field in the '70s and early '80s, or there were fewer less talented writers being published (of course Grant would disagree with none of what I'm saying, I'm sure). The series is called Shadows, after all, not Wounds or Headshots or Guts. While the good writing is much appreciated, and the solid composition of the stories bespeak experience and skill, sometimes I like my horror fiction to cut closer to the bone, or engage the world at large, or aspire to bigger concerns than the simple formality of tales-well-told. These stories are like a bit of warm milk spiked with a only tiny splash of whiskey to help you get to sleep. 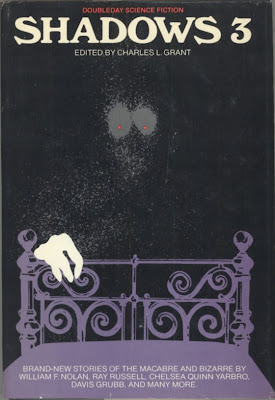 But it would really be unfair to criticize something for being what it is not; rather I should - and did - enjoy Shadows 3 for precisely what it is: mostly mildly satisfying short stories of the weird and the uncanny with occasional touches of excellence. It's not nearly as good as the first volume in the series, but I believe I will be dwelling amidst these Shadows for some time to come...

You can find Sardonicus in this collection, along with a number of unappreciated classics. Honestly, one of the best collections I've ever read for it's sheer breadth.

Those Marvin Kaye anthologies were awesome when I was a kid! I recently bought a batch of them from Amazon. I loved the Edward Gorey dust jackets. The stories within were amazing, a lot of older or obscure stories that would not show up in Years Best Horror or the Grant anthologies. I recall a lot of Isaac Bashevis Singer stories in them that dealt with witches and demons.

Adam, thanks! Actually I spent a chunk of this afternoon trying to find cheap copies of anthologies featuring Russell's story, and that was one that turned up. ISFDB is essential for that sort of thing.

Robert, I recall liking a Singer story in DARK FORCES.

I need to get this one still and several more of this series. I really want to read that Cabin 33 now. The stories in these collections do seem to be hit and miss, which is probably why I took a break after the first few I read. The little gems one can find, however, makes it all worth it.

Edward Gorey dust jackets. I still have a few of them.

Ah, that's right, that was The Enemy. I didn't find out until years later that the movie Yentl was based on a Singer story. Weird.

"these were stylistic experiments rather than full short stories."

I found that to be the case a bit too often for my liking in the SHADOWS and WHISPERS anthologies. I still have a warm, nostalgic spot on my heart for them -- and as you rightly point out, there are some fine tales in each volume -- but sometimes the shadows and whispers were just a little too quiet, a bit too obfuscating, for my tastes. Of the two series, though, I did prefer the SHADOWS anthos over the WHISPERS anthos, generally speaking...but Schiff did give Grant a run for his money.

I have all the WHISPERS paperbacks, but only two SHADOWS paperbacks. WHISPERS veers into dark fantasy more than I prefer but I enjoyed the first volume immensely.

UPDATE: Have acquired a pb of SARDONICUS, review to come!