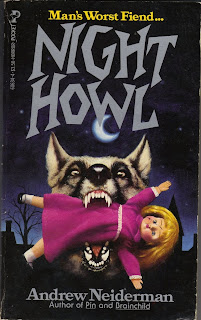 A paperback bestselling author whose novels encompass not just horror fiction but also mainstream suspense thrillers, Andrew Neiderman's work from the 1980s is a cornucopia of generic paperback cover art. Last year I read and enjoyed the creepy Pin, which got right under my skin with its detached, clinical vibe. Out of the works here I'd say only Imp (1985) looks interesting, even with that caveman's effed up arm (did the artist--Lisa Falkenstern--not think to draw him holding the stuffed rabbit with his left arm?); otherwise it's nothing but nondescript titles, little kids and stuffed animals and skulls, all fit more for teenage girls at babysitting jobs than for my tastes (no surprise that after the death of V.C. Andrews, Neiderman became her ghost writer). The hungry maw of Night Howl (1986) looks suitably tasteless but still eye-catching. And yet... what's up with Brain Child (1981)? Rabbits? Doesn't make a lot of sense whatsoever. And after the incest-themed Pin, I'm rather terrified - in the bad way - to find out more about Sister, Sister (1992), so let's just leave it there, okay? 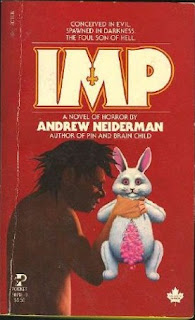 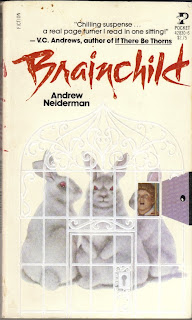 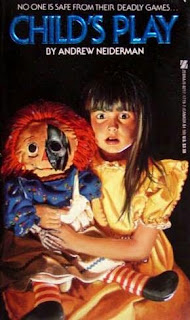 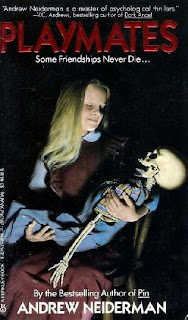 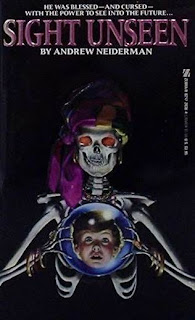 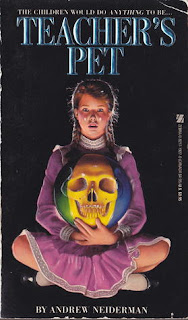 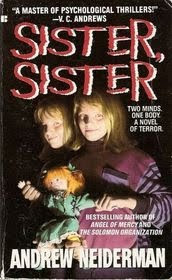 Posted by Will Errickson at 2:43 PM

These are just hysterical (or my sense of humor is very odd indeed).

Sad to say, I own all these(and more). The only one I ever cared for (not listed) is one called TENDER LOVING CARE, just because I had know idea where the madness of the whole thing would end. The BRAINCHILD-wonder-of-a-cover comes from the plot of a girl whose experiments with small animals gets tedious, and she ends up using her stroke-victim father as a sort of test rat in a science experiment (great dark premise, lousy book).

Ugh!
We've had this conversation regarding Neiderman's work before Will & my opinion hasn't changed in the least.
Obviously the man's work was appealing enough to a certain portion of the genre novel buying public to allow him to make a steady living under his own monicker as well as that of VC Andrews. So, good for him.
But, his appeal is a total mystery to me.
Thanks for reproing a handful of those old Zebra covers of his. I'd forgotten he was quite so prolific for them.
Isn't it fascinating how they were able to sell SO many books by SO many different authors by using just a few different combos of the same themes on their covers?
I convinced that their art department must have made a game of it by writing out words on slips of paper like skull, skeleton, doll, stuffed animal, child, rocking chair, tricycle, tossed them randomly into a hat & made a cover of whatever crazy combo came out of it that day... LOL

I *hated* covers like this back in the day, and still sorta do; I'm just trying to archive 'em all now! Purely academic.

Nice article ,thanks for the information.

Will,
Have you seen the film version of PIN? It's quite well done-and sad and creepy too.
But yeah I'm not interested in those covers at all. And never liked most 80's covers. Since they all came from this nadir of imagination template. IMP might be fun to give a look-see? And Sister, Sister maybe-is it me or does it look like a young Jodi Foster was used as the model for that one?

I *did* see PIN, just recently on Netflix Instant, and it was pretty cool. Jodie Foster? she and Brooke Shields adn Linda Blair practically invented young girls in demonic trouble.

Other than reading Pin when I was a teenager, I haven't read any of his books. I believe I read somewhere that he has a new book coming out soon.

I laughed like a loon when I noticed that the blurb on the top of SISTER, SISTER is from V.C. Andrews. Andrews died in 1986. For pity's sake, if you're going to make up blurbs from your own alter-ego, they oughta be spectacular: "THE GREATEST WORK OF FICTION SINCE SWANN'S WAY!" "THE VOICE OF OUR GENERATION!" "A NEW MASTERPIECE FROM A MODERN LITERARY GENIUS!"

I couldn’t resist buying a copy of Child’s Play after seeing this post. Even if I don’t care for the book after reading it I think I will keep it on display next to my Child’s Play DVD just to cause confusion from people who visit my apartment.

altho the covers suggests it, SISTER SISTER is not an incest-themed book. The sisters are twins. Siamese. Cut ones. Generic premise. PIN is easily the author's best and the film is solid. I love Pin's voice in the film. Great choice. Understated. I enjoyed PLAYMATES quite a bit. Similar plot-wise to Laymon's THE CELLAR. I like trash of this nature if it pushes boundaries. Some of his stuff does.

Mock me if you will, but I actually enjoyed “Brainchild.”

I thought the premise was imaginative and the pacing satisfactory. Although I had some qualms with parts of the writing (even in third-person, he seemed to switch perspectives clumsily) I also admired other things, like how he just dispensed with the bullshit happy-ending that other writers would’ve tacked on.