Novels about rock'n'roll are difficult to pull off. When authors invent artists and their songs and try to write about the music industry from an insider's point of view they're leaving themselves wide open for criticism from a whole different type of critic: the rock'n'roll nerd. Ironically, much of rock'n'roll is about being cool, not nerdy, and if an author can't get that attitude just right, it all comes off as smug and dorky rather than as admirable, aloof, and sexy - suddenly nerds are experts on cool. Splat-pack duo John Skipp and Craig Spector's magnum opus The Scream (Bantam, Feb 1988 - remember buying it on Easter Sunday that year!), about a truly and literally evil rock group, treads this oh-so-dangerous line. But in their intensity, their passion and their commitment to outright horror, S&S overplay their hand. They try a little too hard. The Scream isn't cool; it's loud, outrageous, enthusiastic, earnest, and often quite ugly. And yet, ironically again, that is about the actual definition of rock'n'roll. 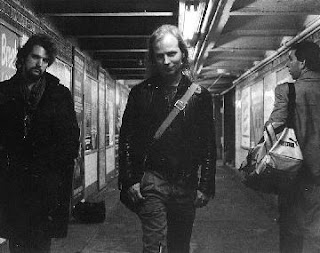 Set against a nicely-drawn '80s backdrop of "moral majority" religious groups' outrage over "satanic" rock music and their attempts to censor it, The Scream offers up a huge cast of characters and relationships. Jake Hamer, a Vietnam vet, is now leader of a popular rock group; Jesse Malloy, girlfriend of Jake's guitarist, desperately trying to get an abortion; Pastor Furniss, the Falwell-esque religious leader out to bring down rock'n'roll; as well as band members and wives and exes and kids and groupies and bodyguards. And then there is the Scream, the mysterious titular band whose album The Critical Mass has kids coast-to-coast mad with rock-star obsession. But there's something more to them than just cocaine and limos and blown-out amps and a stage show that would put Live After Death-era Iron Maiden to shame, something dark and eternal, and a lead guitarist who quite admires the Marquis de Sade. 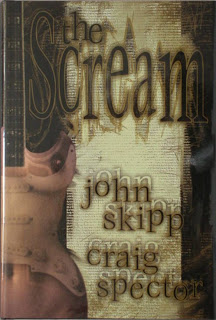 
The Scream might be a bit overlong in its inter-connecting character arcs, the prose might be informal and sometimes painfully amateurish, but it has energy and drive and bloodshed to spare, and a positively Dantean climax. Not for nothing was this sub-sub-genre of '80s horror dubbed "splatterpunk." Its main characters are treated with some sympathy; its behind-the-scenes nuts-and-bolts have credibility; its Vietnam War flashbacks are effectively intense. In fact, parts of the novel made me think of a mashup between Oliver Stone's The Doors and Platoon, but with George Romero happily stepping in to direct scenes with the Screamers, the zombified, maniacal, and supernatural followers of the Scream:

The Screamer lay in a long skid mark of gore, twitching and flailing. His spinal column had been sheared away between the fourth and sixth vertebrae; his lower half dragged uselessly behind him, connected only by ruined tendrils of muscle and skin. The white fluted ends of his shattered spine jutted out into the cool night air... But the lunatic howl that spewed forth from his lips was somewhere between a laugh and a howl...

Over 20 years later, of course, all this is ripe for hipster humor; something like The Scream can be seen on Adult Swim now in the guise of Dethklok from "Metalocalypse" and their murderous and blood-drenched - yet hilarious - gorefest performances. But in the '80s, man, people were totally terrified by this heavy metal stuff, and I kind of miss that. 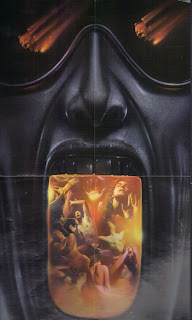 And I recommend looking for the first edition paperback because it comes with this totally bitchin' pull-out mini-poster (by Stan Watts) just like rock albums from days of yore. Done by an artist who actually read the book, too.
Posted by Will Errickson at 7:28 PM

This reminds me of a rock'n'roll novel I just finished up, also from the 80's: The Armageddon Rag by George R. R. Martin. Splendid horror/mystery/music mash-up--great book. You should check it out.

On a side note, I haven't commented on any of your posts yet, but I wanted to thank you for such a quality blog. Been following it for a while now, and I love it.

Thanks for the compliment, Todd, glad you're digging the site. I appreciate the recommendation, too; never heard of that particular book by Martin. I read a summary of it and it sounds really cool so will be on the lookout. It kinda reminded me of another fantasy/rock'n'roll novel, Glimpses by Lewis Shiner.

I've only read one S&S (THe Light at the End) and couldn't get through it.

Anyone suggest a good S&S title, or can I just be content in the knowledge that I'm not really missing that much?

If I hadn't read S&S as a teenager I don't know how much I'd like their stuff reading it for the first time as an adult, more "sophisticated" reader. Definitely can strike some as dated and adolescent. Some of it still rubs me the wrong way. One of their last novels, The Bridge, has actually been reprinted this year. That might be a good sign, so you could try that if you're so inclined. But S&S were an essential part of what horror was in the late '80s, for better or worse.

Another stellar review, sir. Gore and rock music seemed to be quite the combination in the 80's. The title I usually hear tossed around in regards to this is "The Kill Riff" by David Schow. Have to admit that the only "splatterpunk" material I've read are The Books of Blood by Barker. Seems like a genre I could dig upon more reading.

By the way, I like how you mentioned how terrified people were of rock'n'roll. It made me think about all these generations past. First there were comic books, then rock music, and now video games seem to be the new thing. Could make for an interesting sociology paper on how people tend to blame and vent their fears and frustrations on one concentrated group.

Yeah, thanks. Splatterpunk is not my thing. I like horror pulp, exploitation, and the well-written creature novel.

Have THE SNAKE by John Godey coming in the mail. Looking forward to that.

I definitely plan on covering Schow's novel, as well as his short stories, in the future. And while rock'n'roll and horror *seem* like a perfect match, it somehow doesn't often work. What rock star would want to kill/sacrifice his own fans, the ones who buys his records and pay for tickets and merch? It doesn't quite jibe, does it?!

try The Spider's Kiss by Harlan Ellison. it's not really supernatural or horror but it's probably one of the first novels about rock and roll and depicts, basically, a sociopathic Elvis

Oh man, The Scream is such a great book. This blew my freakin' mind when I was a kid.

Oh, yeah, Spider's Kiss... think I've got a couple copies of that on my Ellison shelf.

When I read this review the other year I knew I'd have to read The Scream someday, but just never got around to ordering it -- and that one brief span of time I was into horror fiction the other year I couldn't find it at any of the local stores.

But I've been bitten by the bug again and guess what, came across a copy of the book at a local Half Price Bookstore the other day...man, this looks like everything I could want from an '80s horror novel. And that mini-poster inside is great, what an awesome touch! Now the only issue is working it into my action-series reading schedule...

The other question is, I wonder if Danzig was a fan??

Oh, and I read Martin's Armageddon Rag back in the '90s, got the hardcover edition from the library. I don't remember too much about it, but I do remember enjoying it, but it's the only Martin novel I've ever read.

One thing I remember chuckling about is that the protagonists are in a heavy rock band that Martin describes as sounding like Black Sabbath, yet we're informed they were the most popular rock group of the '60s and early '70s -- yes, even more popular and critically-respected than the Beatles!

It isn't much like Shiner's Glimpses, another one I've read. Of the two I'd have to say Glimpses is better, mostly because I read it twice and therefore remember it more!

I bought a copy of Martin's book recently, looking forward to it.

Ah, yes, GLIMPSES! So cool. I have a writer pal who's good friends with Shiner, so I was able to get a signed copy from him!

Well,guess there's no point in only reading reviews that mirror my own take on a book, but I read a lot of horror novels and while The Scream ain't the best I've ever found, it's sure been my steady favorite for 25 years. Damn near a seminar in how to get it full-tilt, balls to the wall, bat-shit PERFECT, for my money. S&S never came near that height again, but most never even do it once. Of course, that's just one freak's opinion...

That's one freak's opinion I totally agree with! It was an unexpectedly fun reread.