The Surrogate by Nick Sharman (1980): Father Do You Wanna Bang Heads with Me 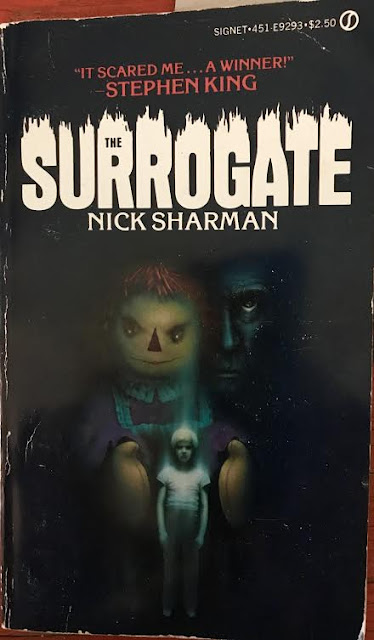 Malevolent doll alert! Yes indeed, that mainstay of '80s horror fiction is at it again, a supernaturally-possessed innocent child's toy goes on a murderous rampage, controlled by the evil whims of a man so hateful and angry and resentful that he operates from beyond the grave. Nick Sharman (aka A.G. Scott, both pseudonyms of Norwegian/British author Scott Grønmark) also wrote Childmare, an intensely grim novel of a teenage riot in the James Herbert tradition. I found that novel to be solid horror entertainment, so have been looking forward to The Surrogate (Signet Books, July 1980) for some time now. The cover is replete with the coming  (and going) decade's hallmark imagery: solitary child, evil doll, leering old man. Oh, and the requisite King blurb at the top, too, almost literally overshadowing the actual author's name!

Unlike Childmare, Surrogate is an intimate affair, with only a few characters and smaller stakes. The prologue is a banger, with a defiant boy being locked in a cellar room with rats for disobeying his terrifying despotic father in their huge estate home. Next we meet 30-something Frank Tillson, that little boy now grown. He is a radio talk-show host and is raising his eight-year-old son Simon alone after the death of wife and mother Kathie. Frank is driving back to the family estate, which he has not visited in many years, after the death of his own mother. Summoned by long-time family caretaker Reece, Frank reluctantly goes to see the old man, now being ravaged by cancer and at death's door. The reason? Why, his father's riches, who is to inherit them? The thought of taking his father's money sickens Frank, but the old man has found a loophole: he will leave the fortune to Simon upon his 18th birthday. Frank thinks the man has gone senile, and flatly refuses to hear of this idea. "When you're gone there'll be no coming back," Frank responds (foreshadowing!). "What you've built dies with you. For God's sake don't try and involve the living." 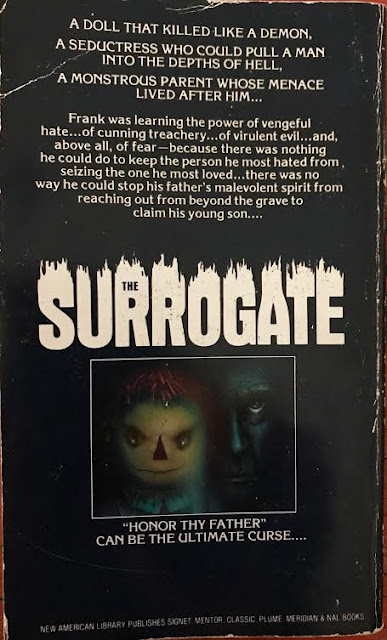 For awhile Sharman is slow to boil the pot, letting the reader experience Frank's daily life as a single, attentive father and as a popular radio talk-show host. Simon is introduced, a well-meaning, polite boy who quietly still mourns the death of his mother. Watching him read endless comic books, Frank wryly hopes he's not "rearing a pop culture junkie." Frank has never told Simon about his hated relation, ever, and when he does now the boy seems uninterested... until he's accosted at school by a man he doesn't know speaking about an obligation. Frank is enraged but not surprised that his father would stoop to such a trick. He phones Reece, who tells him his father did take a drive, but it proved too stressful and he's now in a coma, death expected soon. "Phone me as soon as he dies, Reece, I want to know my son is safe."

Frank escapes into his work, where we meet his producer Eddie, a likeable, middle-aged man of slovenly appearance and hedonistic tendencies tempered by a solid work ethic. His assistant Angela, a timid woman that Frank holds in some contempt for her incompetence if not her sex (and the mystifying allure she holds for Eddie). Sella Masters, an American beauty, is a psychic guest on one of Frank's shows; Frank is amazed to learn she is sincere about it: "You can't believe all this psychic nonsense. We're all adults here you know. Level with us." She agrees to a demonstration of her sixth sense and, as any astute reader will expect, it turns out gut-wrenchingly horrible when she sees the car accident that killed Kathie as well as her funeral, and at the funeral an old man in black watching Simon...

Interrupting this scene of awkward horror there's a phone call for Frank: it's Reece. The old man is dead. One of the enjoyable aspects of the novel is the vintage manner in which everyone drinks and smokes after a shock or while debating supernatural phenomena, and that's just what happens now. And more mysterious events pile on: a spooky figure in some photographs (Frank's a cranky sort, thinks of complaining on his show about a shop that can't develop photos right); malfunctioning radio equipment that screeches in the voice of an angry old man; a wad of cash mailed to Simon; a terrible dinner with Eddie and Angela that leaves Angela screaming and saying she saw a corpse climbing out of the bath; all that sort of thing, all rendered in a staid, realistic style that's neither pulpy nor literary. 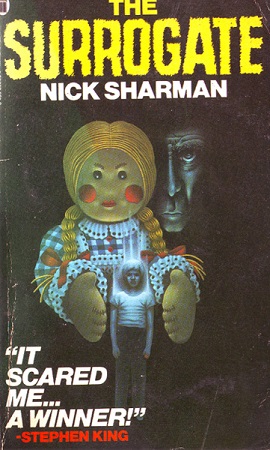 1981 New English Library ed with different doll,
not sure why, does Raggedy Andy not translate?

Soon, sadly, Frank begins to suspect Eddie and Angela are behind these spooky intrusions into his and Simon's lives, sort of Scooby-Doo style, even while Sella the psychic is telling him that Simon is in real danger from his grandfather who is now on the other side, or what have you. He will not be denied! Frank's not crazy about that explanation: "The supernatural doesn't fit into my pattern of beliefs." "Screw your beliefs, Frank!" Sella half-shouted. "We don't have time for that pompous bullshit. You've seen things, for Christ's sake. You've been attacked by a frigging doll!" Ah yes, the doll! Wow, I won't spoil it, but that attack scene is pretty sweet, written in that tone that refuses to acknowledge the ridiculousness of the scenario. Sharman goes it with dead seriousness, knowing that any wink will deflate the horror (The doll glided toward him along the carpet. There were no individual limb movements, it just... glided). The toy once belonged to Kathie when she was a child, so its possession is extra obscene.

The climactic confrontation between father and son successfully brings together all that has come before, and doesn't overstay its welcome. We learn some horrible stuff about Frank's parents' relationship, the death of his mother, that sort of thing. The supernatural explanation seems the only rational one after Simon disappears, and Frank has to make a final trip to the family home he so despises. Some violence and gore, racy sex scene, not bad. The final pages is dark stuff, man. "What's worse than death, Sella?" he demanded again, fury building up inside him. "The boy's alive, Frank," he heard...

Sure, the reader will notice lapses in believability, like even though Frank is desperate to find his son, there are moments when he's like, "Oh he's probably back at the apartment" or something along those lines. These child-in-jeopardy plots don't work today; we can't really exploit them for suspense any longer since the reality is so unbearable. Dialogue, too, is creaky, the old amateur mistake of having every character say each other's names a dozen times in one conversation. The novel would've made a cracking good flick during its day, certainly not a classic, maybe in the style of adaptations of The Sentinel and The Manitou, with a virile British lead (Alan Bates? Albert Finney?) and maybe Jane Seymour or Jenny Agutter as Sella (doing a half-assed Yank accent). The novel is barely 250 pages, and even that's padded out some, but for a diverting vintage horror read, The Surrogate is a solid choice.

Frank then saw another narrower passage leading off to the left. The stench was thickening. It was almost tangible, as though the basement complex were his father's diseased insides and he [was] approaching nearer and nearer to the center of corruption.

Love me some evil Raggedy Ann the other doll just don't do it for me. Could have been copyright issues?

I have The Surrogate, The Switch, and Steel Gods, all unread even though I loved The Scourge.