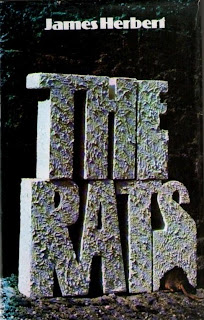 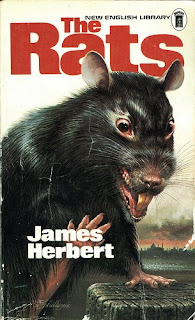 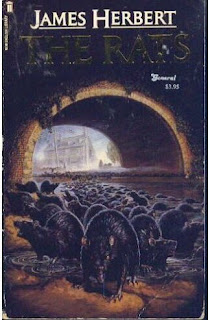 Herbert plunges into his novel without apology or surcease (or, as Stephen King put it in his 1981 horror memoir Danse Macabre, he "does not just write, he puts on his combat boots and goes out to assault the reader with horror") and the result is a really enjoyable piece of pulp horror fiction, barely 200 pages long. The various set-pieces of carnage - a primary school, the tube, a movie theater - are well-conceived and executed, filled with as much blood and bits of bodies and grue as he could get away with. The climax is a corker. And it all works.
Introducing a new graphic sensibility in horror fiction (and which Herbert continued in his second novel The Fog, which I will be rereading soon), The Rats is a quick and a satisfying read, a slight guilty pleasure and, I'm happy to learn, the first in a horror-fiction trilogy. Cheers, mate!
Will Errickson at 7:40 AM
Share