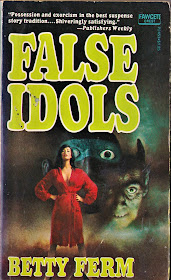 Remember that scene in 1979's Love at First Bite in which Richard Benjamin, the Van Helsing character, attempts to thwart George Hamilton's Dracula by pulling a crucifix from his pocket—but mistakenly takes out a Star of David? When I saw the movie as a kid I didn't get the joke, but it's a good one. Jewish-themed horror is, alas, the tiniest of subgenres in vintage horror fiction, and it can be done well (or, like anything else, not well), but I don't think it's been done enough. This explains why I was intrigued by this back cover copy hinting at a Jewish, rather than a typical Christian, origin for the otherworldly horrors and chilling premonitions promised here. Alas, there's not much going on, Jewish or otherwise, in False Idols (Fawcett Crest paperback, June 1975), a 1974 supernatural thriller that fails to thrill or do anything much at all. False is right. 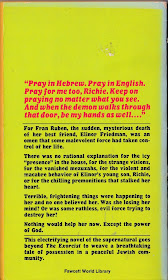 Everything is leftover Levin and Blatty: the dash of social concern, a whiff of current mores, but nothing goes deep. Familiar elements are all-too-smoothly cobbled together from those better works, from Dark Shadows, soaps, TV movies, commercials, et al. (Similar contemporaneous novels by Ramona Stewart and Barbara Michaels are smarter and spookier too). The upper middle-class setting is bland and rote, and no ethnic flavor is to be found to give the novel its own identity. Our tale goes from bad to worse as soon as Fran, our beleaguered protag, leaves the home to return to the work she left behind once married, and it's the South American maids with their "almond eyes" and "faint musky scent" who cause all the demonic trouble. It's hard to get good help these days!

Mezuzahs replace crosses and the terrified old mother-in-laws shrieks about the Dybbuk, some Jewish grieving practices are only slotted in, that's all, surface details only. The possessive demon hails from Mesoamerican Incan mythology: Taguapica by name, and boy does he have it in for the Old Testament God: "Look around you, Yahweh. Your world is dead as you are dead to the world. It is Taguapica who will reign now" he bellows in the overheated climax. It's the kind of comparative religions scenario Graham Masterton would crank up to 11 in just a few short years. Maybe the novel had some effect for readers in its era as a decent enough time-waster, but nearly half a century later False Idols is simply a dull, unremarkable artifact from a bygone age. 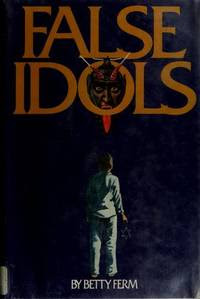 Psychiatrist Livvy Webber—the kind of smart, helpful, good-hearted character you just know is toast sooner or later—actually says at one point early in the novel that "Each time a Rosemary's Baby or an Exorcist hits the market I can be guaranteed a number of new patients who lay claim to related phenomena as the cause for the fouled-up lives." More of this contemporary self-awareness would have given a fresh coat of paint to our tired tale, which lasts a scant 174 pages. The ending is not an ending, it's all still going on, you know how it goes.

Speaking of coats of paint, at least the paperback offers up eerie cover art thanks to the masterful George Ziel, although the lusty, brazen, confident lady in red never—sadly—makes an appearance.
Author Betty Ferm (1926-2019) wrote nearly a dozen novels in various popular genres (see some below) and taught college courses in writing suspense novels. 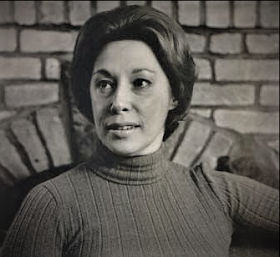 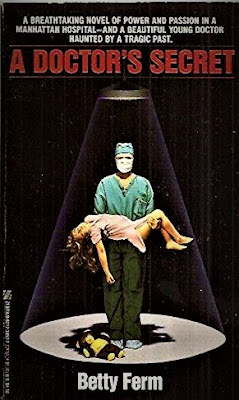 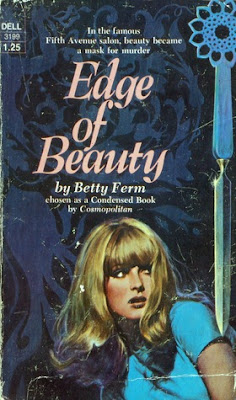 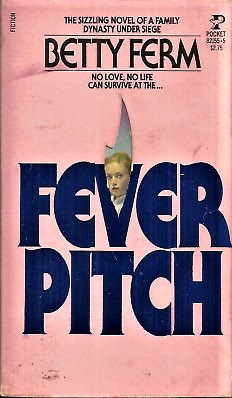