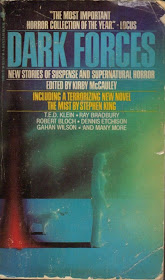 I don't think I'm overstating when I say that Dark Forces was the most important anthology of short horror fiction of its day. Editor Kirby McCauley went far afield with familiar horror/fantasy/SF names like Richard Matheson, Ray Bradbury, Theodore Sturgeon, Ramsey Campbell, and Robert Bloch, to contemporary literary writers Isaac Bashevis Singer and Joyce Carol Oates, to then-new folks like T.E.D. Klein, Dennis Etchison,and Lisa Tuttle. This tasteful bit of editing revealed a breadth and depth to horror fiction that hadn't really been seen before; stylistically the tales are pleasingly all over the place and therefore still a must for the horror fiction fan. Somehow I missed out on it during my days of reading nothing but horror. It's now out of print but widely and cheaply available in a not-too-fancy hardcover and several paperback editions. 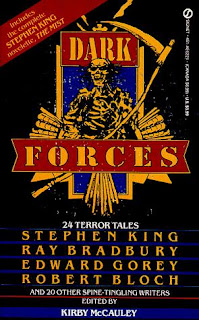 This was when horror started to try to gain respectability as a literary force; Kirby McCauley was King's editor and ambitious novels by folks like Peter Straub were bestsellers at the time. Certainly including Oates and Singer, two highly-lauded writers of mainstream literary fiction, didn't hurt. While Oates's contribution, "The Bingo Master," is well-written and has odd moments, Singer's "The Enemy" operates in that dreamtime of myth and fable, like an old Jewish legend that speaks of the timeless evil nature of man. Bloch's "The Night Before Christmas" is a snappy tale of vengeance complete with the type of pleasantly groan-inducing pun he's known for. Gene Wolfe, Davis Grubb, Robert Aickman, and Manly Wade Wellman contribute oblique, darkly fantastical tales that are powerfully imagined, original, and genre-broadening. Two of my favorites were Lisa Tuttle's "Where the Stones Grow" and Karl Edward Wagner's "Where the Summer Ends." I could go on and on about these stories, and still have a handful left to read. 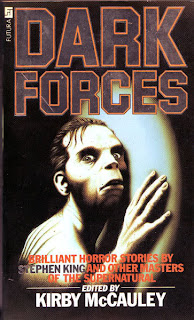 The cornerstone here is, of course, Stephen King's novella "The Mist," which appeared, slightly changed in the final sentences (which do nothing to the plot), in his Skeleton Crew (1985). The morning after a violent thunderstorm, a glowing wall of white mist creeps across and envelopes a rural Maine town. There are things in the mist. Things from a madman's prehistoric nightmare. Like a classic Twilight Zone episode it forces common people to bond against an uncommon enemy. As the lead story, its famously ambiguous ending seems to affect the rest of the stories in Dark Forces, as if tendrils of that mist drifted throughout them. 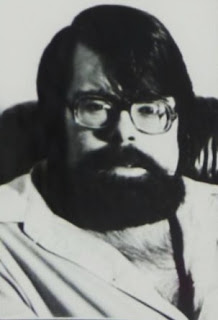 King's humble, near-utilitarian prose, vividly-drawn characters, and first-person narration bring a flat believability to the events. While King has described it as little more than '50s-style low budget monster movie, the futility of virtually every action the characters take casts a pall of hopelessness and despair over the proceedings. It was probably 1986 when I first read "The Mist" and it has never ever left me; I can recall sitting in boring high-school classes, staring out the window and trying to will that mist across the streets of my hometown. Horrible, I know, but man, "The Mist" got in there early and it got in there deep.

As for the paperback cover at the top (Bantam Dec 1981), I assume that the mesmerized woman is gazing off into that mist, although if she is expecting any sort of transcendence or transformation, she is going to be sorely disappointed. Snipped in half or burnt by acid or eaten alive, too. So, you know, look out, lady. 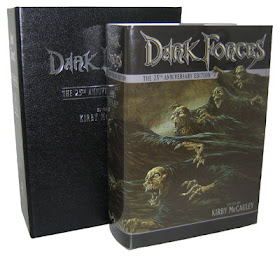 25th anniversary limited edition from Lonely Road Books
Will Errickson at 9:41 AM
Share