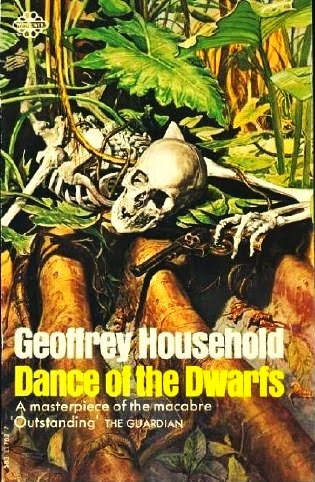 Nothing pains me more than being unable to finish reading a novel, for whatever reason. Picking books off my horror shelves and finding them less than captivating is a real bummer; I like to keep this blog updated with new reviews, but sometimes I read several novels in a row that I'm simply underwhelmed by, and motivation to finish flags. Here are the last four I couldn't finish (four! Ugh). Now, don't get me wrong, these aren't novels without merit, so I feature them here with the thought that some TMHF readers might find them worthwhile. 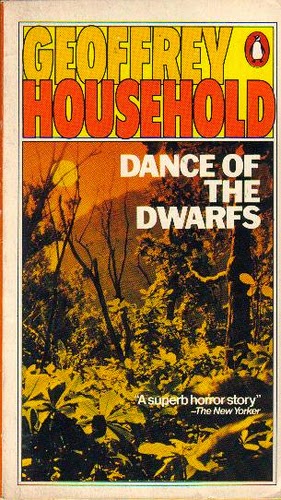 Dance of the Dwarfs by Geoffrey Household (1968). I'd heard plenty of good things about this novel, some from TMHF readers. It's been in my collection for five or six years; I'd bought it on a whim knowing nothing about it except it was shelved in the horror section of my local bookstore and didn't look like your average genre paperback. Subtle, literary horror? Sure! It sounded fascinating: a British doctor living in an agricultural station at the edge of the Amazon, where the locals are afraid of... what? Dwarves that dance? The novel deals with superstition, fear of the unknown, the nature of fear itself, cultural imperialism, political wranglings, and all that, and Household is a good although detached writer. Sure, there were other things going on, like said doctor constantly banging a 15-year-old Peruvian girl given to him as a gift.... but everything just took. So. Damn. Long. To. Happen. Guess that's what I get for trusting The New Yorker about horror. 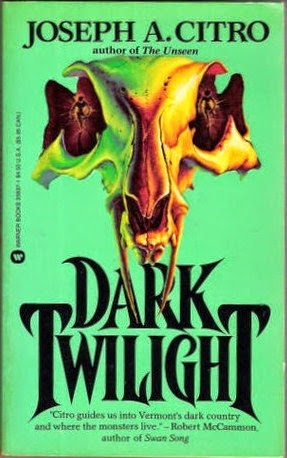 Dark Twilight by Joseph A. Citro (1991) Not terribly written--it has pages of respectable critical blurbs--but not terribly interesting either. Citro is an expert on the legends and lore of Vermont, but so what? I have no especial interest in cryptozoology or any kind of  "monster hunter" scenario, just as I have no interest in writers who take real life "psychic" phenomena or other pseudoscientific nonsense and try to turn it into a horror story. I'm a hardline nonbeliever and atheist in the HPL tradition and, like him, I'd rather writers make up their horrors entirely (or, of course, swipe someone else's!). That said, there was too much folkloric exposition from an old professor and too little folkloric horror action so I gave up halfway through. 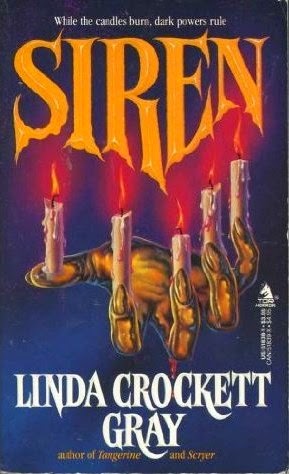 Siren by Linda Crockett Gray (1982) Opening chapter has a father forcing his 11-year-old daughter to give him a hand job. Not my scene, man. I don't care how awesome the original cover art below is. 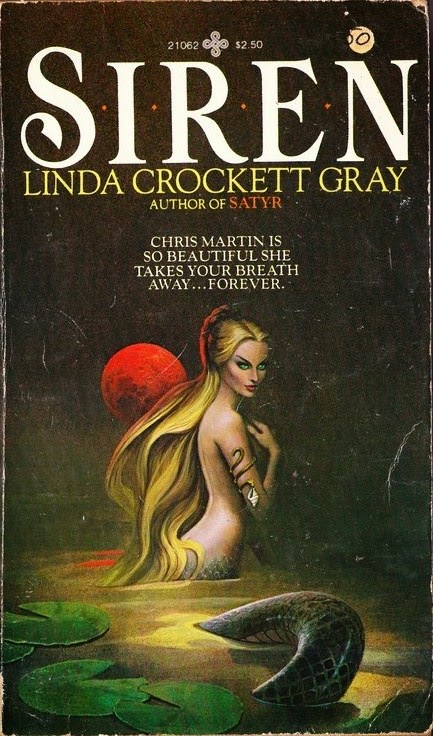 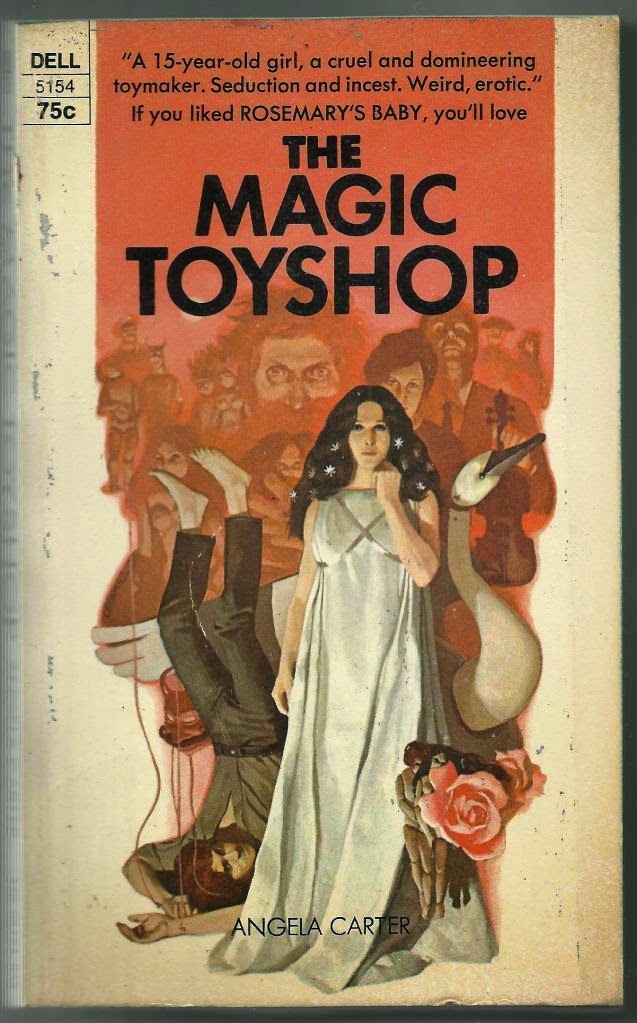 The Magic Toyshop by Angela Carter (1971). Toyshop is the only title here I might give another try; it really sounds like something I'd dig, kinda Shirley Jackson-esque. I am of course well aware of Carter's reputation and standing in the literary community and that she takes fairy tales and updates them through a feminist/postmodern lens and so on. Awesome. But I found the style, story, and its telling to be pretentious, precious, and precocious ("She was too thin for a Titian or Renoir, but she contrived a pale, smug Cranach Venus with a bit of net curtain wound round her head and at her throat the necklace of cultured pearls they gave her when she was confirmed. After she read Lady Chatterley's Lover, she secretly picked forget-me-nots and stuck them in her pubic hair"). Yes, my tolerance for "writerly" writing has waned; to me it's akin to the acting style Jon Lovitz used to parody in his "Master Thespian" SNL skits--the prose simply shouts "Wrrriting! Brrrilliant!" at me, and who likes to be shouted at, no matter how pretty the words?

Again, these titles are simply not to my taste, but I don't consider them, you know, not good.--some of you might like 'em just fine. Let me know what I'm missing, huh? Thanks.

Posted by Will Errickson at 1:27 PM

You know, I hate to be the one to say it, but if you haven't finished Dance of the Dwarfs then you're missing out on one of the great reveals.

I thoroughly enjoyed Carter's collection THE BLOODY CHAMBER (reviewed it on the blog, too), though I hesitate to suggest that you won't be getting more of the same. Granted, I don't recall coming across any passages that were quite *that* choked with allusion, but for as much as I really, really liked it I'll cop to having felt like I was reading an ambitious student's submission for their creative writing course at times.

Still, it being a short story collection may allow you to dip your toes in every now and then to see if you dig the scene.

I've left a lot of contemporary novels/collections unfinished, but have had better luck with 70's/80's/90's books.

I actually just rescued THE MAGIC TOYSHOP from the children's section of the recent library booksale. Perhaps I should have left it in there and waited for some sort of enjoyable kerfuffle...

Have to agree with Adam. I can understand why Dance... could be difficult to get through. It's a very slow boil but I found it fascinating regardless. However, the end reveal is stunning. When the "dwarves" are first revealed, you might be tempted to laugh or even just screw up your face in confusion but when it sinks it... damn, I still get chills from it. To be fair, Dance of the Dwarves isn't traditional horror by any means. It's a work all it's own and one of my favorite novels. I can't promise you'll like it but you should finish it.

There's a movie version of Dance of The Dwarfs, with Peter Fonda. I remember liking it when the USA Network showed it on "Saturday Nightmares" or whatever about 20-some years ago... but, I'm not sure how it'd hold up now. And I haven't read the book, so I'm not sure if the movie was faithful to it at all. It's pretty obscure nowdays.

The film version of Dance is very, very far removed from the novel. Precious little remains other than the setting...and even that might be off, I can't really remember. However, know that the "reveal" in the film is not at all the culprit of the novel.

I have 5 novels I'm trying to finish right now. Time, it is a precious thing. Took me 30 years to finish Melmoth the Wanderer.

I read The Magic Toyshop a long time ago and remember liking it.

The first scene of Siren is absolutely horrifying... it's like a fucked up rite of passage to get through it. Once you make it, though, there is some satisfaction in knowing that the mermaid shows up in the molester's dreams and punishes them hardcore.